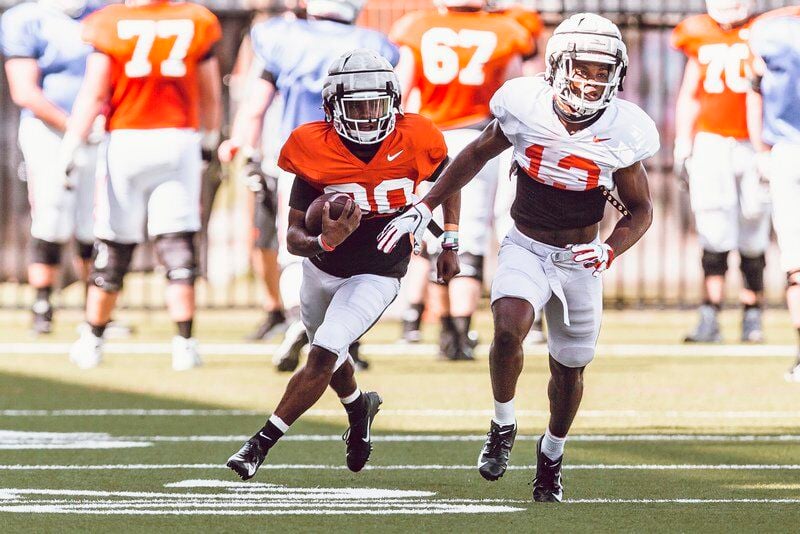 Bruce Waterfield/OSU Athletics Oklahoma State true freshman Brennan Presley, left, is listed on the three-deep as a punt returner and as a wide receiver heading into the season. 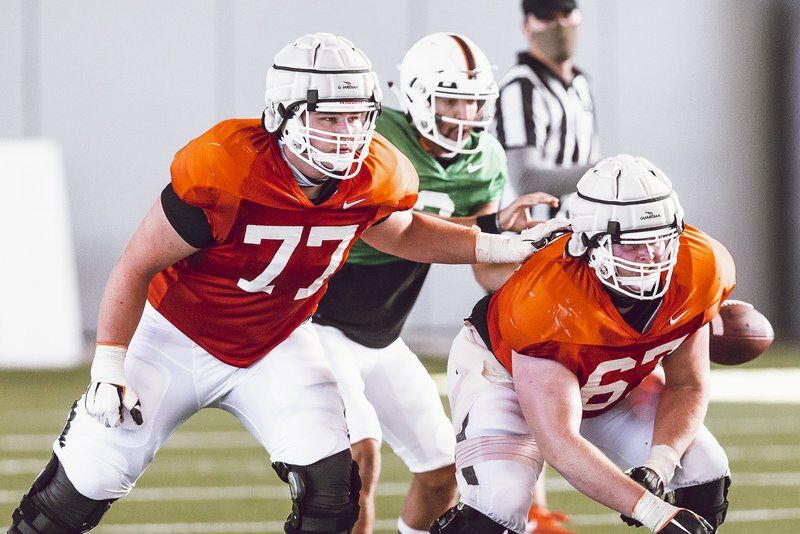 Photos by Bruce Waterfield/OSU Athletics In Oklahoma State’s depth chart released Monday, redshirt sophomore Hunter Anthony (77) and redshirt freshman Cole Birmingham (67) were listed as starters on the right side of the offensive line.

Bruce Waterfield/OSU Athletics Oklahoma State true freshman Brennan Presley, left, is listed on the three-deep as a punt returner and as a wide receiver heading into the season.

Photos by Bruce Waterfield/OSU Athletics In Oklahoma State’s depth chart released Monday, redshirt sophomore Hunter Anthony (77) and redshirt freshman Cole Birmingham (67) were listed as starters on the right side of the offensive line.

The Oklahoma State football team released its depth chart Monday in preparation for next week’s season opener against Tulsa at Boone Pickens Stadium.

And with it, answers were given to some important questions – perhaps none more impactful than the starting lineup for the offensive line.

With all the defections due to health and transfers in front of Spencer Sanders and Chuba Hubbard in the backfield – and plenty of speculation of who will fill those gaps – it was all pretty much chalk, sans the right guard spot.

Protecting Sanders’ blind spot on the left end of the line will be veterans Teven Jenkins, a redshirt senior from Topeka, Kansas, is slotted at left tackle and redshirt junior graduate transfer Josh Sills, who was a former All-Big 12 second team selection while at West Virginia, will start at left guard. Ry Schneider, who has seen some starts over the past few years due to injury, will anchor the line at center.

Redshirt sophomore Hunter Anthony, who started in four games last season, will start at right tackle, while redshirt freshman Cole Birmingham showed enough in the fall camp to warrant the nod at right guard. The backups, according to the OSU depth chart, behind Anthony and Birmingham are a couple more young players in redshirt freshmen Jake Springfield (at tackle) and Preston Wilson.

“They’re young, just like you said, and they’re learning on the run,” Cowboy coach Mike Gundy said Monday. “We have moved some guys around some, so we might balance that out based on where we’re at as the game moves on.”

There is still no definitive answer as who will be the backup behind Sanders heading into the season, though there is clarity as to who the contenders are.

Redshirt junior Ethan Bullock, a junior college transfer, and true freshman Shane Illingworth are listed behind Sanders with an “or” dictating that the coaching staff has not settled on which order they slide in at the position.

Illingworth isn’t the only true freshman listed on the depth chart, as there is one other athlete the coaches already anticipate getting a chance to play a part during his first year on campus.

Bixby native Brennan Presley, the No. 5-ranked prospect out of the state of Oklahoma by 247Sports, is listed as an “or” at both wide receiver and punt return in a three-deep look at the positions.

“From Day 1, he’s been as advertised: ultra competitive, loves to play football,” Gundy said. “Fortunately, he’s stayed healthy, which is very important for a true freshman if you’re going to get on the field.

“If you get dinged up a little bit and miss seven to 10 days, it’s extremely difficult to get ready to play. So his competitive level, his skill set, and in his health has allowed him to put himself in a position to play in the first game.”

Presley is battling with veteran Landon Wolf as the backup to Dillon Stoner at the return spot, while it is the same look – Stoner followed by Wolf or Presley – at one of the wide receiver positions.

Despite being listed at 5-foot-8, 165 pounds heading into his first year at the Division I level, the size of Presley doesn’t concern Gundy.

“His willingness to do whatever it takes to be successful and he overcomes his size,” the Cowboy coach said. “So for us, we haven’t seen it become a factor in our practices.”

One noticeable adjustment within the depth chart that hadn’t been talked about this fall camp is a position change by highly-touted sophomore Thomas Harper.

The Knoxville, Tennessee, native had received high praise from Gundy during the the 2019 spring and fall camps, and ultimately go to play as a true freshman – most in special teams and as a backup at cornerback. However, Harper has slid back to the safety position and is listed as a backup to junior safety Tanner McCalister.