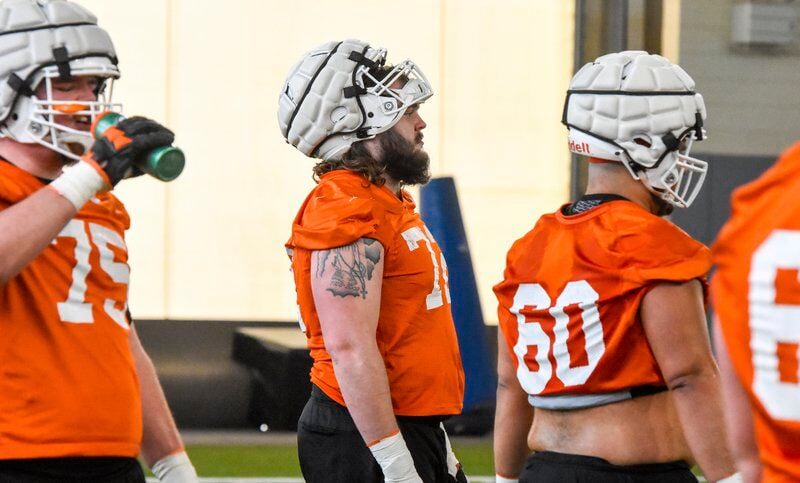 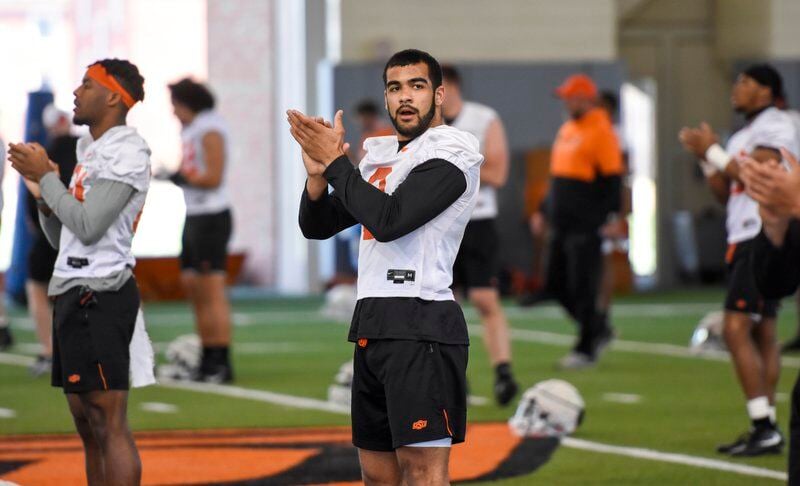 Speculation ran amuck early this year on which Oklahoma State football players would test the NFL waters or return for another year in Stillwater.

It was a mix of shock for some fans on the decisions made both directions.

But for several of the players who elected to return, it was always an easy decision to make.

“It was pretty easy for me. I talked to coach (Rob) Glass, I talked to a few other people and what I heard back wasn't what I wanted to hear,” offensive lineman Josh Sills said. “ My decision was pretty clear cut and dry with what I was going to do and I'm glad that I came back for another year."

Sills played every game for the Cowboys last year after sitting out much of the previous season – while at West Virginia – due to injury.

He quickly grew into one of the leaders on the Oklahoma State offense, showcased multiple times on the ESPN+ series “Our Time” with him vocally leading the offensive line in the locker room at halftime of games.

The easy decision gives the OSU offensive line a returning leader that would have otherwise been filled with young players lacking nearly the level of experience as Sills.

His return follows the departure of Teven Jenkins, who is being projected as a first round draft pick by most experts.

Sills has been following his former teammate’s journey through the draft process from afar, and trying to just pick up any bit he can from the former Cowboy offensive tackle.

“ I talked to Tev a little bit, more so when he was here kind of around pro day,” Sills said. “I kind of looked at it as I'd love to talk to him and kind of get to know how that kind of whole situation unfolds as far as agents and all that stuff, but at the same time, I know that he's getting bombarded by everybody. So I didn't want to call him or text him and I didn't want to feel like I was being even more of a burden to him, because I knew that he had a lot going on in training every day. ...

“So I just kind of got to talk to him when I did. Outside of that, he gave me a lot of really valuable information and just kind of told me know that it'll take care of itself, not to worry about it.”

On the defensive side, safety Tre Sterling knew well before the end of the season he would return for another year with Oklahoma State.

Sterling took to heart conversations he had with family and former teammates in guiding his quick decision.

“I mean it was a pretty easy decision at the end of the season, I knew, I think four games before the Cheez-It Bowl that I was going to come back,” Sterling said. “ Just hearing from my dad, other people who are in the league like A.J. Green and stuff like that. I'd hear from them and stuff like that and teams talking, the best decision for me was definitely to come back and build my draft stock. ...

“I was just treading unknown waters if I would've left this year and I didn't want to be in that situation and go undrafted, not make a team and something like that. So, I was just going to come back and build my draft stock as much as I can.”

So what does Sterling think he can work on to improve his draft stock?

“You can always get better as a safety at man coverage – whether it's on tight ends, slots, outside receivers – because I've been in every situation possible,” Sterling said. “So just working on man coverage more, working on my breaks out of either middle of the field, flat, curl read, hook zone, stuff like that.

“Just working on transition from being still to accelerating and stuff like that. Just doing stuff that the NFL scouts want to see.”

His running mate in the secondary, Kolby Harvell-Peel, took a slightly less conventional path to landing back in Stillwater.

Harvell-Peel, who was pegged by any draft analysts as a potential Day 2 or 3 pick, originally elected to forego another year with the Cowboys.

“I was surprised because I knew nothing about it when he declared. I was happy for him, he definitely could've been drafted – he's one of the top safeties in the nation,” Sterling said.

However, Harvell-Peel, who has yet to meet with the media this spring, reversed course on the final day for underclassmen to enter the NFL Draft.

It was a change in heart that caught his teammates a bit by surprise.

“I actually heard from Kanion Williams when he flipped, because I was picking something up from his house and he had told me that Kolby was coming back and I didn't believe him at first, and then Kolby had tweeted that he was coming back and I was just as shocked as everyone else in the nation,” Sterling said. “But I'm glad that he's back. One of the best safety trios in the nation including Tanner (McCalister), and you know we’re back to work.”