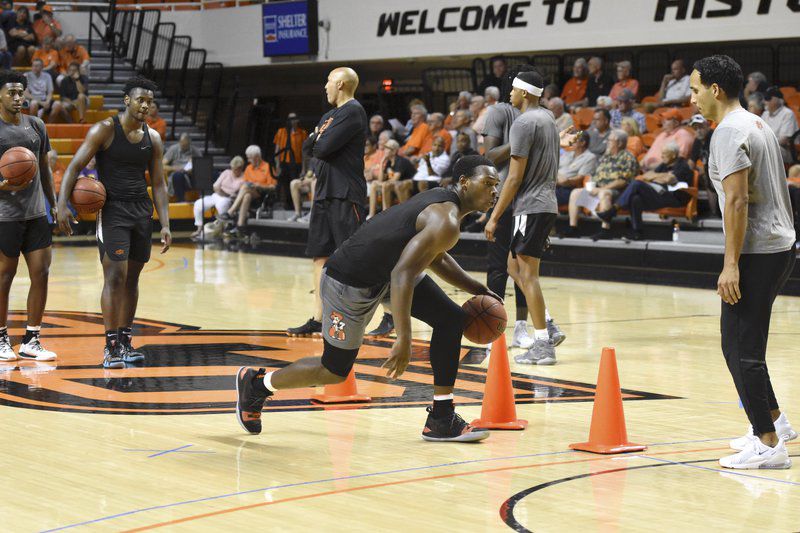 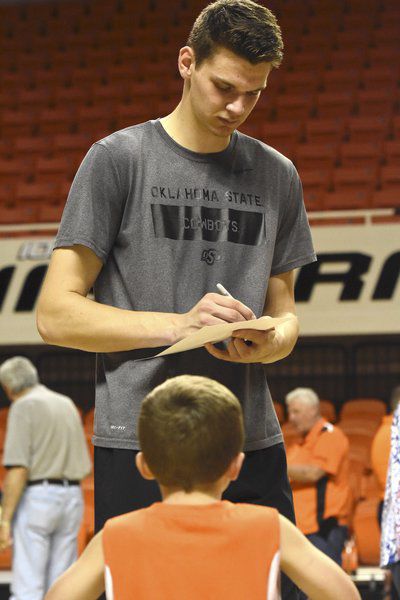 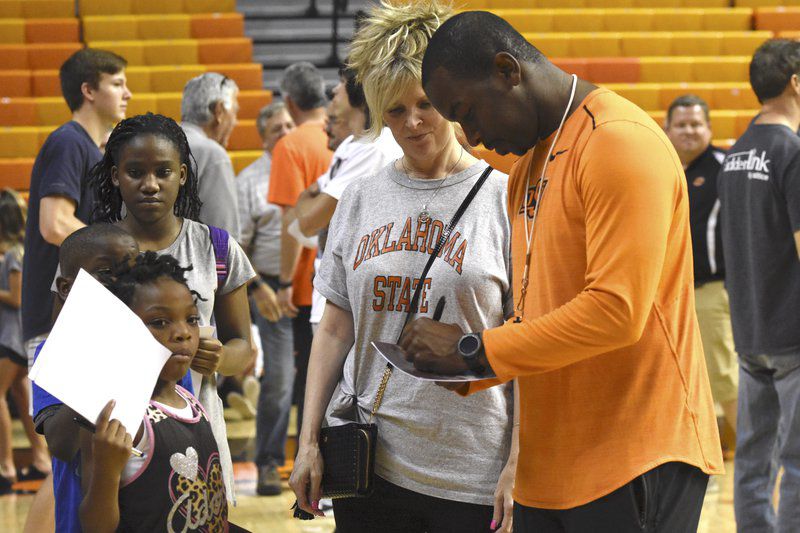 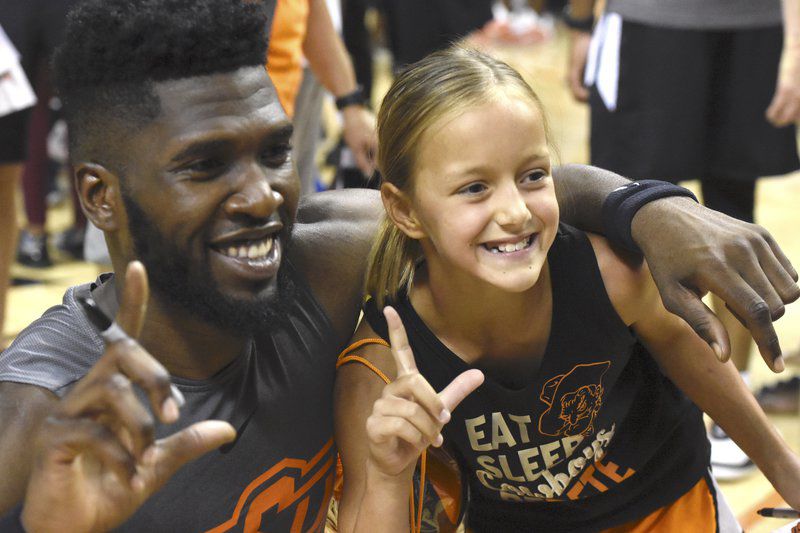 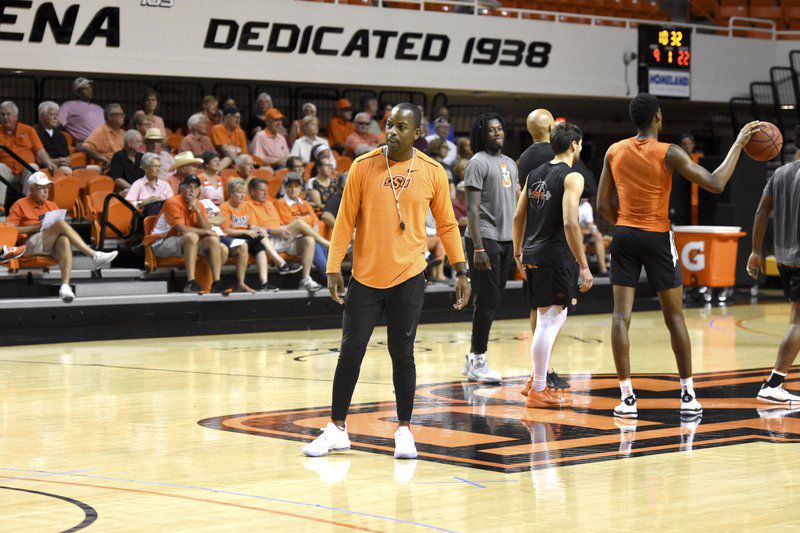 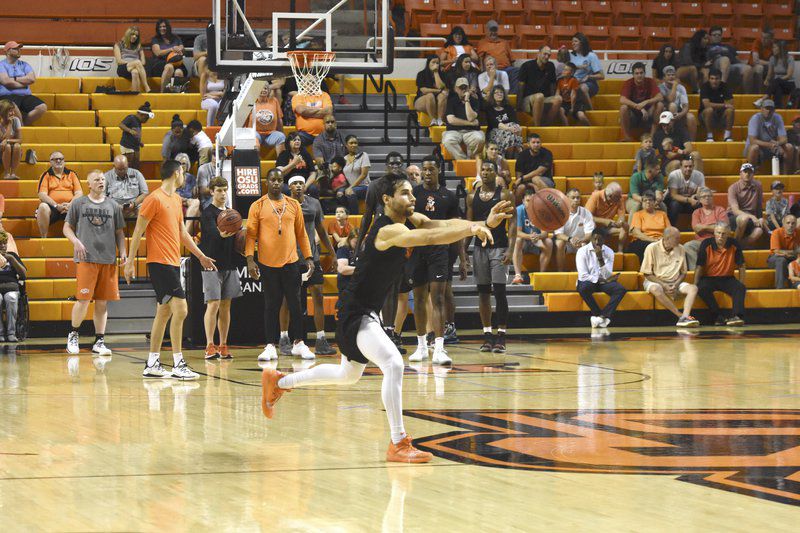 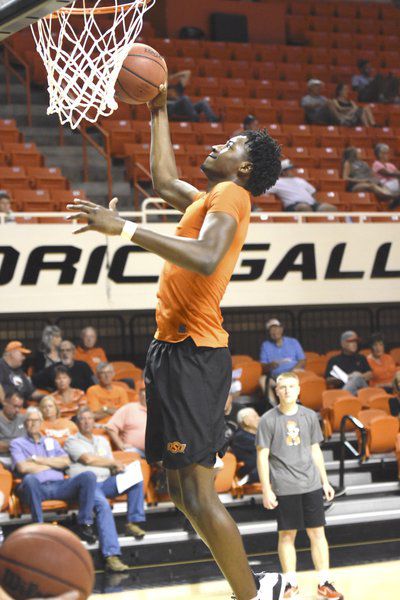 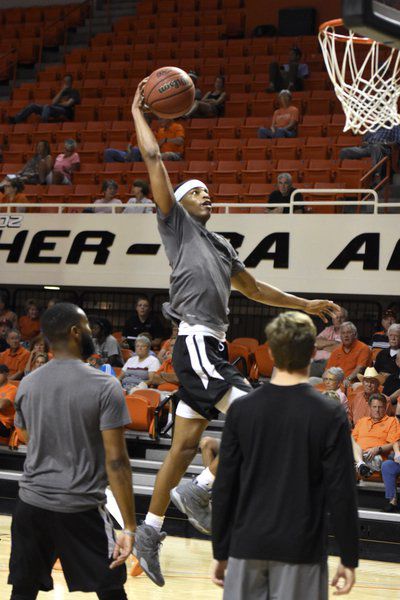 Thursday kicked off the Oklahoma State football season, which always carries a lot of hype and excitement for months in Stillwater.

However, the first practice of the Cowboy football team wasn’t the only athletic draw for OSU fans Thursday.

Happening simultaneous to the football team’s opening practice inside the Sherman E. Smith Training Center was a men’s basketball practice open to fans. Several hundred fans sat in the lower level of Gallagher-Iba Arena for 90 minutes as the Cowboy basketball team entertained with dunks, 3-pointers and plenty of enthusiasm.

The event was held in conjunction with the Cowboy basketball alumni weekend.

Freshman Keylan Boone – a Tulsa product along with his twin brother Kalib – admitted he hadn’t talked to many alumni before the practice but was hoping to meet some later, said the event energized him from what was a drag of a morning.

“Today was fun,” Keylan Boone said. “I was looking forward to it. I ain’t going to lie to you, this morning I was tired and I wanted today to be over with. Then I got here and said this is going to be fun to put on a little dunks at the beginning of warm-ups. It was fun.”

Keylan Boone added he was a bit surprised at how many fans showed up to watch the team practice, despite the season not officially starting for over another three months.

“It’s a great feeling, because that means I chose the right school,” Keylan Boone said. “I know they love this program, because I wanted to go to a school that loved basketball and have fan support. I can’t wait for the first game on Nov. 6, see this place go crazy and play my first game as an OSU Cowboy.”

Fellow freshman Marcus Watson was also happy with the hundreds of fans who came out to watch practice. Watson admitted he knows OSU fans are excited about the upcoming football season, but he hopes fans will roll their support from the gridiron to the hardwood in November.

“It felt great,” Watson said. “The energy was there. We’re usually in a quiet gym, so it’s nice to have somebody here to hype it up. It was good.”

Both Watson and Boone are part of a large freshmen class that has brought a lot of hype to the Cowboys’ program. They came in this summer and have been working hard to develop their bodies and their basketball skills.

Thus far, it’s been a good, but challenging process.

“It’s been hard, real hard, a big transition from high school,” Watson said. “You have to come in and be ready to work. The guys always encourage you and are great teammates. I love the coaching staff. They’ve been there ever since day one. … I love my teammates. They keep pushing me – from week one to week 52, we’re going to be great.”

“The first couple of weeks was tough, but overall, I’ve loved it,” Keylan Boone said. “It’s been hard work. I embrace every day of it, every minute. It’s something new, which is good, because I don’t want something that’s easy. It’s a challenge and I embrace it every day.”

The Cowboys open their season Nov. 6 when they host Oral Roberts in GIA.