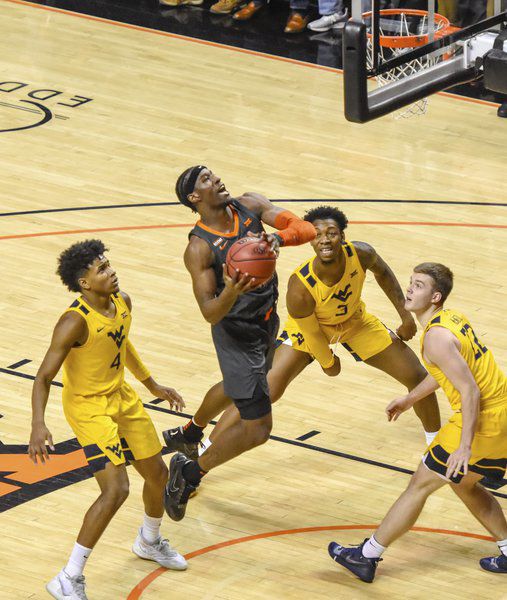 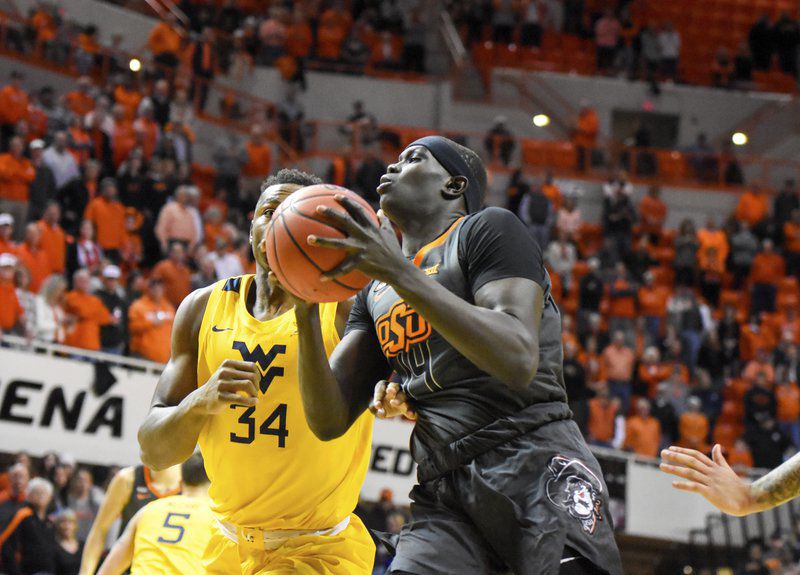 Jason Elmquist/Stillwater News Press Oklahoma State sophomore forward Yor Anei, right, is hoping to find his way out of a recent slump Saturday when the Cowboys play at TCU. Anei has scored three points in the past two games and grabbed only nine rebounds in the past four contests.

Jason Elmquist/Stillwater News Press Oklahoma State sophomore forward Yor Anei, right, is hoping to find his way out of a recent slump Saturday when the Cowboys play at TCU. Anei has scored three points in the past two games and grabbed only nine rebounds in the past four contests.

Through two games of the Big 12 Conference slate, Oklahoma State and TCU are headed in opposite directions entering Saturday’s contest in Fort Worth, Texas.

TCU has won both of its conference games by two points apiece. The Horned Frogs (11-3, 2-0) needed overtime to defeat Iowa State, 81-79, at home last Saturday before edging out Kansas State, 59-57, in Manhattan, Kansas, on Tuesday night.

“Really good and obviously playing with a lot of confidence,” third-year OSU coach Mike Boynton said. “They won on the road in a tough place to play in Manhattan. It obviously starts with Desmond Bane – one of the elite players in our conference, and they have an inside presence in Kevin Samuel who shoots 70 percent, which means he’s shooting a lot of of dunks. They’re the best 3-point shooting team in the conference right now and that’s a big challenge for us.”

Meanwhile, OSU lost both of its games by double digits. The Cowboys (9-5, 0-2) were blown out at Texas Tech – now ranked No. 22 in the country – a week ago before dropping a home game to No. 17 West Virginia on Monday night.

Yet, on Thursday afternoon, Boynton remained optimistic about his team, whose five losses have come during the past seven contests, heading into Saturday’s contest in which the Cowboys hope to avoid leaving still winless in Big 12 action.

“We’ve had two days of really good, spirited, positive practices,” Boynton said. “I think our guys are in a good frame of mind. Do we like that we’re 0-2? Nope, but at the same time, they understand it’s a long season and there are a lot more opportunities for us, and we played two of the more elite teams in the country. I think both of those teams will be in the top 10 or 20 for the rest of the season.”

Monday’s loss was highlighted by the Cowboys’ poor 3-point shooting. They made 1 of 20 from long range with senior Lindy Waters making the only 3 late in the game.

Oddly enough, it was the same stat line posted by Ole Miss when it lost to OSU earlier this season. Boynton addressed it following Monday’s loss.

“I think Ole Miss shot the same thing against us when we played them,” Boynton said. “I was hoping I’d never have to feel the way Coach (Kermit) Davis felt after that, but I know exactly what it feels like now.

“I really thought shooting would be a strength of this team coming into the year with the personnel we had and the history of the guys. It just hasn’t played out that way for whatever reason. It’s our job to figure out a way to get a better rhythm. It’s concerning we haven’t shot it well consistently all year, other than Lindy and Thomas.”

For the season, the Cowboys have made 29.6 percent of their 3-pointers. They shot at or above that mark during the three games before Monday, but have yet to shoot above 40 percent with the exception of a 19-point win at College of Charleston in mid-November.

Boynton was asked Monday night about how to fix shooting woes, and he said it starts with practice.

“Confidence comes from work,” Boynton said. “What we have to figure out is are we working hard enough to feel confident we’re going to make them in a game? That was our message to our team. I thought we got good looks, but I don’t know if the guys were shooting it with the level of confidence that they know they’ve really been working at it. It’s one of the reasons I feel good about what we can become, because I have no doubt every day I bring everything I have, and eventually I believe work wins.”

Meanwhile, TCU leads the conference in 3-pointers made and attempted, with the best percentage, too. TCU has made 37.1 percent of its long-range shots – making no fewer than five in a game, and at least 10 in each of the past three contests.

TCU senior Desmond Bane ranks second in the Big 12 in 3-point percentage and average 3-pointers made per game. He enters Saturday averaging 16.9 points per contest.

OSU senior guard Thomas Dziagwa is tied for fifth at 2.5 made shots behind the arc per game this year. His long-range shooting was missed Monday, but he returned to practice Wednesday.

“I don’t know if he’s 100 percent, but he’s obviously able to practice,” Boynton said. “If all goes well and he practices tomorrow, he’ll be available Saturday.”

Boynton added that Dziagwa’s shooting was missed last game, but he wasn’t sure how much it would have helped in a 14-point loss.

Another Cowboy who Boynton hopes to see a return from is sophomore forward Yor Anei. He’s played every game, but his production has plummeted the past two outings.

Anei is averaging 9.7 points per game, but scored three points two games ago before being held scoreless Monday. Those came after games where he scored two and 10 points, respectively.

His rebound numbers have also dipped. Anei has grabbed just nine rebounds combined the past four games. He was averaging 6.3 boards per game before the past four contests.

“He’s got to own his part in it,” Boynton said Monday night. “They obviously multiple, big bodies to throw at him and that’s part of the reason I started Jonathan – to kind of bring a bigger, more physical presence to the rebounding aspect – and I thought that was a little effective, but didn’t help us make any shots.

“But as far as Yor is concerned, he just has to get back to playing free and confident. He seems like a guy who’s feeling pressure, and our job is to make sure he understands what he brings to our team is really important and we need him to play his best.”

OSU and TCU split last year’s regular season contests, with the home team winning each time. TCU won last year’s game in Fort Worth when J.D. Miller drove the length of the court and hit a fade-away buzzer beater seconds after Dziagwa tied the game on a contested 3-pointer.

The Cowboys won 68-61 in Stillwater just 12 days later. However, TCU knocked the Cowboys out of the Big 12 Tournament with a 73-70 victory, effectively ending their season.