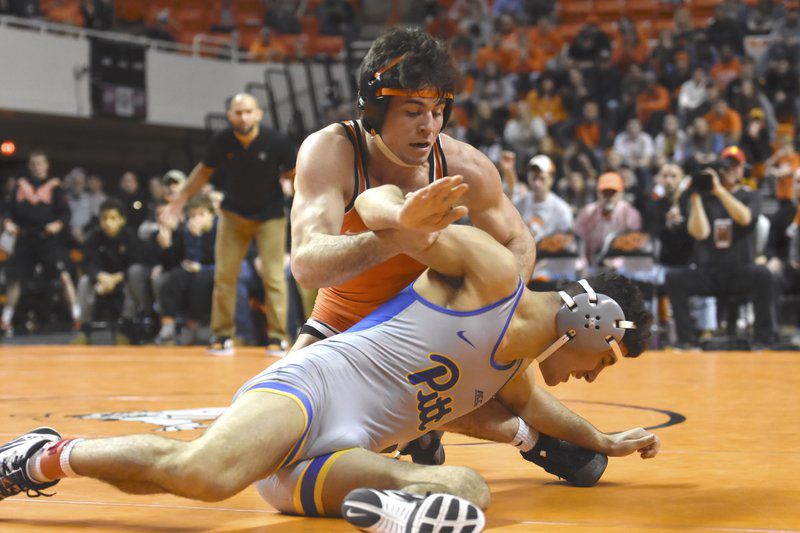 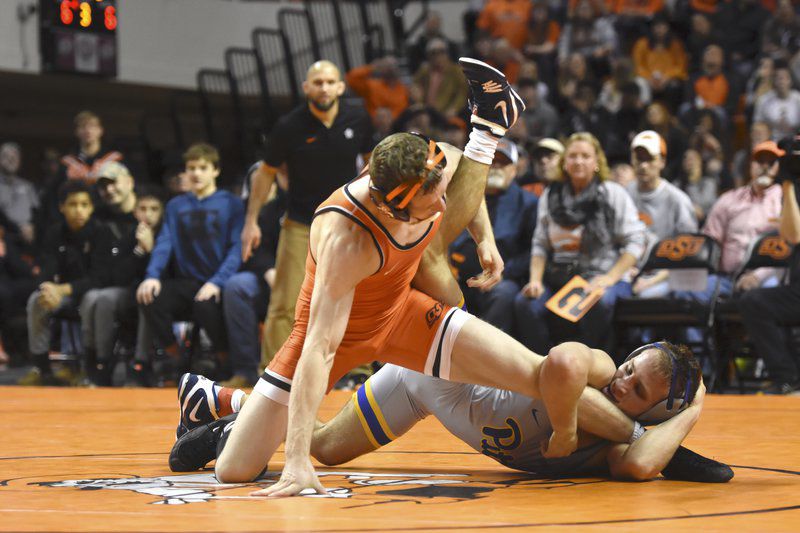 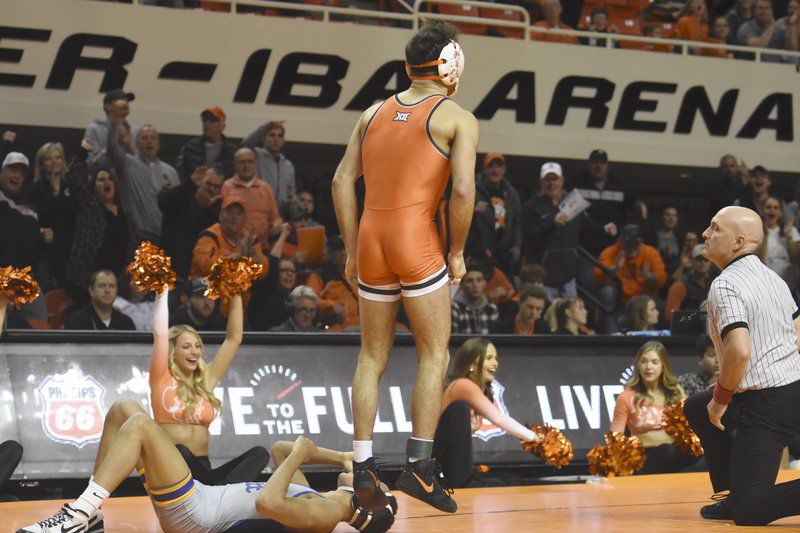 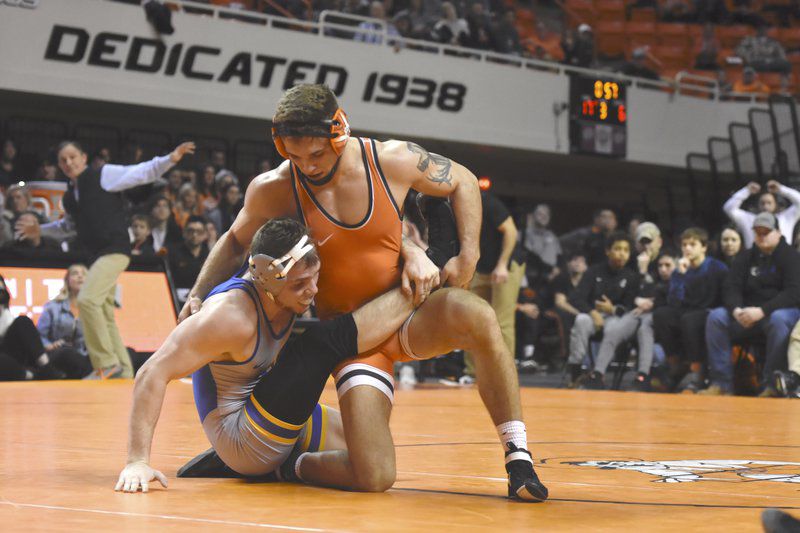 It was billed to be much closer between No. 9-ranked Oklahoma State and No. 10 Pittsburgh.

But when the dust cleared in Gallagher-Iba Arena on Saturday night, the Cowboys had rode through the Panthers for a 30-10 victory – losing just two matches on the night, both of which were to top-10 wrestlers for Pitt.

“That’s what dual meet teams do, they pass the baton to the next guy with a, ‘Hey, we’re on a roll here. Throw out rankings, let’s go win matches,’” Oklahoma State wrestling coach John Smith said.

Part of the reason for the lopsided victory was a pair of upsets by the Cowboys.

A night after getting his first fall in Gallagher-Iba Arena, Anthony Montalvo served notice to country’s wrestlers at 184 pounds.

The California nearly pinned No. 7-ranked Nino Bonaccorsi in the first period with a takedown and a two-point nearfall near the edge of the match, but the Pitt wrestler got back into the match by the end of the frame with a takedown – and a point awarded for illegal hands to the face by Montalvo.

The remainder of the match would be all Montalvo, though.

After a quick escape in the second period to give him a one-point advantage, Montalvo rode Bonaccorsi for the full two minutes in the third to deliver a 6-4 upset of the top-10 wrestler.

“I know I could do that, it’s just a matter of going out and doing it,” Montalvo said. “I wrestle Dakota Geer every day, and that’s close to the same style. That was a match I knew I could win, and I wanted to win in front of the home crowd.”

His upset came on the heals of a top-20 upset by Andrew Shomers at 174 pounds.

With uncertainty each dual of whether he or Joe Smith will get the start – with both loosening up behind the bleachers a few matches prior to 174 – Shomers shined under the pressure.

Going up against the No. 17-ranked Gregg Harvey, the Oklahoma State redshirt senior, who wrestled at 157 last year, didn’t shy away. He attacked the ranked wrestler from the onset, getting a takedown and a four-point nearfall late in the first frame. He scored another takedown in the third – after Harvey elected to start neutral – and rode out the period to get a 10-0 major decision.

“He was tough, and he was physical,” the Cowboy coach said of Shomers. “He got in on a leg a few times and had hard finishes. … Definitely a match you go, ‘Wow!’

“It’s good that we are in position to use Shomers at a time when we really need him.”

Oklahoma State had taken care of business earlier in the dual, avoiding any upsets of its own.

Redshirt senior Nick Piccininni, the No. 4-ranked wrestler at 125 pounds, fought back from two early takedowns to get a pin in the second period for his 100th career win as a Cowboy – making him the 44th wrestler in Oklahoma State history to achieve the mark.

The Cowboys nearly got an upset at 133 pounds with freshman Reece Witcraft getting a takedown and nearfall near the edge of the mat against sixth-ranked Micky Phillippi. But a scramble in the second period – with Witcraft holding a 7-0 advantage – led to Phillippi getting a pin of the Broken Arrow native.

Dusty Hone got Oklahoma State back on track with a 7-1 decision over Cole Matthews at 141 pounds, before No. 3-ranked Boo Lewallen earned a 20-4 technical fall at 149 pounds.

That set up what would have a been a swing match with the Cowboys clinging to just an eight-point advantage in the team score going into a match at 157 pounds in which neither wrestler was ranked.

Wyatt Sheets had faced Pittsburgh’s Taleb Rahmani in the Southern Scuffle, getting a four-point decision in their first meeting. But the second meeting was a little tighter, with Sheets needing a late takedown – and just enough in riding time – to win by 9-8 decision.

In the only ranked matchup of the night, ninth-ranked Travis Wittlake also faced a familiar Pitt wrestler from the Scuffle. But just like last time, Wittlake controlled the match against No. 11 Jake Wentzel and won by 9-2 decision.

“At 57 and 65, I think we took some leads and kind of sat on them a little bit,” Smith said. “But both those guys have had battles with those two opponents in the past, and they had been tight and close. Sometimes, you just think that’s what’s supposed to happen, instead of maybe changing something – like separating the scores.”

The only other match Oklahoma State could have faced an upset was at 197 pounds, and it did come with an early scare.

No. 10-ranked Dakota Geer gave up an early takedown to Kellan Stout, who has a losing record on the year, but Geer rallied with a takedown in the second and collected a riding time bonus to win by 6-2 decision.

The Cowboys closed out the night with heavyweight Austin Harris – who had a clear weight disadvantage against No. 8 Demetrius Thomas – avoiding a second-period pin before eventually losing by 14-3 major decision.

Oklahoma State will try to carry over the two lopsided wins this weekend over teams from the East Coast into corn country next weekend with a back-to-back duals at Northern Iowa on Saturday and Iowa State on Sunday. Both matches will be streamed on FloWrestling.