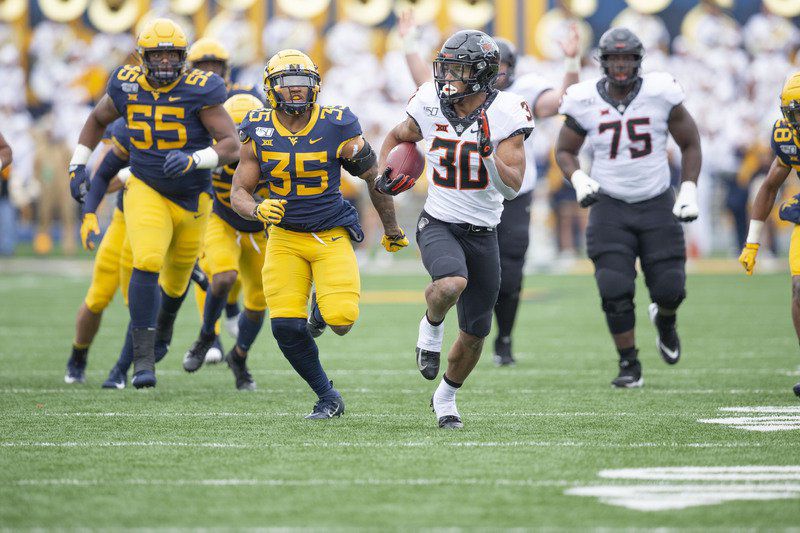 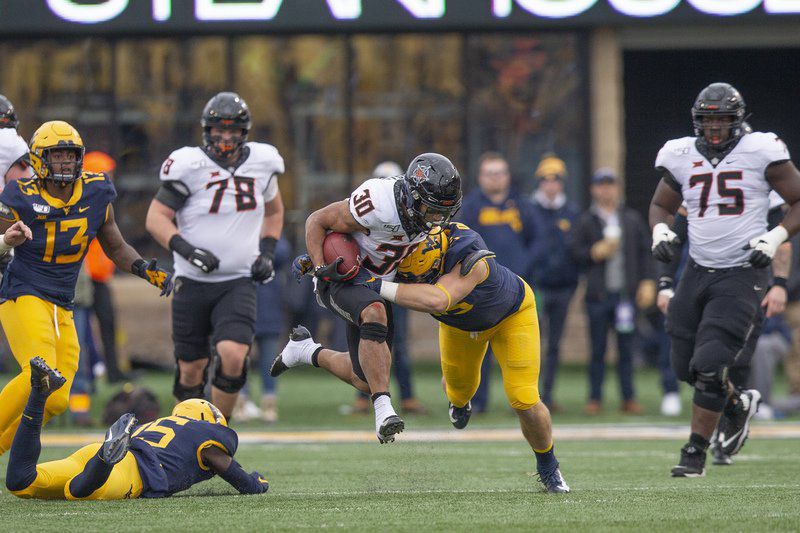 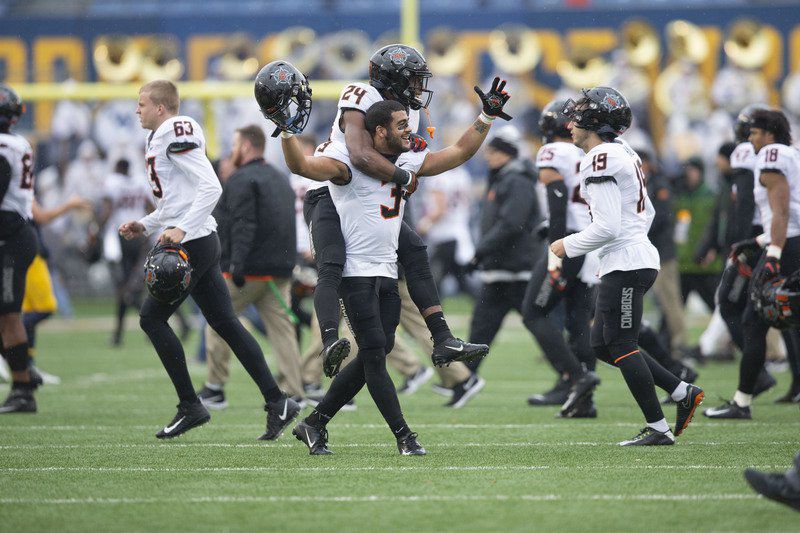 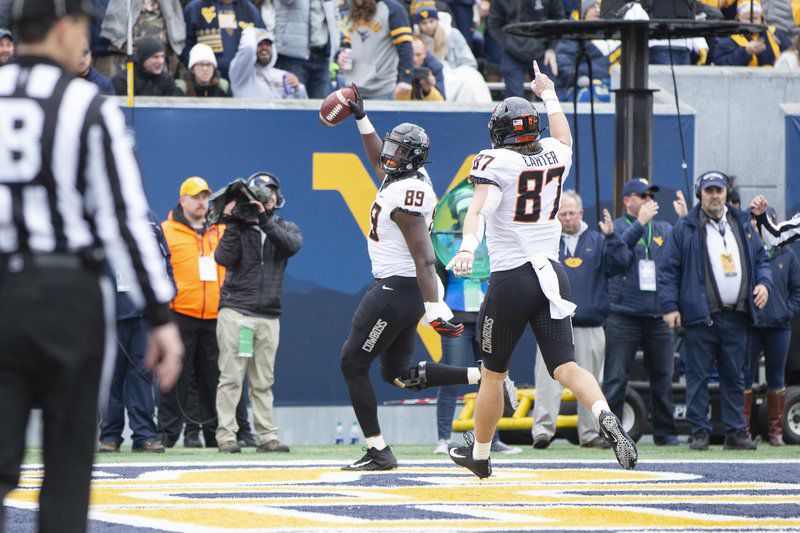 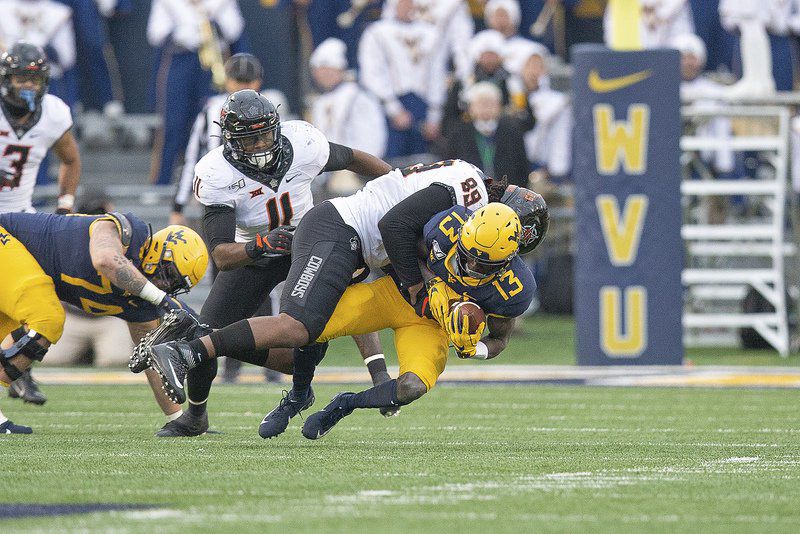 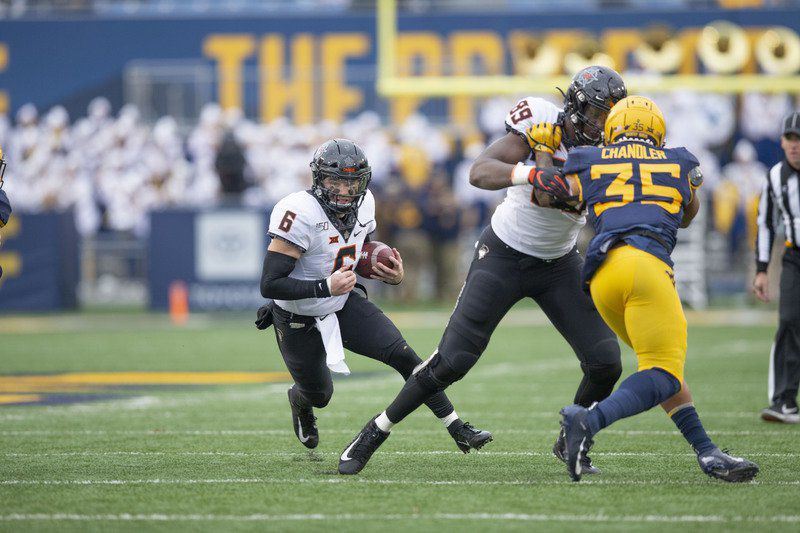 Bruce Waterfield/OSU Athletics Oklahoma State quarterback Dru Brown, who started in place of an injured Spencer Sanders, runs behind Cowboy Back Jelani Woods for a gain during Saturday's game against West Virginia. 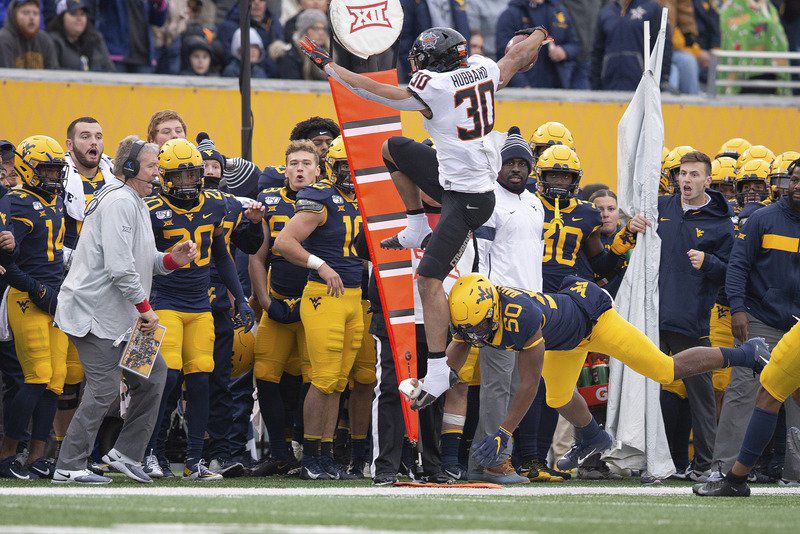 Bruce Waterfield/OSU Athletics Oklahoma State running back Chuba Hubbard leaps over a West Virginia defender to pick up the first down on a third-and-7 during Saturday's game in Morgantown, West Virginia. 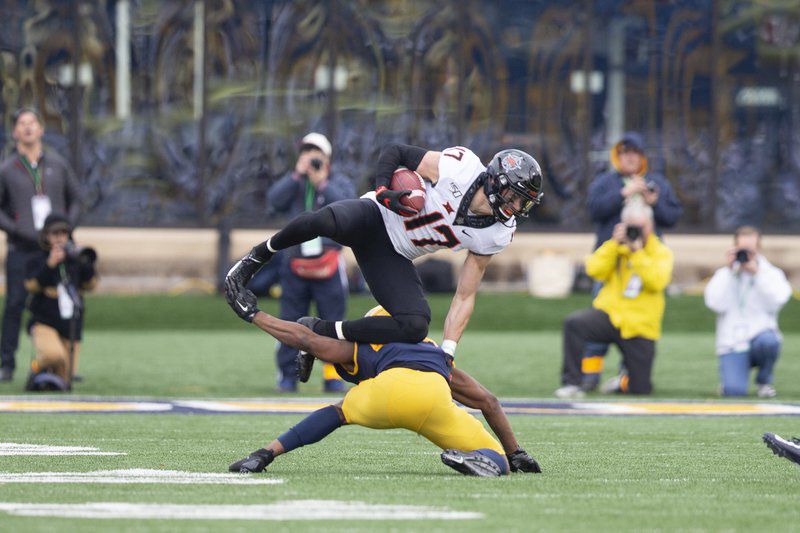 Bruce Waterfield/OSU Athletics Oklahoma State quarterback Dru Brown, who started in place of an injured Spencer Sanders, runs behind Cowboy Back Jelani Woods for a gain during Saturday's game against West Virginia.

Bruce Waterfield/OSU Athletics Oklahoma State running back Chuba Hubbard leaps over a West Virginia defender to pick up the first down on a third-and-7 during Saturday's game in Morgantown, West Virginia.

With starting quarterback Spencer Sanders sidelined with an injury, Oklahoma State leaned on its Heisman hopeful running back Chuba Hubbard to escape Morgantown, West Virginia, with a win Saturday.

Hubbard accounted for 68% of OSU’s offensive production, with the Cowboys utilizing him both in the run and pass game.

OSU’s offense went through the redshirt sophomore tailback on 56% of the total plays, with Hubbard rushing the ball 26 times for 106 yards while hauling in seven passes for 88 yards in OSU’s 20-13 road win.

Gundy had talked earlier in the week about how OSU should utilize Hubbard more in the passing game after he had caught two passes for 42 yards in the Kansas game.

And with West Virginia loading up the box, and its secondary keeping the Cowboy wide receiver corps in check for most of the game, that decision to prove important.

“It forced us into throwing the ball to him some, more so than him running,” Gundy said. “It worked out good for us.”

The very first play OSU called up a screen to Hubbard – coming midway through its first drive of the game – turned into a 46-yard catch and run to put OSU down at the West Virginia 6-yard line. Four plays later, with Gundy electing to go for it on fourth-and-goal at the 1, Dru Brown – making his first start at quarterback for the Cowboys – connected with a wide-open Jelani Woods on a play action.

But the Mountaineers defense became more aware of Hubbard’s usage in the passing game after that first screen – sniffing out several other attempts to get him the ball in space in the first half.

Because of WVU’s defense limiting OSU’s momentum in the first half, and the Mountaineers offense putting together a couple of lengthy, time-consuming scoring drives, the Cowboys managed to have just five possessions in the opening 30 minutes.

It was the fewest drives OSU has had in the first half of a game this year – and in five games the Cowboys had five drives in the opening quarter alone. And with that, OSU headed into halftime trailing 10-7.

Coming out of the break, the OSU focused in on Hubbard yet again, with the Edmonton, Alberta, Canada, native, touching the ball on four plays, including a 15-yard pass to put the Pokes on the doorstep of the red zone. However, Hubbard took a shot to he left thigh on the play and limped off the field for a few plays and the drive stalled out with OSU getting a 44-yard field goal from Matt Ammendola.

While OSU’s next offensive possession saw Brown hook up with Hubbard for a pair of passes for a total of 20 yards, it stalled out near midfield when Hubbard was stuffed at the line on a third-and-1 play.

But the Cowboy tailback’s biggest play of the second half was still to come.

Following the Mountaineers putting together a scoring drive that resulted in a field goal to take a 13-10 lead into the fourth quarter, OSU was looking to reclaim the momentum and shifted away from Hubbard and focused more on getting Brown and his receivers going to open the final quarter.

The Hawaii transfer completed 6 of 7 pass attempts for 45 yards, capped with a 2-yard touchdown pass to Dillon Stoner to put the Pokes up 17-13.

The OSU defense followed suite with fourth three-and-out of the game to give the ball back to the offense to try to increase the lead.

And that’s when the Cowboys went back to the well of Hubbard once again.

Facing a potential three-and-out itself, OSU got the ball into the hands of Hubbard in the flat and he took it up the sideline before hurdling over a pair of West Virginia defenders on his way out of bounds to pick up the first down and keep the drive alive.

The offense would get a couple of first-down plays – a 15-yard pass from Brown to Stoner, and 11-yard run by Hubbard – to get OSU into the red zone, where a 22-yard field goal from Ammendola at least made it a seven-point game with six minutes remaining.

“I just try my best to get first downs and score,” Hubbard said. “I was just trying to do my job and make something happen.”

But OSU wasn’t out of the woods of the Appalachian Mountains just yet.

The Mountaineers’ offense put together one last gasp, marching down into the red zone with the hopes of tying – or potentially winning it.

However, with OSU backed up to its own goal line, the defense – which had flashes all game, including a pair of goal line stands by Amen Ogbongbemiga early in the game – bowed up and sent WVU backwards on the final four plays.

West Virginia went with four straight passes, with the only one being completed going for a 2-yard loss to running back Kennedy McKoy – with Ogbongbemiga in on the tackle. And on the final play of the drive, with WVU facing a fourth-and-12, second-year defensive coordinator Jim Knowles dialed up an all-out blitz, sending nearly everybody but the cornerbacks and quarterback Jarret Doege had to get rid of it so quick that it landed harmlessly in the middle of the field with no receivers around.

With the win, OSU improved to 8-3 on the season and heads into Bedlam with a chance of getting another 10-win season in the Gundy era if the Cowboys can beat Oklahoma for just the fifth time this century. That kickoff is set for 7 p.m., and will be televised on FOX.