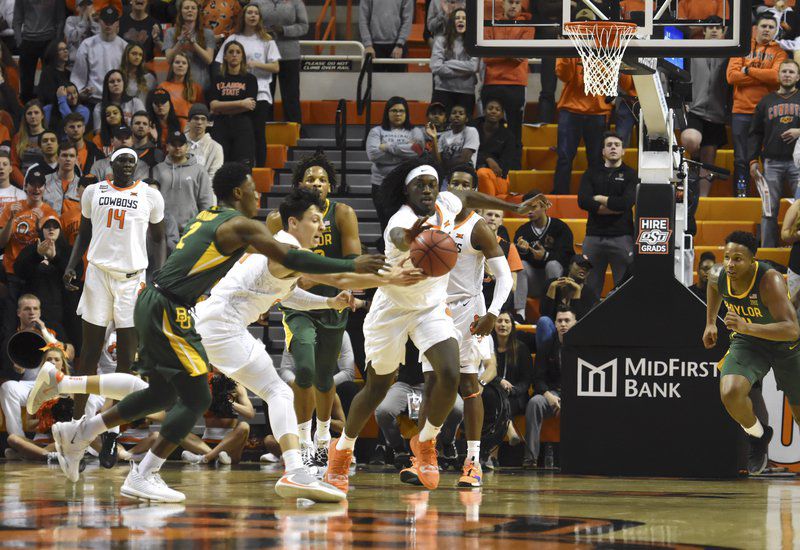 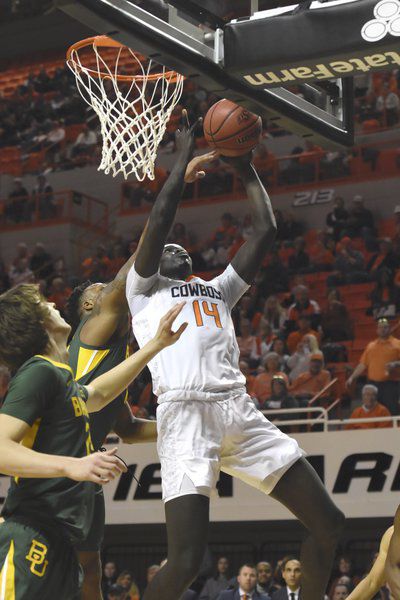 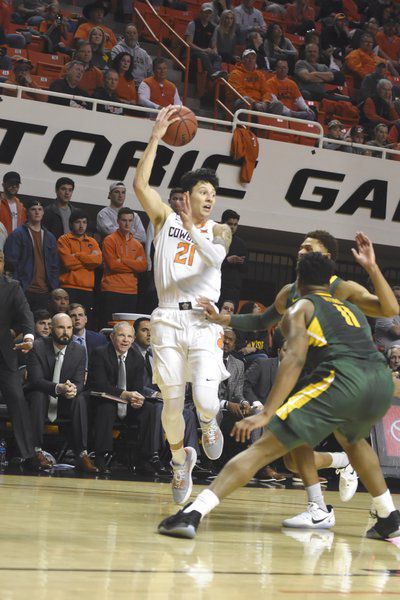 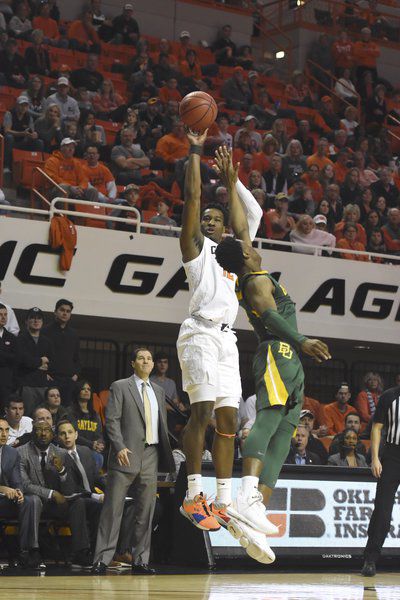 Jimmy Gillispie/Stillwater News Press Oklahoma State senior Cameron McGriff (12) attempts one of his five 3-pointers during the first half of Saturday's game in Gallagher-Iba Arena. McGriff made four of those five en route to 14 points in the half.

Jimmy Gillispie/Stillwater News Press Oklahoma State senior Cameron McGriff (12) attempts one of his five 3-pointers during the first half of Saturday's game in Gallagher-Iba Arena. McGriff made four of those five en route to 14 points in the half.

Mike Boynton’s squad arguably played the best its played since December, but even that wasn’t enough to leave Gallagher-Iba Arena with a win Saturday afternoon.

His Oklahoma State men’s basketball team gave second-ranked Baylor a fight all the way to the final seconds, but fell short of becoming the next team to upset a highly-ranked opponent this season. The Cowboys remain winless in the calendar year following the 75-68 loss to No. 2 Baylor, which remains unbeaten in Big 12 Conference action.

“Our kids did exactly what we asked them to do for 40 minutes today and put ourselves in a position to get a win over, again, the team I think is playing the best in the country,” Boynton said. “The team I picked to win the Big 12. They answered, which is what good teams do, and they made some key plays late to give themselves an opportunity to get another road win. Where two weeks ago, when we started league play, we weren’t playing very good basketball. Two weeks later we’re on the verge of getting this thing right where we need it to be, so we can build on the progression that has been made so far.”

The Cowboys led the Bears (15-1 overall, 5-0 Big 12) for more than 30 minutes in the contest, but found themselves down by one possession late in the contest. A five-point deficit was cut to two on a deep 3-pointer by OSU senior Lindy Waters with 1 minute, 21 seconds left in the game.

After a pair of Baylor free throws and a layup by OSU sophomore Isaac Likekele, the Cowboys (9-8, 0-5) were forced to foul with 19 seconds remaining. Baylor’s Jared Butler, who tied for the game-high with teammate Freddie Gillespie with 17 points, sunk the first foul shot, but missed the second.

OSU sophomore Yor Anei, who bounced out of an offensive slump – seven combined points in the past four games – with eight points Saturday, grabbed the defensive rebound and tried to pass it to Likekele. However, his pass through traffic was intercepted by the Bears.

Likekele quickly fouled Devonte Bandoo, who made both free throws, essentially sealing the win for the visiting squad. A few seconds later, the Cowboys failed to score and Baylor left Stillwater with a tough, road win.

"I think first and foremost, we stayed together,” Baylor coach Scott Drew said. “When you get down like that, you get finger pointing and you get people blaming each other. That's never the way to solve the issue. Everybody stayed, supported each other; really stayed together. Then, when we made some changes in what we were going to do defensively, everybody was locked in and reinforcing things. You knew their minds were in the right spot. That's what you want from a team with some veterans on it, you want that leadership from them.

Immediately after Anei’s lone turnover and Likekele’s foul, OSU senior Cameron McGriff, who led the Cowboys with 16 points along with Likekele, walked over to Anei to console him with words of encouragement.

“That’s just love amongst each other,” McGriff said. “That’s what we call it. When someone is down on themselves a lot and wants to be a great player, and that’s what we love about him every day, but we also know he has to stay in great spirits, because we love the Yor that’s smiling all of the time. … When we have him in a great mindset and a great state mentally, this team can be even better.”

Likekele also talked to Anei after the miscue. After the game, he shared a similar sentiment as McGriff when it came to their feelings on the play and their teammate.

“If he thought it came down to that play of us losing the game, we told him that’s fools gold really,” Likekele said. “Cameron told him to always keep your composure out there and not let people see you like that. That was big time, especially coming from one of our senior captains, because it would have been easy to get mad at Yor or focus on that play or the turnover, but Cam didn’t mention anything about him throwing the ball away.”

Likekele, who also led OSU with nine rebounds, and Waters scored double figures in the second half to help keep the Cowboys in the game as Baylor erased a 12-point deficit during the middle of the half.

A 12-2 run by the Bears – aided by a pair of 3-pointers from MaCio Teague and Butler – gave them a five-point advantage with 6:48 left in game. Baylor made 6 of 11 from long range in the second half after sinking only 2 of 12 in the first 20 minutes.

It was nearly the opposite for the Cowboys. They made 8 of 14 in the first half – led by four from McGriff and three from senior Thomas Dziagwa – before shooting 2 of 10 in the second half.

“We’re just letting it fly and playing free out there,” McGriff said. “I think that’s the best thing about the past two games, I’d say. We’re definitely making a lot of mistakes, but there is nothing left on the floor from an effort standpoint. We can always correct mistakes and be better in the future, for us to have fun with it, which we all want to do, we’ve just got to play free and not think as much.”

The Cowboys will try to end their Big 12 losing skid Tuesday when they travel to Iowa State. The Cyclones (8-9, 1-4) lost 72-52 at Texas Tech on Saturday.