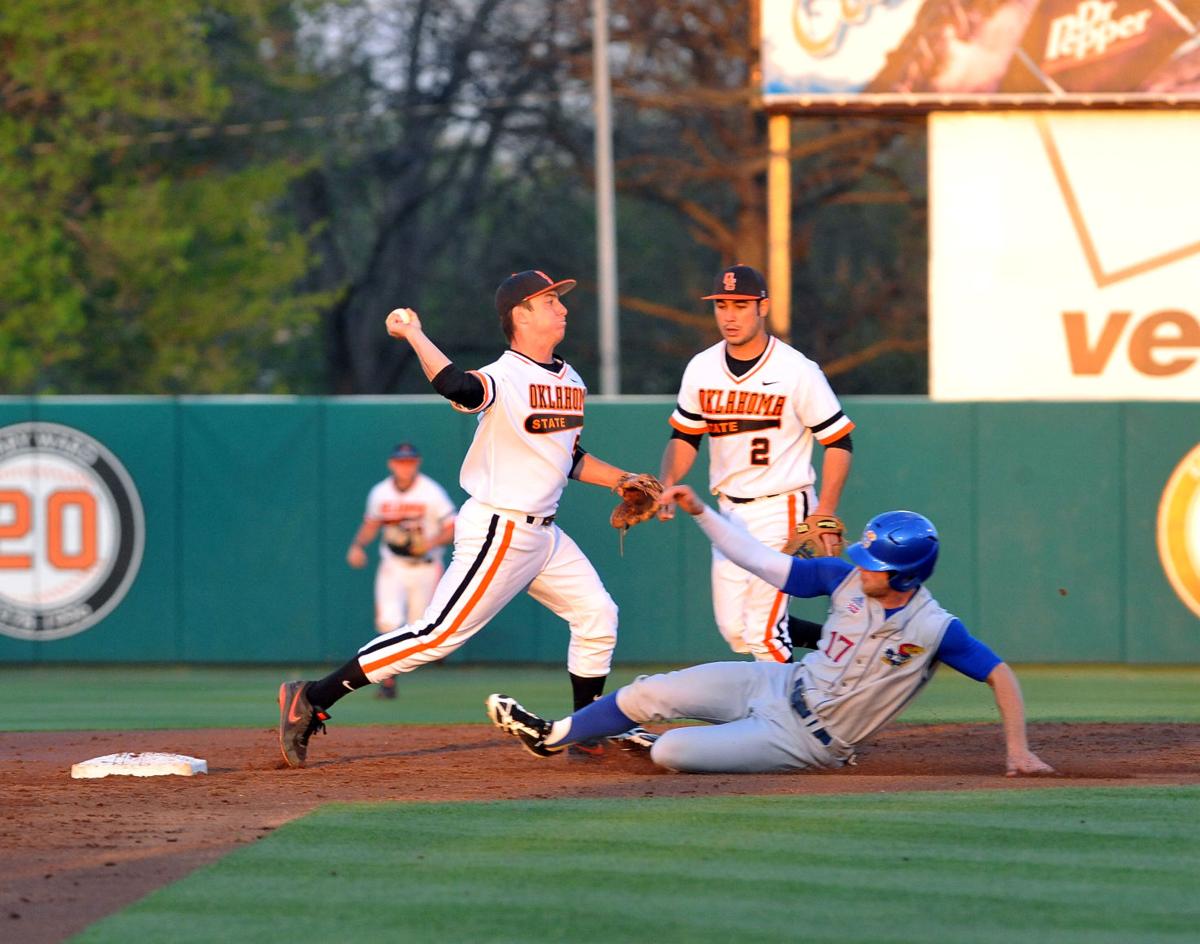 Oklahoma State shortstop Donnie Walton fires to first to complete an inning-ending double play to get the Cowboys out of a bases loaded jam during Friday's Big 12 Conference contest with Kansas. 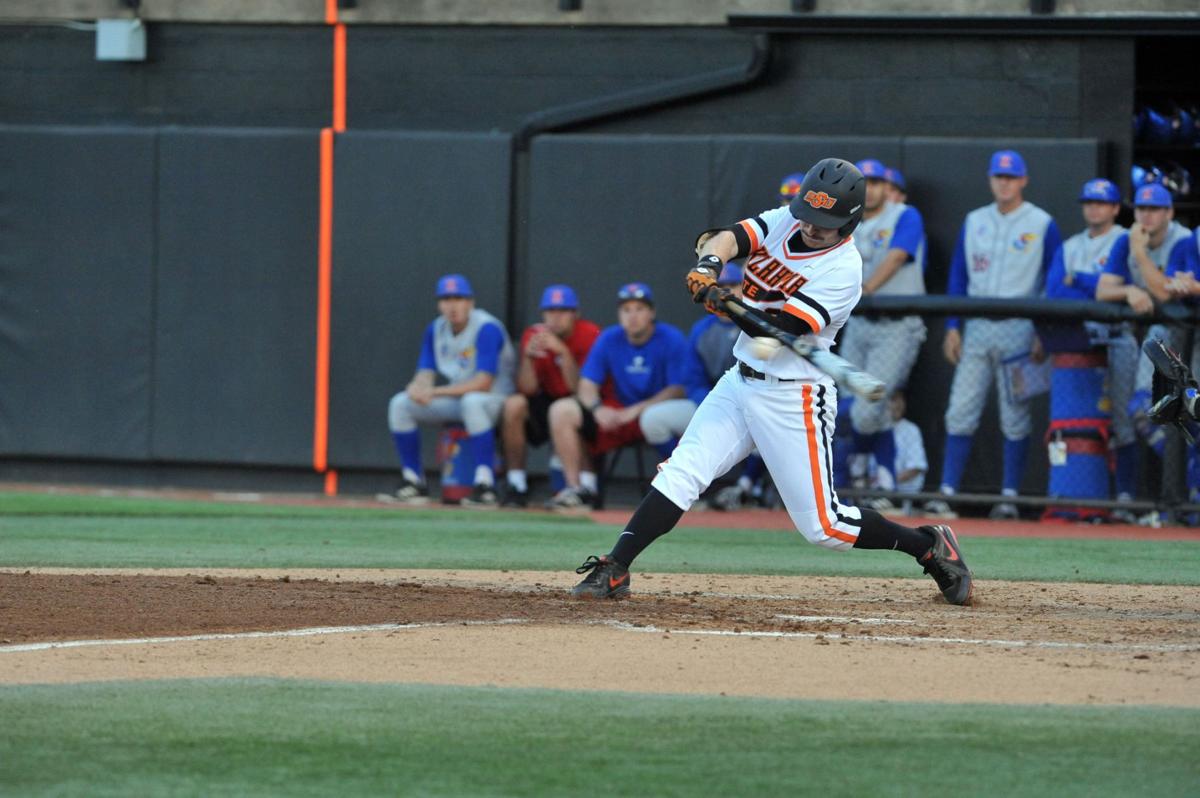 Oklahoma State shortstop Donnie Walton fires to first to complete an inning-ending double play to get the Cowboys out of a bases loaded jam during Friday's Big 12 Conference contest with Kansas.

Jon Perrin tossed the first shutout of his career, and 13th-ranked Oklahoma State used a big seventh inning rally to vault into first place in the Big 12 Conference standings with a 7-0 win over Kansas Friday night at Allie P. Reynolds Stadium.

The win was the fifth in a row in league play for the Cowboys, who improved to 9-4 and moved to a game ahead of both TCU and Texas in the Big 12 standings. OSU is 27-11 overall.

Perrin recorded the first complete game of his career, and the junior right-hander also racked up a career-high nine strikeouts while issuing just one walk along the way. In winning his third-straight start, he improved to 5-2.

“I felt pretty good out there, obviously,”  Perrin said. “I had all three pitches working. I got swings and misses with my fastball, changeup and slider. I wasn’t as sharp as I should have been in the first three innings, and (OSU pitching coach) Rob (Walton) got on to me a little bit about that. He wanted me to be ultra-aggressive and just pound the zone with max effort. I made that adjustment and in (innings) four through nine, I was in attack mode the whole time.”

KU’s offense had most of its success early, collecting five of its six hits in the first three innings. In the third, the Jayhawks got three-straight singles to load the bases with one out, but Perrin got out of the jam by getting Connor McKay to ground into an inning-ending double play.

The Jayhawks only other hit came in the seventh on a two-out by Ryan Pidhaichuk. Perrin then retired seven KU hitters in a row to end the game, getting a groundout to end it on his 130th pitch of the game.

“Jon did a great job. Probably the most encouraging thing is just the way he got stronger as he went and really had a strong demeanor about him,” said OSU head coach Josh Holliday. “The last five innings were about as aggressive and confident as you’ve ever seen him. It’s always fun to watch your players grow and build that confidence in themselves and go out and do that type of thing.”

KU starter Jordan Piche matched Perrin and kept the Cowboys off the scoreboard until the sixth when Tanner Krietemeier followed a single by Donnie Walton with an RBI double into the left-center field gap to put OSU up, 1-0.

OSU put the game away in the seventh. Using a small-ball formula, the Cowboys erupted for six runs on seven singles, with four of those hits coming via bunts.

Tim Arakawa got things started with a bunt single, and Conor Costello followed with a single through the left side. Pinch-hitter Aaron Cornell then laid down a bunt single, and a throwing error by KU catcher Ka’iana Eldredge plated OSU’s second run.

Craig McConaughy and Saulyer Saxon then delivered back-to-back RBI singles, and two batters later, Krietemeier brought home another run with a sacrifice fly to make the score 5-0. The Cowboys then got another set of back-to-back singles these by Gage Green and Zach Fish to push their lead to seven.

“We were very, very good in executing offense in the seventh inning,”  Holliday said. “The kids did a great job of doing the little things it takes to win a game like that on a Friday night and It was pretty amazing. A couple of (the bunts), they knew they were coming, and the kids were still able to execute the skill well enough to be an aggressive play.

Following the big inning, Perrin slammed the door on the visitors to help OSU record its fourth shutout of the season and help give the Cowboys  relievers some much needed rest on the heels of last Tuesday’s 18-inning game against Oklahoma that saw the Pokes use nine pitchers.

“Our bullpen has been getting abused all year so to finally be able to have a night where they get a night off is really huge for our ballclub,” Perrin said. That is just gonna make us better on Saturday and Sunday."