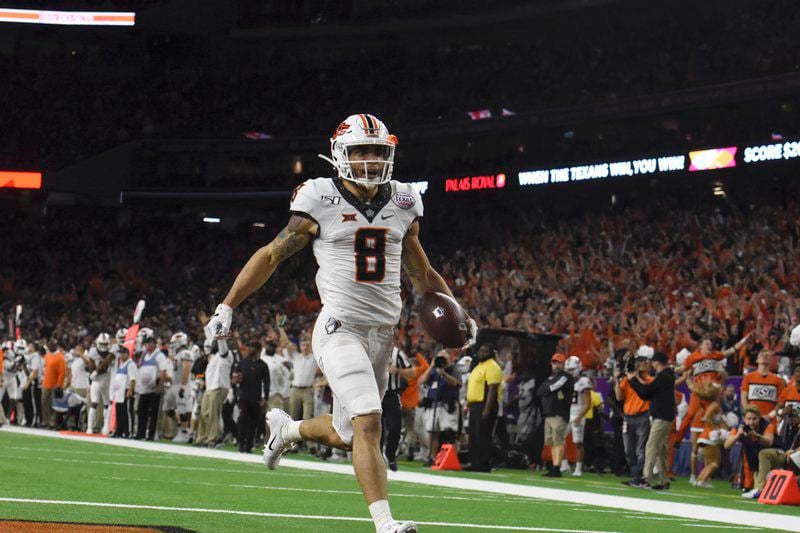 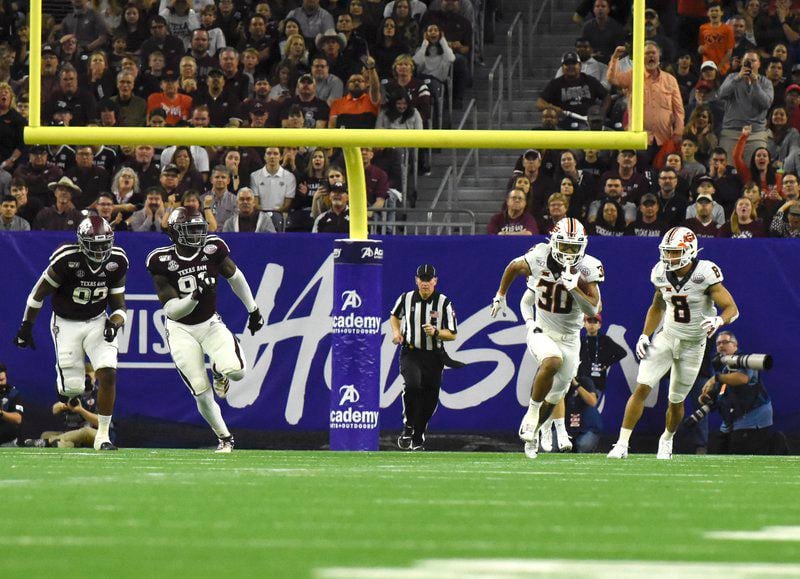 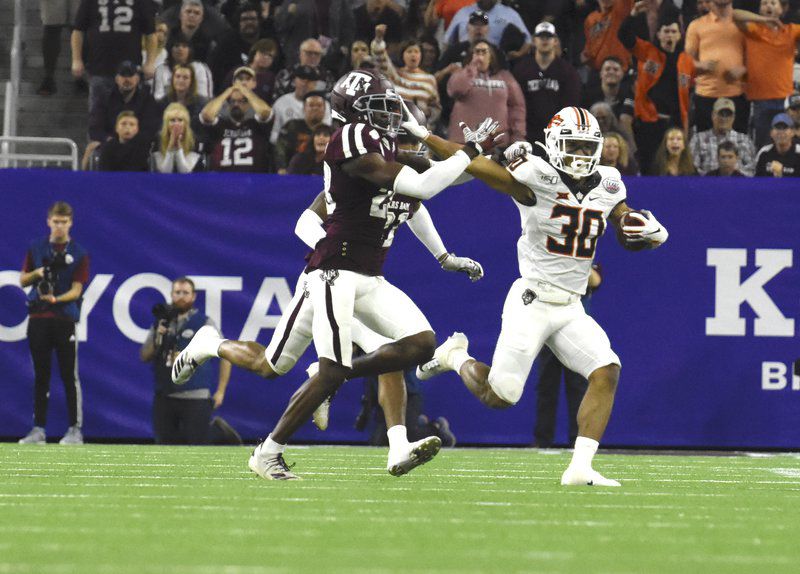 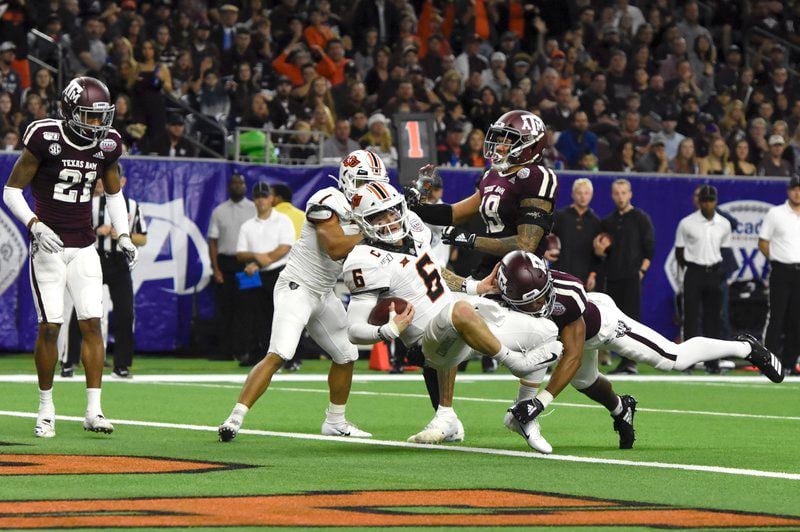 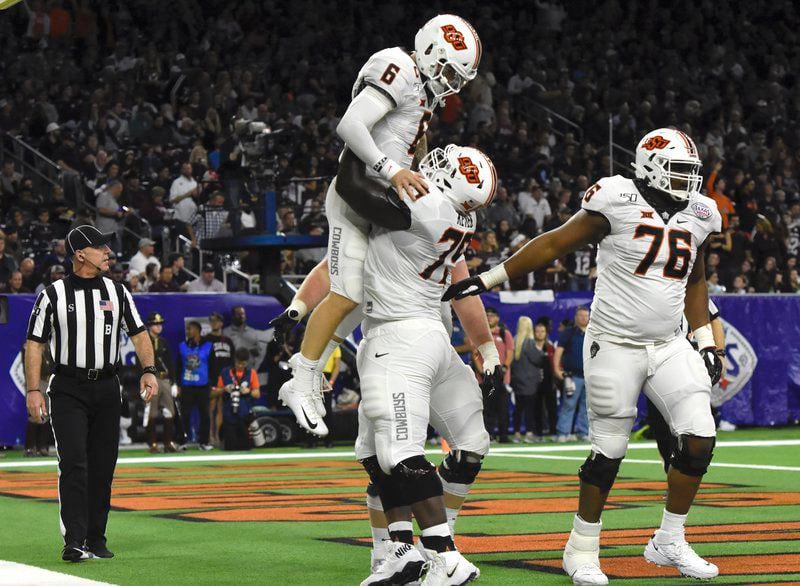 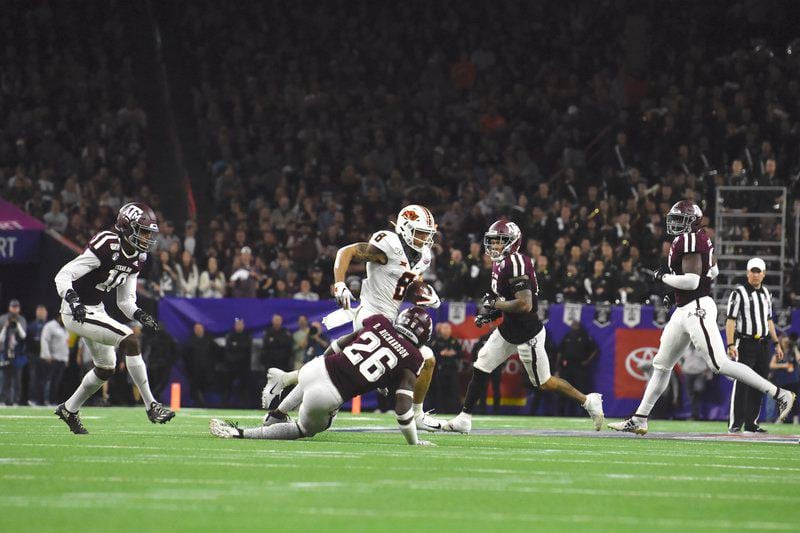 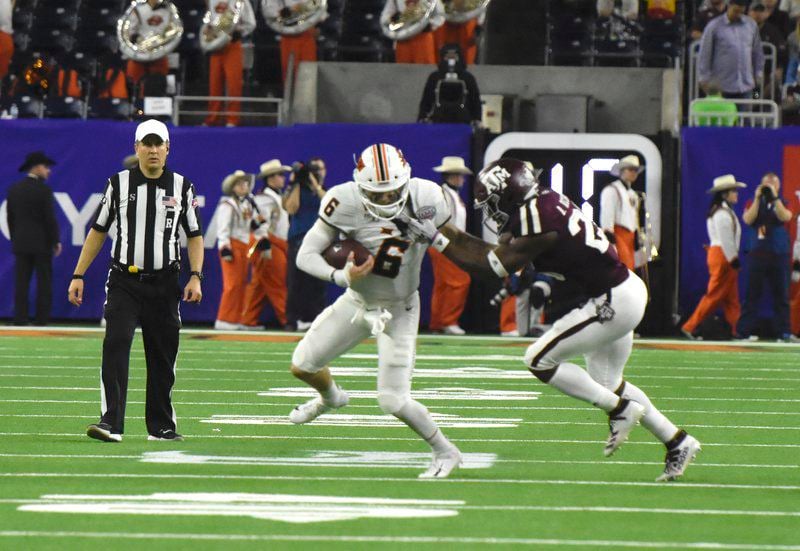 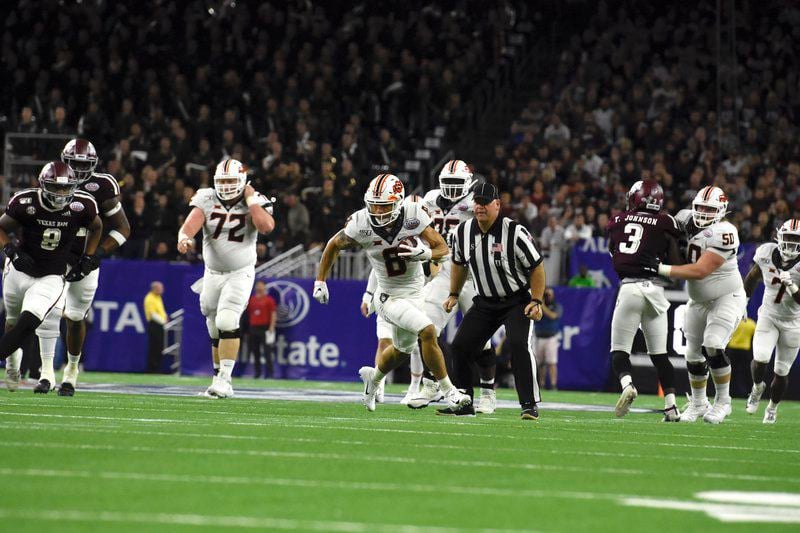 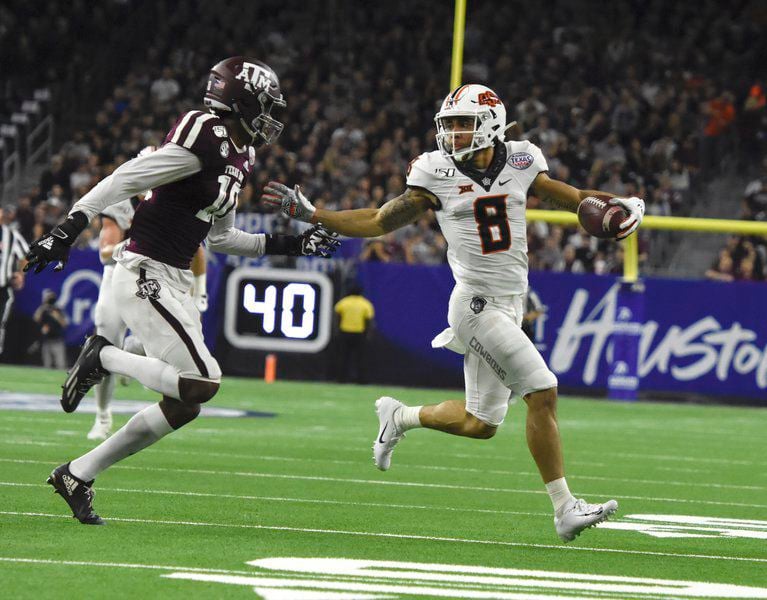 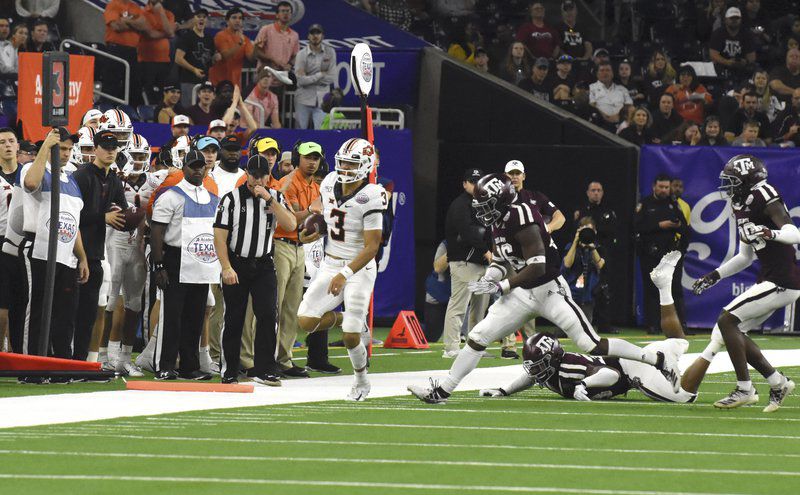 Jimmy Gillispie/Stillwater News Press Oklahoma State redshirt freshman quarterback Spencer Sanders (3) runs for a three-yard gain, picking up a first down on one of his two carries in Friday night’s Texas Bowl in Houston. 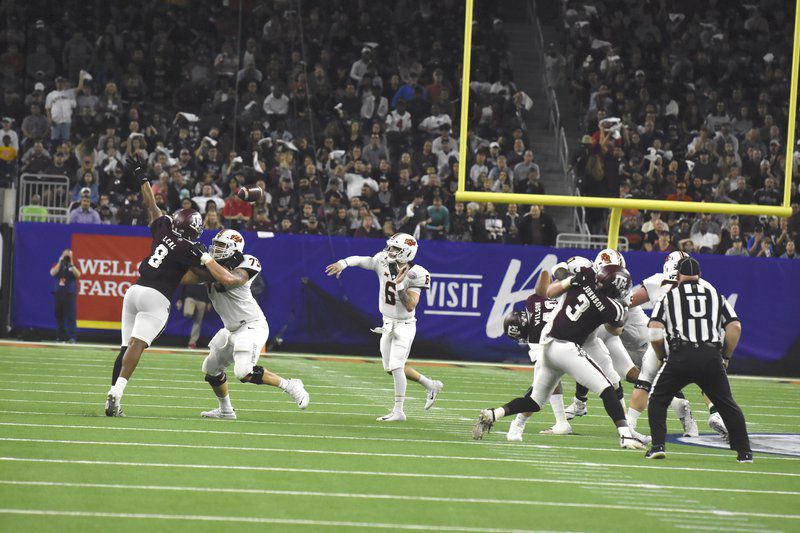 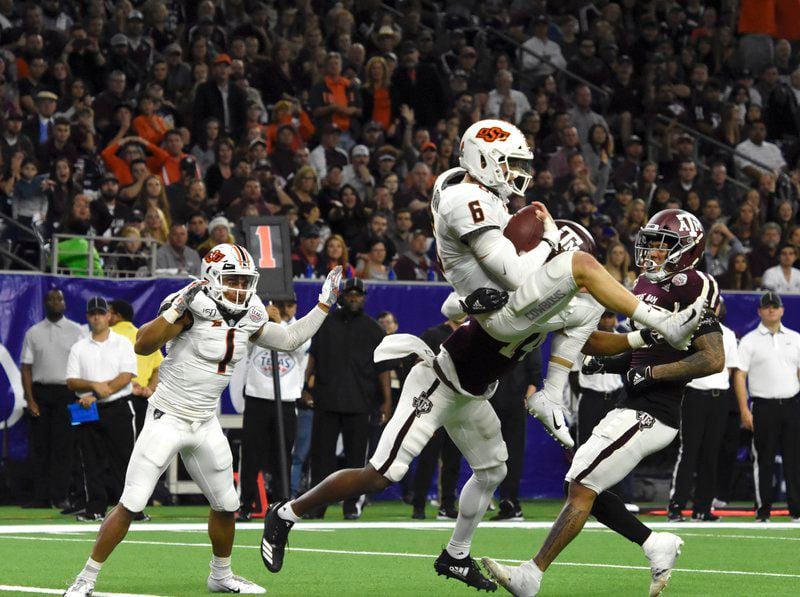 Jimmy Gillispie/Stillwater News Press Oklahoma State redshirt freshman quarterback Spencer Sanders (3) runs for a three-yard gain, picking up a first down on one of his two carries in Friday night’s Texas Bowl in Houston.

HOUSTON – After taking an early two touchdown lead over Texas A&M, Oklahoma State failed to score for the next three quarters Friday night.

Meanwhile the Aggies, which were playing in what was nearly a home game at NRG Stadium, chipped away before taking a double-digit lead themselves.

It was too much for the Cowboys to overcome during the final minutes, as Texas A&M won the Texas Bowl 24-21.

“We had a good game,” OSU coach Mike Gundy said. “Wish we’d have made a couple more plays in the fourth quarter. They started to wear us down a little bit up front on both sides of the ball in the latter part of the game, and we didn’t play very well on special teams. But, I can’t say enough about our team, our senior leadership, guys like Dru (Brown).”

It was Johnson’s second touchdown of the night – doubling his regular season total. He caught five passes for a career-high 124 yards.

“Well, he’s a guy that we might not have known much about if (Tylan Wallace) doesn’t go down,” Gundy said. “He stepped up, made a lot of plays.”

Johnson’s second score gave the OSU faithful a brief moment of hope. However, the ensuing onside kick was recovered by the Aggies. Friday marked the first matchup between the former Big 12 Conference opponents since 2011, but the Aggies (8-5) took the contest.

Early in the game, it looked as if the Cowboys (8-5) were going to run away with the bowl victory. They recovered an Aggies’ fumble at the TAMU 25-yard line on the second play of the game.

Three plays later, and the Cowboys had lost 11 yards. A missed field goal attempt – first of two misses on the night for redshirt senior kicker Matt Ammendola – followed and the game remained scoreless.

OSU did take a 7-0 lead on its next drive, though. A 37-yard run by redshirt sophomore Chuba Hubbard helped OSU escape from inside its own 10-yard line. The drive was capped with a 42-yard pass from Brown to Johnson.

Hubbard finished the night with 19 carries for 158 yards. He surpassed the 2,000-yard mark, becoming the first Cowboy to do so since Barry Sanders in 1988.

“He kind of amazes you,” OSU offensive coordinator Sean Gleeson said. “… We had talked all week coming up to this game where I thought he needed to make some people miss catching the ball out of the backfield, and he just shows me that he can do that, too. I think he’s got everything that you want and we’re happy he’s gotten them here.”

The Cowboys took a 14-0 lead on their next drive after the Johnson TD. They drove 82 yards in four plays – aided by a 57-yard throw to Johnson.

Brown scored the touchdown to put OSU up by two scores. He scrambled in from nine yards out, leaping into the air and taking a hit as he dove into the end zone – shades of an infamous play by Hall of Fame quarterback John Elway more than two decades ago.

In his final college game, Brown completed 15 of 28 passes for 184 yards and two touchdowns. He was also sacked four times for a loss of 37 yards.

“Dru did all of his homework, did all his work, got all his practices, and as I said, Dru played good,” Gundy said. “We didn’t do a good job of protecting him and we got worn down a little bit, but Dru played a good football game.”

TAMU quarterback Kellen Mond wasn’t as effective through the air, completing 13 of 19 passes for just 95 yards. However, Mond did throw the game-tying touchdown in the third quarter.

Mond’s biggest play came nearly a quarter later. He kept the ball on an option and ran for 67 yards to paydirt.

Mond finished with 12 carries for 117 yards. His ability to run the option in the second half led to the win. The junior quarterback was named MVP of the game.

Although the Aggies waited until the second half to run the quarterback option, OSU defensive coordinator Jim Knowles knew it was something the Cowboys had to prepared for entering the game.

“We knew they had it,” Knowles said. “I certainly knew from my time going against (TAMU coach Jimbo Fisher) when I was at Duke, knew that it was a big part of their game when they had EJ Manuel at Florida State. I was concerned about it, but we obviously didn’t spend enough time on it. They pulled it out and we adjusted, but not fast enough.”

Sorry, there are no recent results for popular articles.