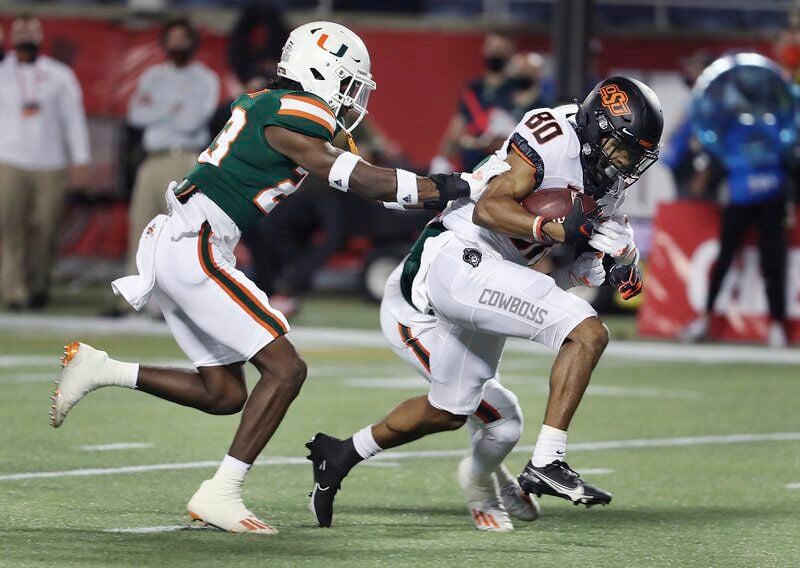 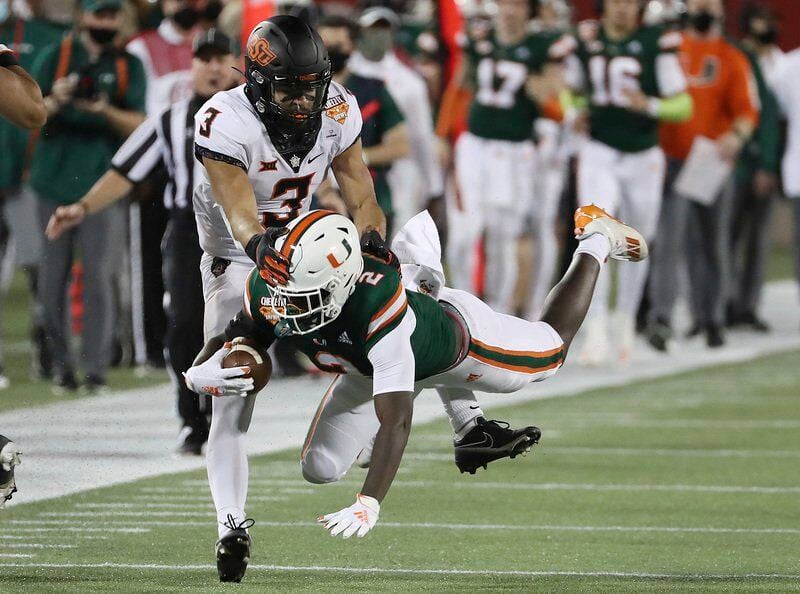 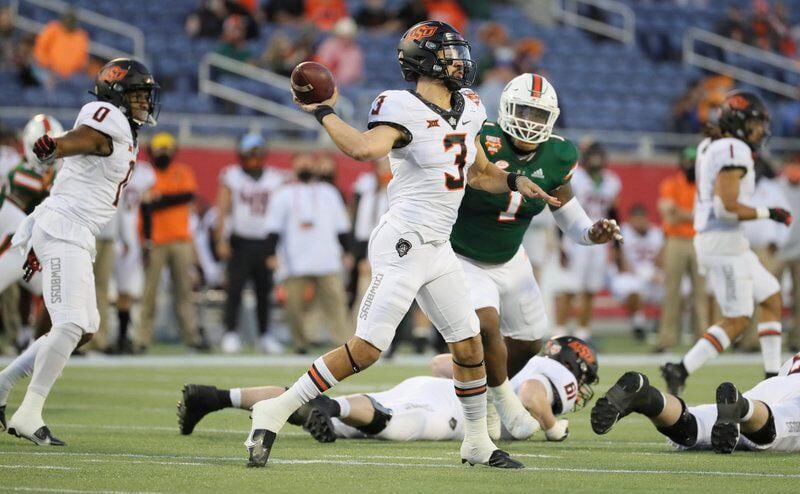 The Bixby High product who entered the bowl game with just a single catch all season, was the Cowboys’ top receiver in a contest that featured the return of senior Tylan Wallace. Presley outshined Wallace, who only played in the first half, and seniors Dillon Stoner and Tay Martin, as the Cowboys beat Miami, 37-34.

Presley entered the game with a single catch for seven yards – ahead of only redshirt sophomore quarterback Spencer Sanders who has one catch for one yard on the season – as he’s primarily been used on special teams. However, he showed Tuesday why the future at receiver for OSU might be bright after Wallace and Stoner leave.

The speedy freshman tied for a team lead with six catches for 118 yards and three touchdowns. Martin and Wallace also hauled in six receptions for 73 and 45 yards, respectively. Presley’s total were both OSU freshman bowl records.

“(I saw) the same thing I’ve seen from the last three years of high school,” OSU coach Mike Gundy said. “What he has going for him is – I have Malcolm Rodriguez sitting next to me and they have the same characteristics – they love to play football, they’re unselfish, they’re tough, they’re athletic and they’re not scared. He’s just going to get better and better with experience.”

Presley’s first touchdown was a 30-yard reception where he had to stop outside the end zone and make a leaping catch before lunging into paydirt on the opening drive of the game. Two drives later, Presley caught a 10-yard pass for a first down on 3rd and long, and turned it into a 32-yard touchdown after weaving through the Hurricanes’ defense.

His final score came with 9 minutes and 50 seconds left in the game when the Cowboys needed one, leading by five points. He ran a post route and caught a 16-yard touchdown pass.

Sanders finished the game completing 27 of 40 passes for 305 yards and four touchdowns and no interceptions, after beginning the game 19 of 22 through the air. Sanders also led the Cowboys with 45 rushing yards on 13 carries.

OSU (8-3) jumped out to a 21-0 lead in the first quarter, but struggled in the second quarter despite taking a 21-10 lead into halftime. Sanders’ passing, especially to Wallace and Presley, in the first half was the story of the second half.

Wallace’s absence in the second half was noticeable by fans and media members. He missed the previous OSU game at Baylor, but returned for one final contest as a Cowboy.

There was speculation about why he sat out the second half and stood alongside his teammates on the sideline. Gundy addressed this after the victory.

“We just talked with him at some point we wanted to get some of the other players in the game that were going to be there next year, and we want to protect him,” Gundy said. “There’s always things in the back of your mind that happen, and I’m not so sure that what took place with Miami’s quarterback didn’t have a little bit of an effect on us.

“I’m not saying that we had a plan for an exact point in the game. … Obviously, he’s got a future that very few people have an opportunity for, so myself and Coach (Kasey) Dunn were very protective of him. We made the choice at that time to let some of the other players get in and compete, so we didn’t have to hold our breath in that situation.”

Wallace’s quarterback had strong words for those who didn’t agree with Wallace sitting out the second half of his final college game.

“He’s done plenty for us,” Sanders said. “I really wish I would hear somebody try and down him or call him a quitter, because they’re going to deal with me. That’s unacceptable and I don’t think that’s OK. If anybody wants to call him a quitter, you just don’t know football. I told him I wished him the best and I have nothing but great wishes his way.”

Miami’s offense was a tale of two halves. The Hurricanes scored just 10 points in the first half as starting quarterback D’Eriq King was 10 of 13 passing for 113 yards and one touchdown.

King left the game late in the second quarter with an apparent knee injury after he ran to the right side of the field and flipped over as he was tackled. King never returned to the game, but N’Kosi Perry came in off the bench and completed 19 of 34 for 228 and two touchdowns.

Yet, when the OSU defense needed to get stops, it did just that. Miami’s final two drives ended with a three-and-out and a fourth-down stop by Rodriguez, an OSU senior, in the final minutes of the game.

The Cheez-It Bowl victory marked the Cowboys’ fourth bowl win in the last five tries with the only loss in there coming last year to Texas A&M in the Texas Bowl. It was also the program’s eighth bowl in the past 11 seasons.