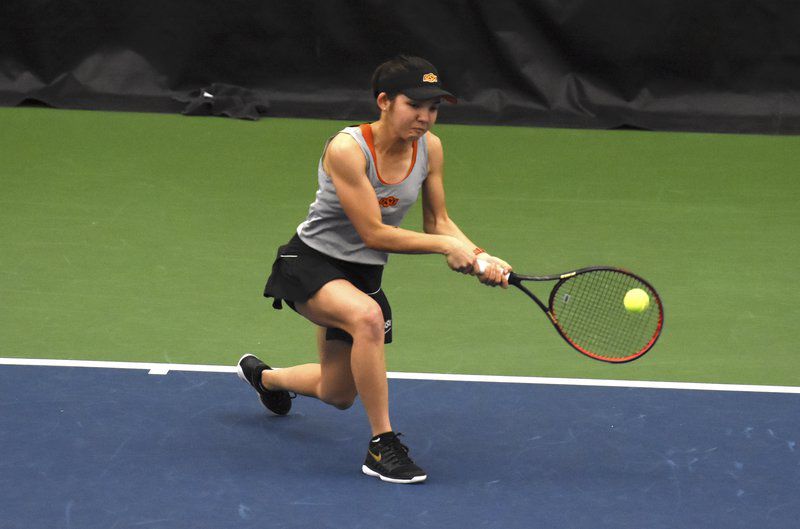 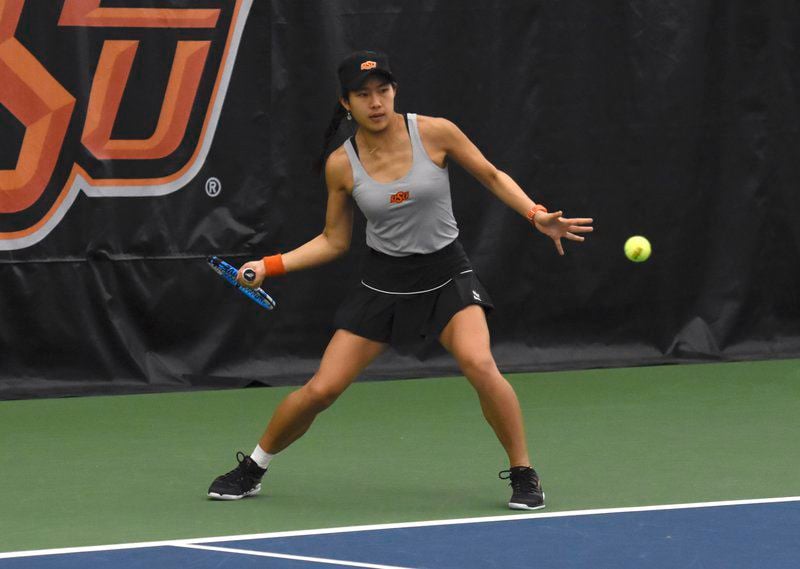 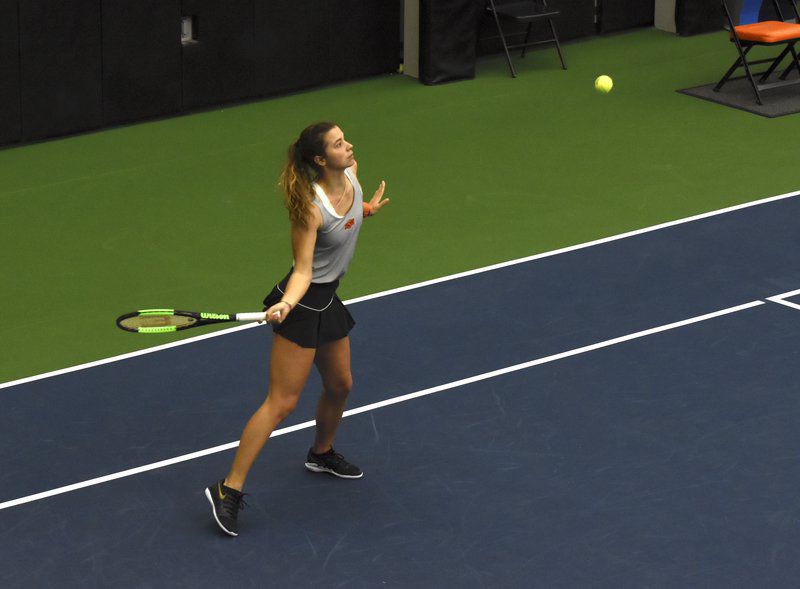 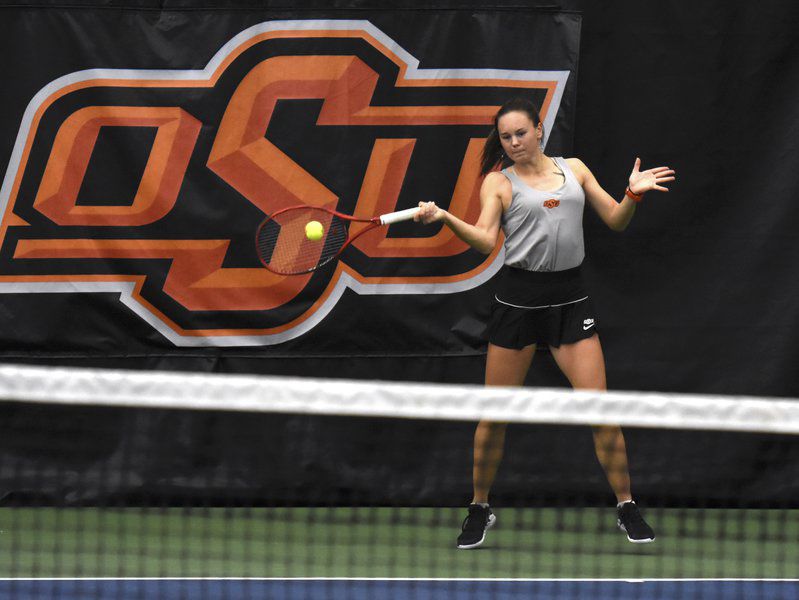 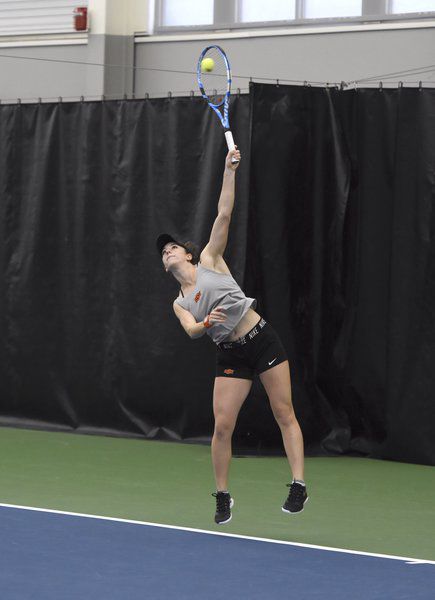 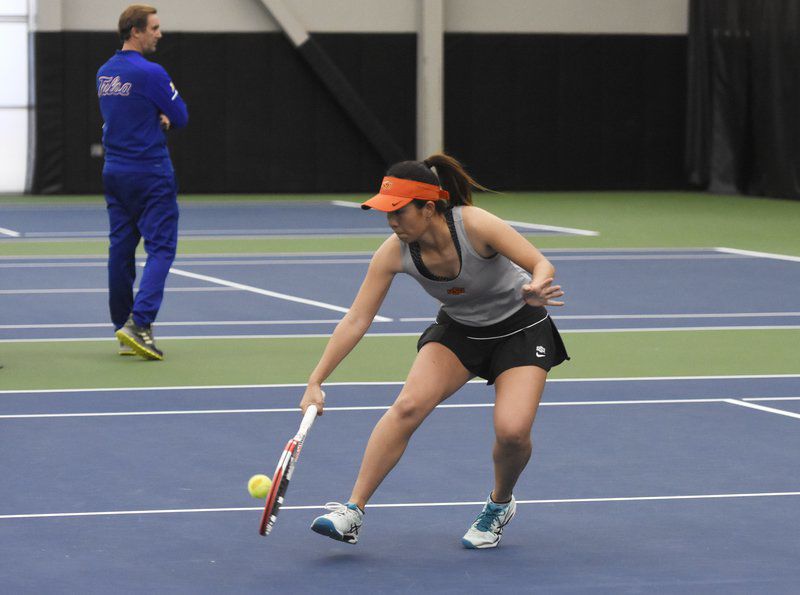 Just six days after droppings its first match of the season, the Oklahoma State women’s tennis team got off to a slow start Saturday against in-state rival Tulsa.

The Cowgirls dropped the doubles point for the first time all season. Seconds after the Cowgirls’ top doubles team won on a deuce point, Tulsa won the doubles point on the next court. It left the Michael and Anne Greenwood Tennis Center crowd quiet.

It put the Cowgirls in a deficit – something they hadn’t faced this season.

About 80 minutes later, that deficit was gone. A flurry of singles finishes – three within less than 30 seconds – capped the OSU 4-1 victory.

“I was a little disappointed in our energy in doubles, but I thought the toughness of sticking through it in singles, and coming out and grinding it out was what today was really about,” OSU coach Chris Young said. “With the quick turnaround, being able to mentally and physically do what needed to be done. I thought we were a little bit softer than what I would have liked in doubles, but I think in singles we showed the heart we needed to.”

While the Cowgirls only needed four points to claim the match, they later made it 6-1 as the final two matches played third-set tiebreaks. The No. 1 and 4 singles matches came down to third sets, but since the team match was already clinched, the remaining singles matches were settled by tiebreak.

Freshman Alana Wolfberg dropped her first set, 6-4, on Court 4. She later needed to rally from a 4-3 deficit in the second set to take it, 7-5.

In the tiebreak, Wolfberg used the momentum gained to take a 2-2 tie and turn it into a 6-2 lead. She won the tiebreak 10-3, winning the final singles match.

Thamchaiwat led 9-8 – needing one more point to win the match – but she lost the ensuing point. Out of frustration, she threw her racquet against the curtain behind the court. Okalova was awarded an extra point, giving her a 10-9 advantage.

Okalova double faulted on her ensuing serve. Thamchaiwat closed the match by winning the next two points, taking the tiebreak, 12-10.

“I think there’s a lot of ways that our toughness was tested today,” Young said. “One, being the quick turnaround. Two, being when you finish 4-0 and the crowd leaves and it’s just you basically playing here. It can easily be a let up and you can say this match really doesn’t matter, the team has won so I can let it go.

“But the fact that those two girls grinded it out is great. Bunyawi won a tough match, and Alana was actually down at the time the team match was clinched. I think a player that’s not as strong mentally could have given that one in and moved on to the next day, but she really rallied and I think that says a lot about her character.”

Thamchaiwat’s win marked her second-straight over an opponent who beat her last year. The No. 29-ranked player lost to Okalova, who’s ranked No. 52, in straight sets last year, 6-4, 6-3.

“At this time last year, she was playing No. 1 singles for us,” Young said. “We played Tulsa, she lost that match. We played Arkansas, she lost that match. For her, she takes the step of being back at No. 1 singles for the first time since those matches a year later, and she’s able to beat those girls. I think it just shows how far she’s come mentally and physically.”

The four other singles matches weren’t nearly as close, as Tulsa didn’t score more than three games in any set. Freshman Ayumi Miyamoto was the first Cowgirl to clinch.

Miyamoto lost the first two games of the first set, but responded by winning 12-straight games, taking her match 6-2, 6-0. It was her second-straight win – also winning 6-1, 6-3 over Arkansas on Friday – since dropping Sunday’s match against Ohio State 6-2, 6-1.

“I think she was disappointed with her play against Ohio State, but her and Jaime looked at the video and spent a lot of time putting in some good work this week,” Young said. “I’m just really proud of her responding with the work she put in and making a difference.”

Young explained switching Thamchaiwat and junior Lisa Marie Rioux at No. 1 and 2 singles following Saturday’s match. He switched them Friday, too.

“I think it was something we wanted to look at this weekend,” Young said. “I think both of those girls are going to have opportunities to play at the No. 1 spot. I think it was just what we wanted to do at this point in time. I think that Bunyawi is playing so well right now, and Lisa is a tough competitor. We’ll use those two to our advantage of whatever we needed to do, but it worked pretty well this weekend.”

The next three singles matches finished within seconds of each other. On Court 5 – on the east side of the complex – freshman Dariya Detkovskaya won five-straight games before splitting the final two. She won her match 6-3, 6-2.

“I think she’s just starting to understand how she needs to play and what her game style is,” Young said of Detkovskaya. “I think we’re asking her to do a few different things than what she came here doing, but I think if she will trust the game plan, her play style and play to her strengths a little bit more, she’s going to be successful.”

Detkovskaya gave credit to an equipment change for her singles performance. During the doubles match, she struggled serving, but later served well in singles.

“I changed my racquet,” Detkovskaya said. “The first racquet was a little bit broken. I didn’t think about my racquet when I played, because it doesn’t matter which racquet is in my hand. Then when I changed my racquet near the end of the doubles, my serve was pretty good for two games. I started serving in singles with that racquet.”

Just a few seconds later across the complex, Rioux closed out the final two games of her second set. The No. 16-ranked Cowgirl won 6-2, 6-2.

“Lenka is still a work in progress, but she’s been really tough at key moments and she’s found a way to win, and there’s something to be said for that,” Young said. “She hasn’t played maybe her best tennis yet, but she’s always there at the end and finding a way to win. That’s what we need at that No. 6 position – someone who is steady – and she’s going to give us a lot of opportunities to win that spot every time.”

Young added he was happy to see his squad play well less than 24 hours after defeating Arkansas – a team it lost to last year. He said he scheduled this weekend with the purpose of challenging his players.

“I think it’s really important,” Young said of his team gaining confidence from this weekend. “As a young team, you need to be able to face adversity and come out on the other side. I think you need to see some rewards for your hard work. We put in a lot of time, energy and effort after that Ohio State match, and to see it be rewarded with two good performances was important.”

The Cowgirls are off until they host Pepperdine on Feb. 16. During the next two weeks, they will work on conditioning and in the weight room to prepare for the outdoor season.