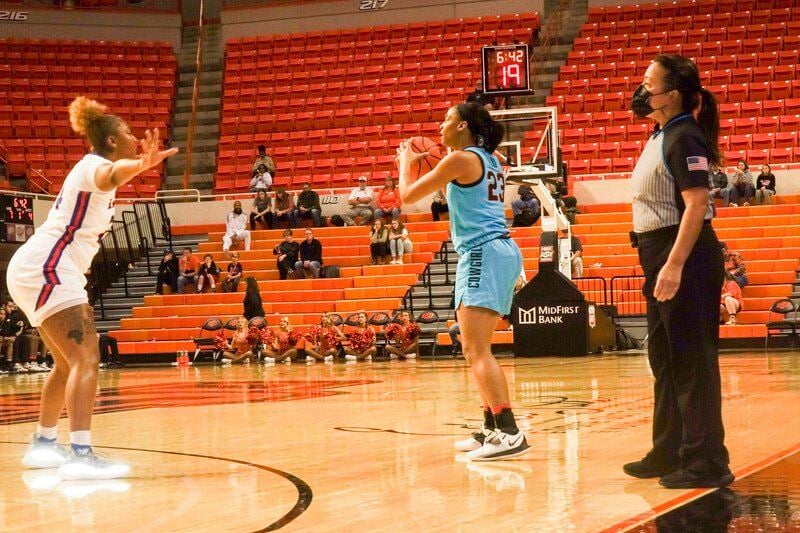 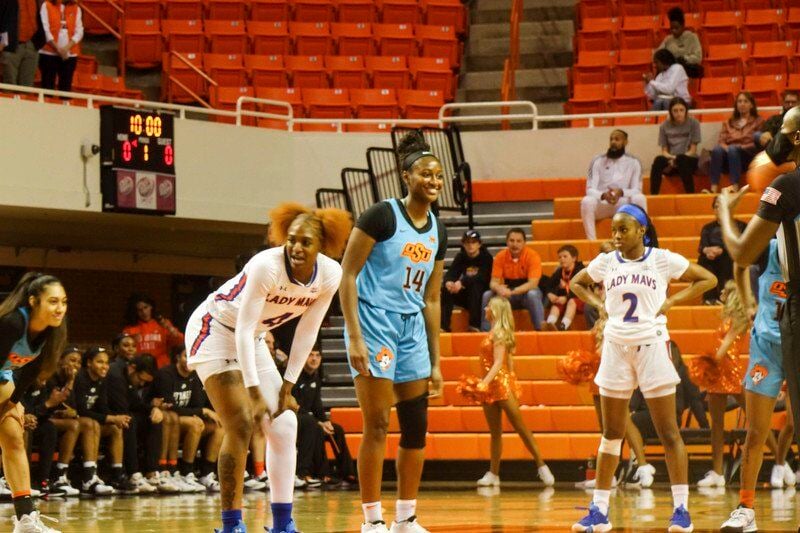 Lauren Fields intercepted a pass, started driving downcourt and glanced up at the clock.

Senior center Kassidy De Lapp was gesturing for the ball, but Fields had to make sure she could connect with her teammate before the buzzer sounded. With a few seconds left, junior guard Fields heaved the ball across midcourt and into the hands of De Lapp, who tossed it into the hoop just in time.

The fast-paced play gave the Oklahoma State women’s basketball team a surge of energy to close the third quarter against UT Arlington, and the Cowgirls preserved their advantage in the fourth. OSU stormed past the Lady Mavericks 61-46 on Friday night in Gallagher-Iba Arena, securing a winning record.

The victory marked a milestone for Jim Littell. In his 11th season as the Cowgirls’ coach, Littell reached the 200-win mark. Dick Halterman, who compiled 333 victories at OSU, is the only other Cowgirl coach to achieve this.

Before the postgame tradition of singing the alma mater, public address announcer Larry Reece took a moment to celebrate Littell’s historic night. Littell said it’s important for his young team to have “little victories” within a game, and De Lapp’s buzzer-beater – which extended OSU’s lead to 45-37 – was a prime example.

“The play to end the third quarter was a big, big play for momentum, for our kids’ psyche,” Littell said. “It was really big that we got that steal and aggressive layup, perfect pass by Lo (Fields), Kass (De Lapp) finished it.”

The Cowgirls (5-4) have established defense as their cornerstone, and it gave them a clear edge against UT Arlington. OSU racked up 12 steals, and Fields and De Lapp combined for half of them.

The Cowgirls forced 13 turnovers and held the Lady Mavericks (6-3) to 0-for-11 shooting from 3-point range.

But defense alone can’t carry OSU through every game. Littell and the Cowgirls, who went 25 for 69 from the field, recognize the importance of strengthening their offense.

“It’s just got to be more consistent,” Littell said. “We gotta be more fluid. …For us right now, the offense is behind where our defense is.”

It’s a work in progress, but the Cowgirls offered some glimpses of hope. Lexy Keys, a sophomore guard from Talequah, scored 11 points, her highest total since the opener against Colorado. Keys had been struggling to find her shot, making only one of 13 field-goal attempts through the previous three games, but reassurance from teammates such as Fields helped her snap out of the slump.

“We need her to step up and make shots, and so I just wanted to keep her motivated,” Fields said. “That’s what we need her for, and she did it tonight.”

Fields brought her usual leadership to the court, scoring a game-high 23 points. Ruthie Udoumoh, a sophomore forward from Broken Arrow, provided a spark off the bench again, contributing eight points and seven rebounds in a span of 14:20.

“I thought probably her minutes were the most efficient of anybody that we had,” Littell said.

After losing three matchups in a row, the Cowgirls are on a two-game win streak. Next, they host North Texas at 1 p.m. Tuesday, giving Littell a chance to record win No. 201. In the postgame press conference, Littell shared his gratitude for the coaches and players who have helped him reach this point.

“Early in my career, I had a mentor, and he told me, ‘Surround yourself with good people, and good things will happen,’” Littell said. “…I think that’s what the 200 means to me most, that I’m proud to be a part of Oklahoma State, and I’ve really enjoyed the journey.”