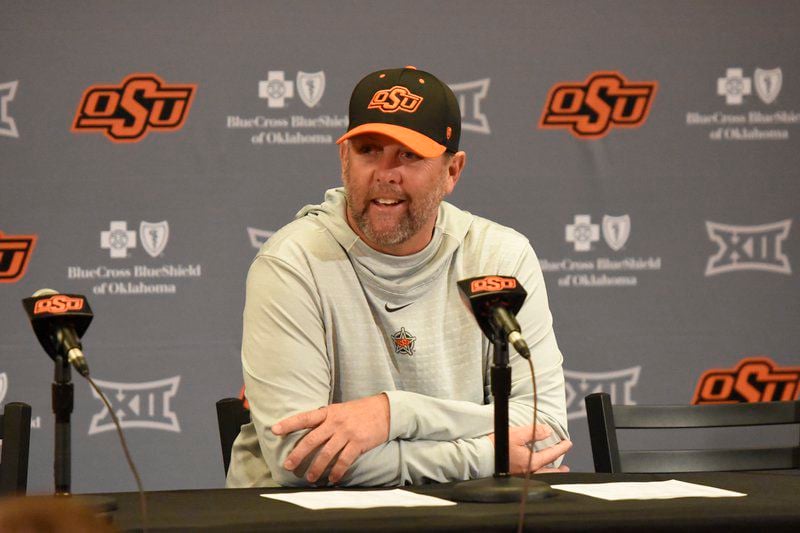 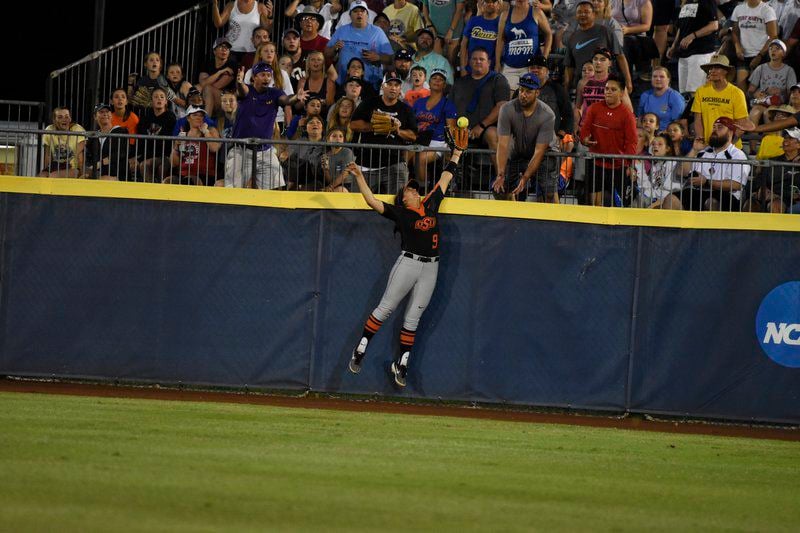 Jordan Bishop/Stillwater News Press Oklahoma State sophomore outfielder Chyenne Factor robs a home run in the Women’s College World Series last year. Factor is one of 14 returnees from a 45-win squad that finished ranked No. 6 and enters as No. 13 this season.

Jordan Bishop/Stillwater News Press Oklahoma State sophomore outfielder Chyenne Factor robs a home run in the Women’s College World Series last year. Factor is one of 14 returnees from a 45-win squad that finished ranked No. 6 and enters as No. 13 this season.

To the Cowgirls, last year is in the past; they aren’t dwelling on it. The rings the players got and the new addition on the outfield wall at Cowgirl Stadium are nice, but coach Kenny Gajewski said it isn’t something they are going to live off of.

It was a big year for many reasons, as OSU won the most games it had in 25 years while also finally breaking through the NCAA Regional round that had stopped Gajewski in his first few years, eventually going all the way to the WCWS for the first time since 2011.

Excitement was palpable at the corner of McElroy Road and Duck Street, but Gajewski wants to build off that success and not just reminisce about it as a new season is once again upon the Cowgirls with Gajewski now entering his fifth year at the helm.

“It was a great year. It should help us. But again, it’s a new year,” Gajewski said at the team’s preseason media day. “And this team is not owed anything. I don’t think they’ve had that type of mentality, but I just try to keep reminding them that, you know, last year is is completely done with and it’s going to probably be even harder as we go along with just the mark on our back.”

After finishing last season ranked No. 6 following a win over higher-seeded Florida in the first game of the WCWS, OSU opens this season at No. 13 in both major polls. The target on the team’s back is pretty big, as it returns 14 players from last season’s 45-17 squad, along with adding three highly-touted transfers and a solid recruiting class.

That doesn’t even include Gajewski’s biggest coup, as OSU was able to land John Bargfeldt, the winningest coach in Tulsa program history with 535 victories and 13 league championships – as the Cowgirls’ pitching coach.

“Yeah, obviously I feel like it was, in my mind, it was the softball move of the year, I don’t know who can top that,” Gajewski said. “And I mean, obviously I’m a little biased there, but I think I’ve heard a lot of my friends and peers were curious how I got that done or how we got that done. I didn’t get it done. Coach Holder let me make it happen. But, I’ve had my eyes on John for a while. Couple years back, he made a phone call to me about another job that he may have interest in as an assistant coach, and then from that point on, it kind of triggered in my mind that man, maybe he’s interested. He’s been nothing short of spectacular here.”

With all these expectations and the amount of talent the team has, it appears that the Cowgirls are once again poised to return to Oklahoma City. Gajewski thinks the same thing as OSU even has bracelets with the latitude and longitude of ASA Hall of Fame Stadium in OKC.

He isn’t shying away from the pressure as Gajewski still thinks the Cowgirls have a lot to show. OSU was picked third in the Big 12 Conference, despite finishing second last year, behind Oklahoma and Texas. Also, he wants to win more than one game in the WCWS, hoping to bring a national championship to Stillwater.

“We’ve got some expectations outside of Stillwater I think that that may be new for some folks for softball, which is kind of cool,” Gajewski said. “I think we’ve been preseason ranked a couple years now in my time here, but not this high in some polls and obviously polls don’t mean anything, but it is perception. And so I think last year got us back on track of where I expect to be here. I honestly do. I don’t think there’s any reason why we can’t attract top talent with our staff and resources, we should be in that mix each year.”

With Bargfeldt joining the staff, as well as probably the largest student assistant group in the country, Gajewski has surrounded his talented squad with a lot of talent. Despite graduating last season, Rylee Bayless, Madi Sue Montgomery and Samantha Show are back, as well as 2018 grads Maddi Holcomb and Emmie Robertson.

Having Show and Robertson help the pitching staff is a luxury, Gajewski said. Add Bayless and Holcomb working with outfielders and Montgomery mentoring freshman Karli Petty at second base, and the Cowgirls are as loaded on its GA staff as it is on the field.

“I’m just glad they’re here,” Gajewski said. “I think one of the ways you can tell how a program is healthy is when former players want to stay around. And I think we have that now. And my biggest challenge now is getting them out of here. I mean, my gosh, driving me crazy at times, but I love them. I do anything for any of them. They’re the kids that that created their new culture and their new standards and cleaned all those trophies off. They were pretty dusty in there in you know, in Gallagher-Iba here so it’s kind of cool.”

OSU will definitely have its work cut out for it with one of the toughest schedules in the country. The Cowgirls head to Baton Rouge, Louisiana, on Feb. 7 for the Tiger Classic, hosted by No. 11 Louisiana State. From there, they will go to Florida for the St. Pete/Clearwater Elite Invitational with another strong slate, including two WCWS teams in No. 7 Minnesota and No. 1 Alabama, as well as an exhibition against Team USA.

The rest of the tournament schedule includes games against No. 25 Mississippi, No. 10 Louisiana-Lafayette, No. 24 Oregon, No. 17 Georgia and a slew of teams receiving votes. Then OSU gets to head into the rough-and-tumble Big 12 with series at No. 6 Texas, No. 19 Texas Tech and No. 3 Oklahoma this year.

“I don’t really like the schedule,” Gajewski said. “I know in June, I’ll like it. Right now, it’s a lot to handle with some new kids, you know. I mean, but heck, you might as well go. Yeah, I mean, you might as well go and see what you can do and make it happen and find out right away who’s got that look in in their eye and who doesn’t. I’d rather find that out now than in OKC.”

After finally bringing OSU back to the the national spotlight, Gajewski is excited for another year, especially with all the expectations. With all the talent and experience and against a schedule that they are really going to be tested, this could be another year that goes down in the history books because as Gajewski said, it’s expected now.