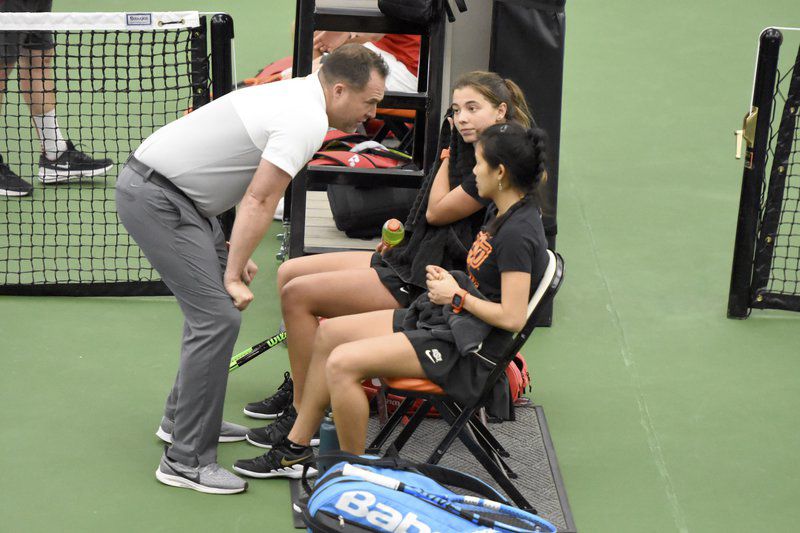 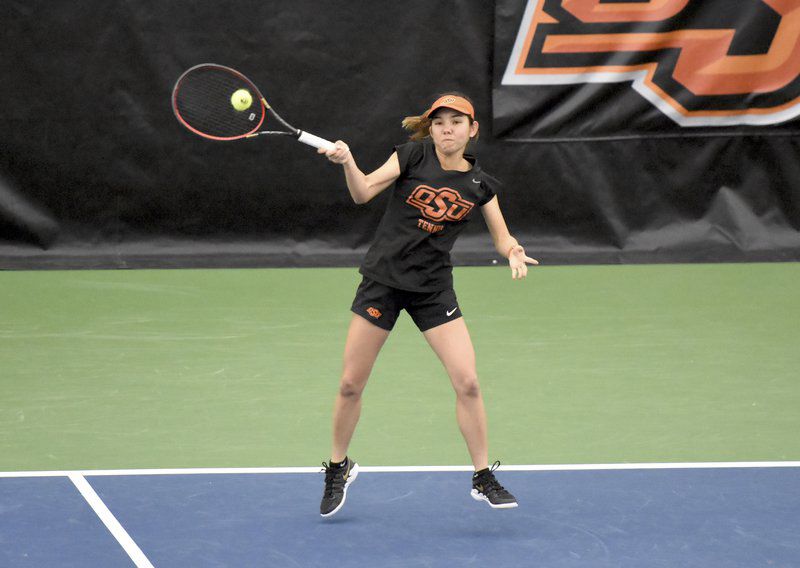 According to Oklahoma State women’s tennis coach Chris Young, his players can’t wait to play a pair of home matches this weekend.

His youthful squad is ready to get the bad taste out of its mouth that is lingering from Sunday’s home loss to Ohio State. It was the Cowgirls’ first loss of the spring season.

OSU will be trying to rebound against a pair of familiar opponents. The Cowgirls will host Arkansas at 5 p.m. Friday and Tulsa at noon Saturday. Both matches will be held at the Michael and Anne Greenwood Tennis Center.

“Yeah, I'd say anxious is a really good word for us,” Young said. “You know, after Sunday's loss, I think it showed our young kids really what college tennis is really all about. There was a lot of learning lessons from there. And, you know, the girls were ready to go on Monday.

“It's like, let's get back out here, and I think it's great that we don't have much time off that we're playing again on Friday and Saturday against regional opponents that we know pretty well and know that it's going to be a very intense atmosphere, as well. I think just to take what we learned from Sunday and apply it.”

On Sunday, the No. 16 Cowgirls fell to previously-ranked No. 25 Ohio State, 4-3. The Cowgirls won the doubles point, but lost four of the six singles matches.

Ohio State won the first set in all six singles matches, but the Cowgirls forced a third and decisive set in five of those. The match came down to No. 1 singles, where No. 17 Lisa Marie Rioux fell to Ohio State’s Shiori Fukuda, ranked No. 11, 4-6, 6-2, 6-3.

Young said his young team, which included two sophomores and three freshmen in singles action, learned a valuable lesson Sunday. He said it was a wake-up call for them to learn about the energy and focus needed in tough team environments like there was Sunday in the Greenwood Tennis Center.

“They just came out firing in singles and to lose the first set and all six courts, I'm not sure that's happened since we've been at the Greenwood Tennis Center before,” Young said. “But the fact that we won five second sets, it showed me a lot about the character of our girls, and now we’ve just got to take what we can and learn from it, because we allowed Ohio State to gain a lot of confidence with how they started the singles.

“I think more or less now, it's just like OK, this is what this type of atmosphere here, this is why I chose to come to Oklahoma State, this is what the building is like when it's full and and it's energetic and environment is like that.”

Young also talked about his biggest takeaway from Sunday’s loss. He said it was those points when games were tied 40-40, as the next point is the game winner. He said his team must be better in those moments moving forward.

“I think that's the biggest lesson that we learned was how to handle these deuce points,” Young said. “I think that's the mark of our teams that have been really successful here is we handled the deuce points really well. We played them competently and aggressively, and we lost a lot more points than I would have liked to on Sunday. But I think it's a learning lesson.”

The young Cowgirls can also turn to one of their former players, who is a student assistant coach on staff. Katie Stresnakova, whose eligibility ended last spring, was with freshman Dariya Detkovskaya on Court 5 on Sunday.

Detkovskaya fell behind 5-0 in the first set before rallying with three-straight games. She later won the second set, but lost the third.

Stresnakova played a similar role her freshman year. She played No. 6 singles, and on occasion, the match came down to her.

In the NCAA quarterfinals – against oddly enough, Ohio State, Stresnakova won the first set but lost the second. She fell behind 4-2 in the third set before rallying to win four-straight games to clinch her match and the team victory over the higher-ranked Buckeyes.

“I think that's the biggest thing for Katie is you know her freshman year, she lost three matches in the third set, and then fourth time was the quarterfinals against Ohio State,” Young said. “I think that's one of the great things about our kids is the fifth-year kids want to give back. Vladi (Babic) helped out a lot last year, Katie's helping out this year and we want to give our kids that when they come to our program and have a lot of experience, and it's a good chance for her to be with someone like Dariya on her court and kind of walking through it.”

The Cowgirls will try to right the ship this weekend against a pair of teams it faced last year. They lost at Arkansas, but beat Tulsa.

Young knows there won’t be any love lost this weekend.

“I think these two teams we always get their best,” Young said. “Tulsa and Arkansas – they want to beat us as bad as anybody. Arkansas's coach was my assistant coach here, Courtney Steinbock, for a number of years, so this her first time to bring a team back to Stillwater, so she's gonna be ready for that. Tulsa’s a big rivalry for us, always has been. They always have good teams. So we know that these teams are always going to give us their best. This is a match that they look forward to and us, as well. It's going to be exciting. There shouldn't be any letdown.”

Saturday’s match has the potential for high energy. When OSU and Tulsa have faced each other during the past few years, both teams have let their emotions show on the court.

“I think with these new kids, I think all these rivalries take a new shape,” Young said. “I think for them, it's just next match. But for Arkansas and Tulsa coming in and they got a lot of veterans on their team, for them, it’s a rivalry. And so that's where our girls need to be ready for it.

“… But you know to get these kids understand when you wear OSU across your chest, it takes on a different shape and form. They have nothing to do with that – what's happened in the past – but they still have the responsibility of kind of carrying on that tradition. And that's the one of the things they learned really quickly on Sunday.”