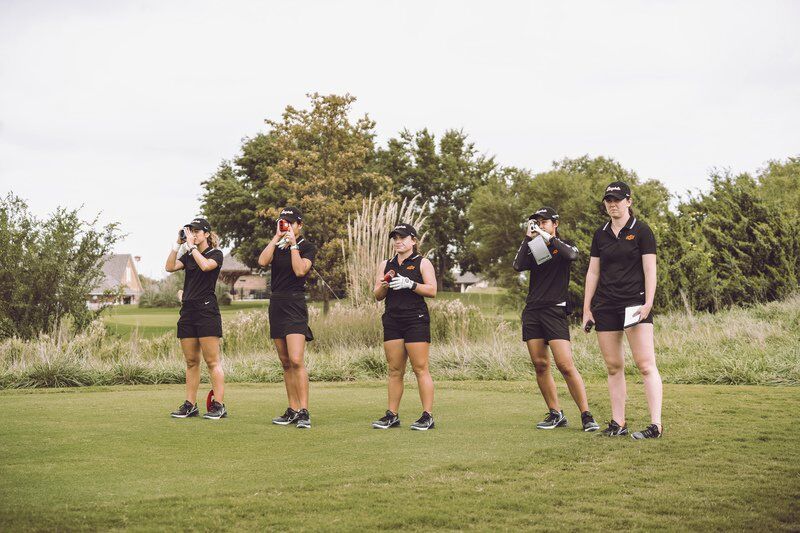 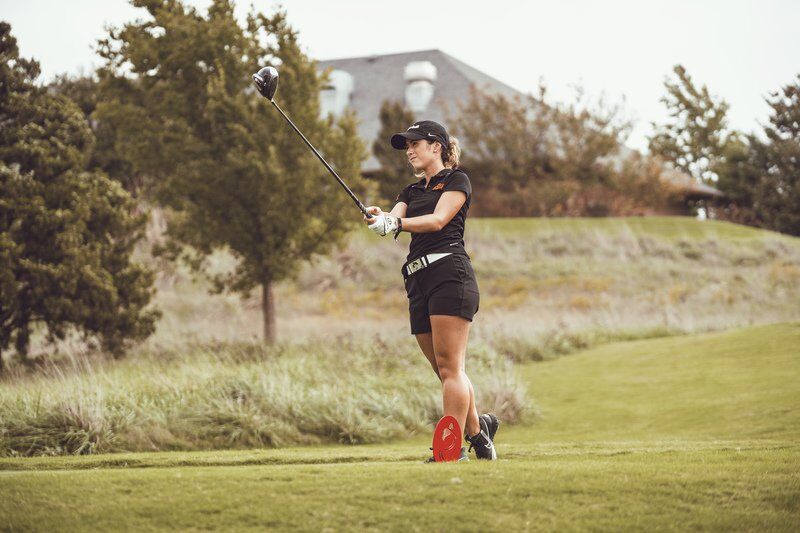 Stephen Howard/OSU Athletics Oklahoma State sophomore Isabella Fierro watches her tee shot at the Schooner Fall Classic in Norman earlier this month. Fierro and the Cowgirls are hosting a two-day event at Karsten Creek, beginning Thursday morning. Fierro will have her mother and sister visting her from Mexico to watch the meet.

Stephen Howard/OSU Athletics Oklahoma State sophomore Isabella Fierro watches her tee shot at the Schooner Fall Classic in Norman earlier this month. Fierro and the Cowgirls are hosting a two-day event at Karsten Creek, beginning Thursday morning. Fierro will have her mother and sister visting her from Mexico to watch the meet.

Isabella Fierro won’t just be playing on her home course for the first time Thursday and Friday, she’ll also be doing it in front of her mother and sister.

The Oklahoma State sophomore women’s golfer will have her mother, Mimi, and sister, Renata, cheering for her when OSU hosts the Cowgirl Classic at Karsten Creek. It will be the first event the Cowgirls have hosted since the 2018 NCAA Championships.

The event will begin at 8:45 a.m. each day, and it will be a 10-team event. Spectators are welcome and admission is free, but face coverings and social distancing are encouraged.

“Everyone is so excited we’re having a home tournament,” Fierro said. “It’s been a long time since the girls have played here, so just the fact that we’re able to play and play here is just really exciting. To have my teammates and my family here, I’m super excited about it.”

The Cowgirl All-American is quite excited to have some of her family here from Mexico this week.

“It’s amazing,” Fierro said. “Even though my little brother and my dad couldn’t make it, they are always with me. But, my sister and mom are here and it’s fun because they’re actually going to get to see what it’s like. … I’m really excited for them to see how it is and how I get a long with my coaches and my teammates. Of course, the weather here, they are kind of worried about it. I’m just like this is normal.”

Fierro, who hails from Merida, Mexico, did say she told her mother and sister they can’t complain about the weather in Stillwater. The high temperature Thursday is 85, but it will drop to 51 on Friday with a chance for rain, and remain under 60 degrees for almost a week.

“The weather is unpredictable and that’s what makes a golf player a golf player,” Fierro said. “I think everyone knows how to hit the golf ball, but knowing how to play with wind, cold weather and extreme conditions is what makes you a good player. I came here because of that, and I told them that please mom and sister don’t complain about the weather. You know it’s going to be cold and it’s going to be rainy, so don’t you even complain about it because there are nine girls on the team and we’re not complaining about anything.”

Fierro is coming off a runner-up finish at the Betsy Rawls Invitational less than two weeks ago in Austin, Texas. She finished one stroke shy of Baylor’s Gurleen Kaur for the victory.

Fierro won the event last year, and was happy with her performance this year.

She also finished in a tie for seventh place at the other meet this fall. Fierro led the Cowgirls at the Schooner Fall Classic in Norman in late September.

“With everything that’s going on with COVID and in our world right now, I think having a positive attitude and having mental toughness – not just on the golf course but in everything I’m doing – (has) really been like a blessing and advantage for me,” Fierro said. “Even though sometimes it’s hard to face it every day, with that mentality, it makes every day a little bit easier.”

Fierro and her teammates are back in town and ready to play on their home course. Obviously, they feel like they have an advantage playing on one of the courses they practice on during the week.

The last time OSU competed at Karsten Creek, the OSU men’s team won the national championship on its home course.

“I think we’re really comfortable playing here,” Fierro said. “This is our home course. But, it’s just another tournament and we have to play with the same mentality and expectations even though we have the advantage of how the greens roll, how the wind is going to blow and which hole positions are better than others. I think we can take advantage of that.”

The Cowgirls will also be helped by the return of sophomore Maja Stark. She will be making her first appearance after leading the Swedish national team to a European championship. Stark is ranked No. 8 in the World Amateur Golf Rankings.

Parking in the Karsten Creek parking lot will be on a first-come, first-serve basis with the overflowing parking will be along Memorial Drive.