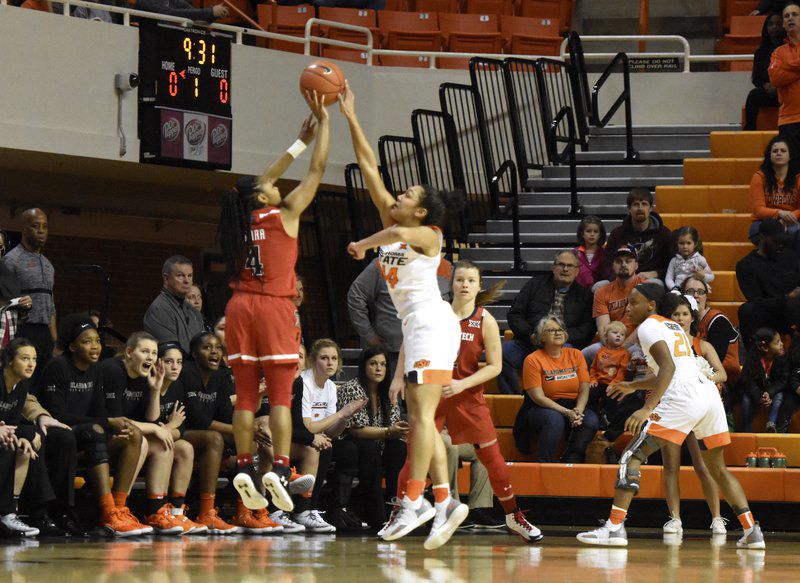 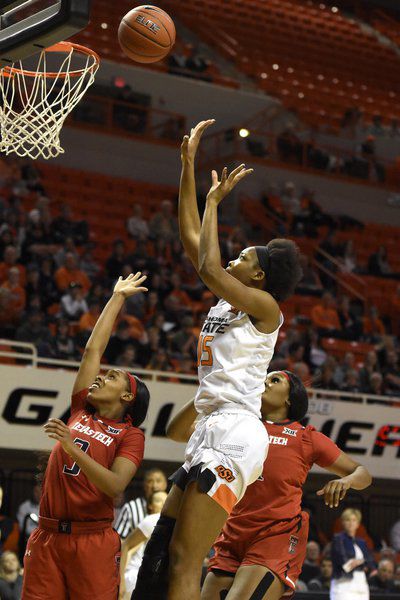 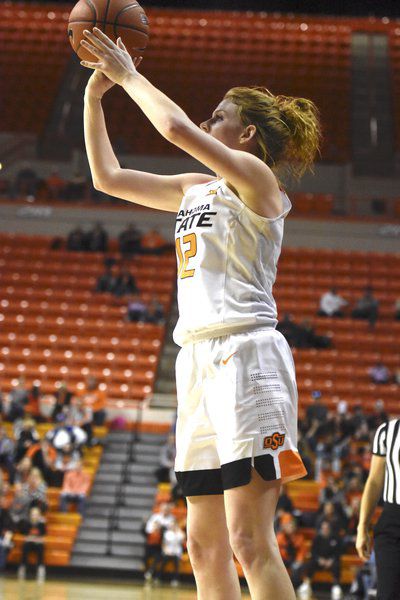 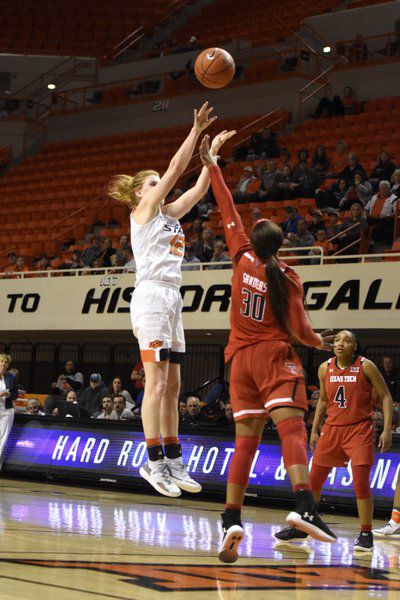 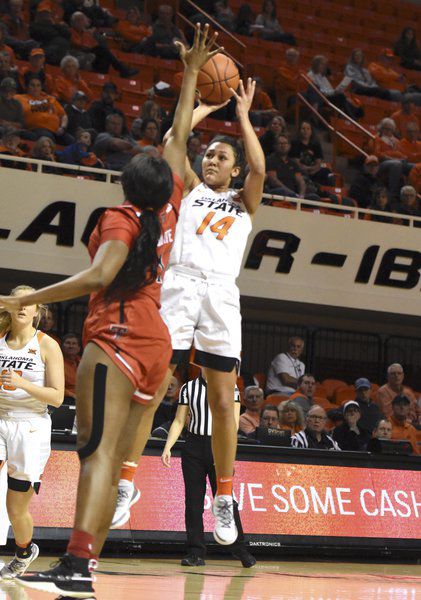 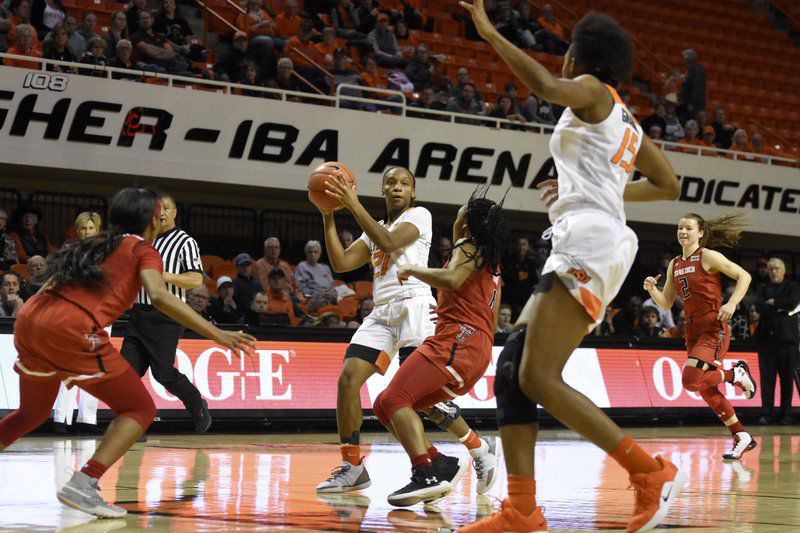 Vivian Gray ran the baseline with defenders draped over her, her route to the rim was blocked.

Instead of trying to toss in a layup with close-to-zero chances of it falling in, she spotted Braxtin Miller on an island in the corner. Gray flung the ball to Miller and seconds later, it was falling through the net.

The assist from Gray came at a crucial time as the Red Raiders – who were down for most of the game but never out – had come back to make it only a six-point game.

The sophomore duo for the Cowgirls were doing that all day, finding players all around the court for open shots.

“We definitely focused on that in practice this week,” Gray said. “Getting it entered faster and getting into our offense faster and moving the ball a lot. I think it showed tonight.”

One play that really showed the basketball IQ of the team is Gray catching a pass from LaTashia Jones before she was immediately double-teamed, but she once again opted against the difficult bucket and found Jones on a rollout for an easy score.

It looked minor, but the Cowgirls were making plays they might not have made a few weeks ago. Miller, a Dayton, Ohio, native, attributes the connection that not only the entire team, but especially her and Gray have when they are looking for an assist.

“We are super close off the court and actually spend a lot of time together,” Miller said. “I think on the court wise, it makes it so much easier when we play off of each other. It is hard for teams to maybe manage one of us, but not both of us. If she starts getting going, it is hard to focus on both of us. Our chemistry helps a lot. I am always looking for Viv.”

With the numbers the two continue to put up – the Argyle, Texas, native Gray with 26 points and Miller with 22 – it has become a scoring threat the team can lean on despite being thin everywhere else in terms of production.

Gray and Miller’s efficiency has become so reliable that OSU coach Jim Littell said it has helped him look into developing a third scorer instead of having to find a couple of kids to make up that production.

“Those two have the ability to complement each other well,” Littell said. “They need to do that. They both have a high basketball IQ. We just have to get them some more scoring. Ja’Mee (Asberry) did fine with the seven, but we have to look up and have more point production out of other people. To do that, we have to trust them and give them the ball more.

“They are working hard on it and that is the thing that we need to do. We are pretty successful when we find that third scorer. In the past, we have had four in double figures and I am just looking to get three.”

Against the Red Raiders (10-5, 1-3 Big 12) – who are experiencing a small resurgence under first-year coach Marlene Stollings – the two started out not being able to get into a rhythm. However, once they forced TTU junior forward Brittany Brewer into early foul trouble, the court began to open up for the Cowgirls.

Brewer, who averages 17 points a game, was held scoreless in the first half because she picked up two quick fouls. The loss of Brewer put a lot of pressure onto freshman phenom Chrislynn Carr, who scored 21 points, but had to take 25 shots to get to that point.

When Brewer came back in after halftime, the Red Raiders started to get their offense going, but Miller and Gray were already red-hot, so the adjustments didn’t hurt OSU too much.

“(Carr) causes a lot of problems with the top of the ball screen,” Miller said. “We had it under control and then number 20, Brewer, comes in and hits some 3s, so we had to switch up our gameplan. That definitely caused a problem with what we were doing. Just some problems. She is definitely a good player, super fast and super versatile.”

Despite Brewer making some big plays in the second half, Littell was overall pleased with how freshman Kassidy De Lapp and junior Mariam Gnanou defended her. He was upset the team lost the offensive rebound battle, due in large part to 13 boards from TTU’s Zuri Sanders, but liked how his posts made scoring tough in the paint.

“We have two (players) that are 15 games into it right now and trying to find their way,” Littell said. “They are battling and playing hard. They knew the scout today. They didn’t let them turn over their right shoulder as much as they have been. I am proud of them and they will continue to get better.”

The Cowgirls (11-4, 2-2) were once again outscored in the third quarter, which has been a theme this season, but only by two points. The play of Gray, Miller and redshirt freshman Ja’mee Asberry ensured it wouldn’t be another third-quarter collapse. Littell was excited his team stood tall and hopes they are starting to turn a corner when it comes to starting strong after halftime.

Despite the great games from Miller and Gray, Littell knows he still needs to find a sidekick and he thinks they are starting to develop. With De Lapp, Jones and Gnanou getting better rebounding the ball as a frontcourt unit – with the guards even joining in as Gray had nine boards – he just needs scoring to come from somewhere.

“It is a case where some kids have to gain some experience and gain some confidence and look for their shot first,” Littell said. “In this league, if you look to pass first and look to shoot, then you are covered. Some of them have to get back to their high school mentality of pulling the trigger.”

With a week off until the Cowgirls’ next game on the road at Kansas at noon Saturday, Littell is excited to get in the gym and keep trying to put the puzzle together around what is already two solid pieces.

“(Gray) has the ability to score at three levels, putting the ball down on the floor with a really good intermediate game and shoots the ball well from the 3,” Littell said. “When you get to the free-throw line, it is pretty automatic and good. … Braxtin is very talented and hits some key, key shots. Both of those are two good players for us to build around.”