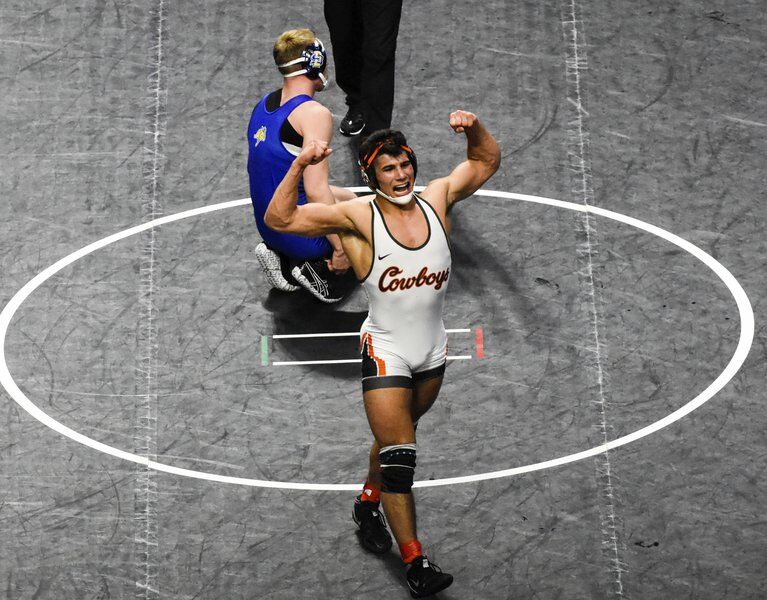 Jason Elmquist/Stillwater News Press Oklahoma State true freshman AJ Ferrari celebrates after beating the No. 1 seed in the semifinals of the Big 12 Conference Wrestling Championships in Tulsa. Ferrari is one of two current Cowboys who will compete at the Olympic Trials starting Friday in Fort Worth, Texas. 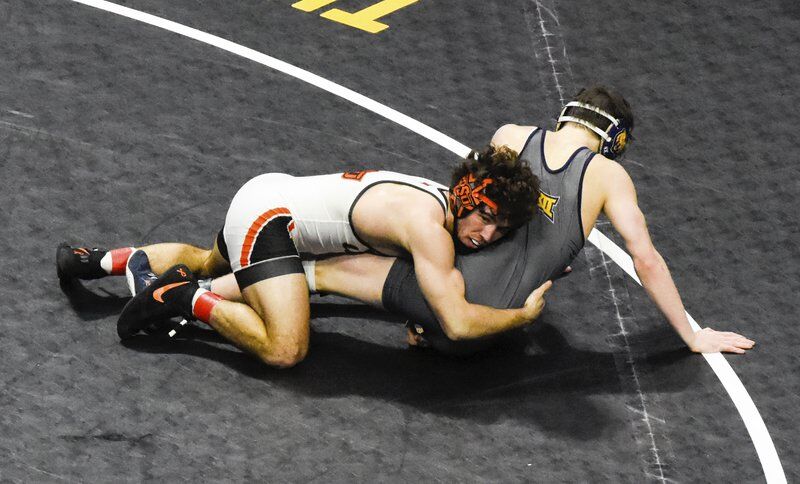 Jason Elmquist/Stillwater News Press Oklahoma State's Daton Fix, left, is one of two current Cowboys who will compete at the Olympic Trials starting Friday in Fort Worth, Texas.

Jason Elmquist/Stillwater News Press Oklahoma State true freshman AJ Ferrari celebrates after beating the No. 1 seed in the semifinals of the Big 12 Conference Wrestling Championships in Tulsa. Ferrari is one of two current Cowboys who will compete at the Olympic Trials starting Friday in Fort Worth, Texas.

Jason Elmquist/Stillwater News Press Oklahoma State's Daton Fix, left, is one of two current Cowboys who will compete at the Olympic Trials starting Friday in Fort Worth, Texas.

Daton Fix and AJ Ferrari wouldn’t have had the same chance they have this week had the sports world not been halted due to the COVID-19 pandemic last spring.

With the 2020 Summer Olympics delayed a year, the pair of Oklahoma State wrestlers will get the chance to compete for a spot on the USA Olympic Team – an opportunity that wouldn’t have been possible a year ago.

Fix was serving a one-year USADA suspension for unknowingly having a banned substance in his system. The ban, which ran from February 2020 to this past February, would have rendered him ineligible for the Olympics and trials had they gone forward last year.

“I am grateful. I would haven’t have had the opportunity to achieve one of my goals, something I’ve dreamt about my entire life – since I got into the sport of wrestling,” said Fix, a former Junior World champion. “I wouldn’t have had that opportunity, and now I do. … I get a second chance to go make an Olympic Team.”

Though Fix has been out of freestyle competitions since his suspension, he has been able to get training in for the discipline.

He has been working with Zoheir El Ouarraqe, a native of Paris, France, who has been Fix’s training partner in freestyle for several years.

“It’s been awesome. He gives me a different feel than a lot of wrestlers in the United States,” Fix said. “He’s really good in freestyle positions, and I’ve learned a lot just wrestling with him all the time.”

Fix will be the second seed at 57 kg, behind top-seeded Thomas Gilman – a former Iowa wrestler who lost to Fix in the 2019 U.S. Open final. In the last freestyle match between Fix and Gilman at the 2020 Matteo Pellicone Ranking Series in Rome, Italy – the last freestyle tournament for Fix prior to his suspension – Gilman narrowly beat Fix.

For Ferrari, he picked up an invitation to the Olympic Trials last weekend due to his performance at the NCAA Division I Wrestling Championships.

The Allen, Texas, native – who became just the third true freshman to win a national champion at Oklahoma State – had to become an NCAA finalist to qualify for the event, after not wrestling last year during his final year of high school.

“Had I not won the NCAA Tournament, I would have had to go to the last chance qualifier – which was this past weekend,” Ferrari said. “For me, I know what I’m capable of. … My three major goals were to be an NCAA champion, be an Olympic champ and I want to be a World champ.

“I’ve accomplished NCAA champion that has qualified me for the chance to get on the Olympic team – get on there and then chase that Olympic gold medal. So it’s great. I’m really excited for this weekend.”

There is also another change to the Trials that benefits Ferrari.

The location was originally supposed to be on the campus of Penn State last year, but instead it will be at Dickies Arena in Fort Worth, Texas, making it easy for many family members and friends in the DFW Metroplex to watch him compete.

“I’m really excited to have family be there,” Ferrari said. “They got tickets and will get to watch me. It’s been my dream to do this, and now the fact that they get to watch me do it, they know all the work that’s ben put in from such a young age – they’ve been there, they’ve seen me miss family functions sometimes, miss birthday parties. So, they understand the sacrifices that have been made by me and my family to get me to this point.”

Ferrari is the sixth seed at 97 kg, but his weight class is much deeper than that.

Two of the top wrestlers in the world will not have to wrestle until the semifinals or finals. Former Missouri wrestler J’den Cox, a 2016 Olympic medalist (86 kg), will get to wait until the semifinals, while 2016 Olympic champion Kyle Snyder is automatically in the best-of-three finals at the weight. It’s one of only two weight classes in which there is that scenario, the other being 74 kg – the weight that features 2012 Olympic champion Jordan Burroughs and two-time World Championships gold medalist, Kyle Dake.

Former Oklahoma State wrestling great Jordan Oliver will also be competing at the Olympic trials. He is the third-seeded wrestler at 65 kg, a weight in which the winner will still have to qualify for the Olympic Games by placing in the top two at the World Qualifier in Sofia, Bulgaria, on May 6-9.

The entire Team Trials will be available across NBCSN, Peacock and NBC Sports digital platforms. Saturday’s finals – where 18 champions ranging from men’s and women’s freestyle and Greco-Roman will be crowned – will be available on NBCSN at 6:30 p.m. Cowboy coach John Smith will be an analyst for the NBC Sports crew.