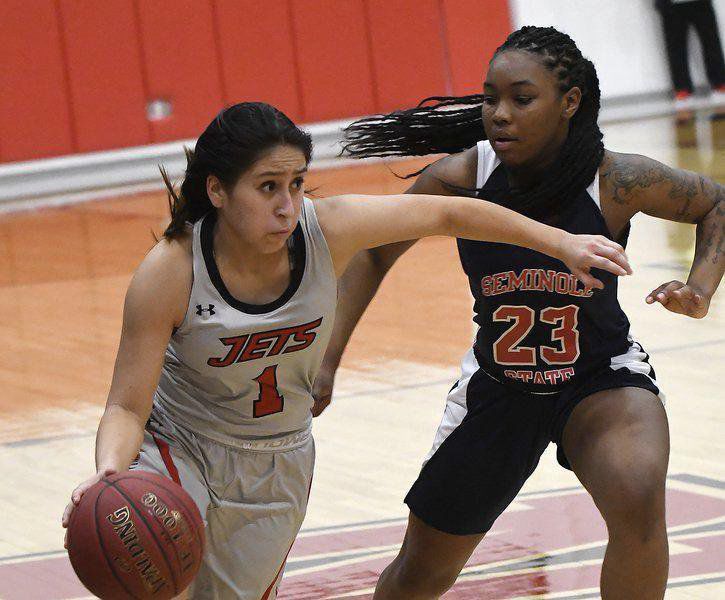 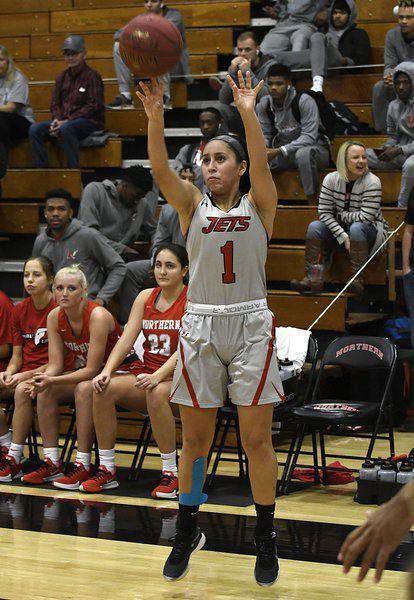 She wants people to know that players from there – or any other Class A school – can succeed at the next level, too.

After her first season at Northern Oklahoma College-Enid, Black is well on her way to that goal.

Black, who was part of a class at Frontier that went 105-15 and made the state tournament all four years, including a state-runner-up nod in 2018, took only five games before she earned a starting nod with the Jets.

That came after scoring double digits every contest coming off the bench, including 22 points a pair of times.

Black said the basketball part of college came easily to her.

“The basketball part wasn’t hard for me because I have always had that to rely on and it is just normal to me,” Black said. “Basketball has always been easy for me. The group of girls that I have been playing with, they were so nice and welcoming.”

The difficult thing like most students was coming from a small school like Frontier, which sits on a hill overlooking farmland on the outskirts of Red Rock. Going from there to Enid, a city of about 50,000, took a bit to get used to.

“It was a big transition,” Black said. “Moving away from home was probably the most difficult part for me. I am such a homebody coming from Frontier and that small of a school, knowing everybody and everybody being your family since I was in kindergarten.”

Classes also took a bit to transition to as in college, the assignments and deadlines were all up to the student, not the professors.

“Coming into college, even at a JuCo, it was like, ‘This is what you are going to do, you have to do it a certain way,’” Black said. “This is when it is due, no later.’ I have always made my assignments and deadlines and everything, but it was definitely a wake-up call.”

On the court, Black impressed right away. Her 3-point acumen and quick play on the court helped her rise up the roster quickly. Her coach, Scott Morris, preferred a slower pace than the run n’ gun that Black ran with the Lady Mustangs, but she adapted quickly.

“One thing that I was worried about coming to NOC-Enid was that my coach liked to slow the offense down and get a good clean shot, which I understand,” Black said. “Coming to that, it was a little bit harder, but I felt like for me, I didn’t have to change my game as much because it just worked. I don’t know how to describe it, but everything fit together.”

Defensively, she went from Frontier’s pressuring man defense to mixing between the man and the zone, but she worked on that and started getting results on that side of the ball, as well. The biggest adjustment for Black was handling the ball and running the offense when she was put at point for the Jets.

At Frontier, she was a shooting guard, usually a catch-and-shoot player who could hit from anywhere on the court. Black, who is 5-foot-5, had to move positions around in college.

Black said if she makes it to a Division I school, which is her dream, she would like to play on the wing, but understands if she has to run point.

In Black’s third start, she scored 25 points. She would score at least 25 points six more times, including her season high 29 against Seminole State in the NJCAA Region II Tournament in Shawnee.

Black shot 5 of 13 from 3-point range, a common theme in her freshman season as she averaged 31 percent on the year. She finished eighth in made 3-pointers throughout NJCA Division I with 98 makes.

“My coach had a lot to do with that,” Black said. “I don’t know if I would be able to shoot as well as I have been without him having the confidence in me and giving me that confidence. I didn’t even start at the beginning of the year. One thing he noticed about me was that I could shoot. That was one thing that I had to prove to him. That was one thing I know I could do well and if I wanted a spot, I knew I had to do something and it was the 3-point shot thankfully.”

The Jets followed up that win with a victory over Northeastern Oklahoma A&M to advance to the regional title game, where Black scored 25 – including seven three-pointers – in a losing effort to Murray State College.

Black said she hopes that her immediate success can show that no matter what high school class players come from, there is talent everywhere.

“My dream is to play D-1 and I feel like Frontier has always had a good group of athletes,” Black said. “They have had a good group of basketball athletes. I just want to live up to that and show that Class A basketball isn’t as small as everybody thinks it is. You can produce good players from it. That has been the big deal is that, ‘Oh, you are just from a Class A school.’ I wasn’t getting recruited by a lot of people because of that. I want to prove that Class A is a good class and there are always good athletes that come from it.

“Coming from Frontier, it has always been my home and family and I just want them to have a name. I want to bring Frontier up and I have always had that pressure, but it is a good pressure.”

Off the court, Black is looking to stay in shape. With everything closed in Enid and Red Rock, she has bought her own ball and does ball handling drills at her house and works out on the weightlifting equipment her dad bought. She wants to be ready for her sophomore season, hoping to parlay it into a Division I offer as NOC-Enid is only a two-year school.

In the classroom, she doesn’t know what she wants to be yet. She has gone from wanting to be a journalist to now taking coaching courses, but her main focus is on the court, hoping to take that next step for herself and Frontier.

“I just know that I want to keep playing ball,” Black said.