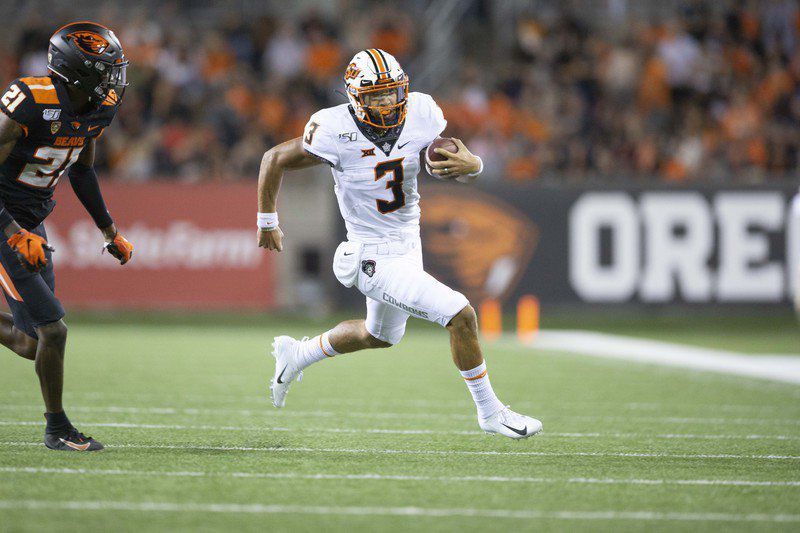 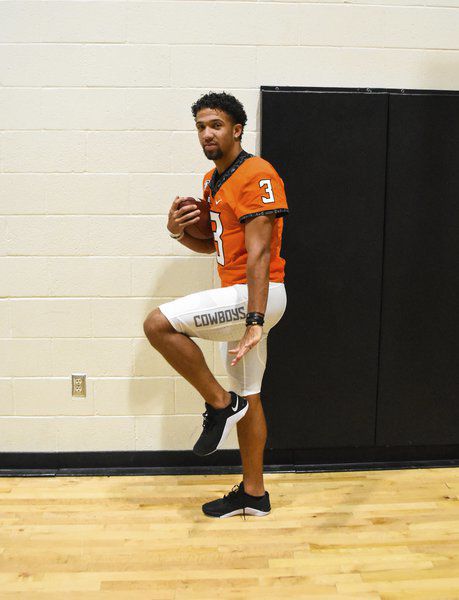 Jason Elmquist/Stillwater News Press Oklahoma State redshirt freshman quarterback Spencer Sanders might be doing the Heisman pose for real if he keeps up the same performance he had against Oregon State.

Jason Elmquist/Stillwater News Press Oklahoma State redshirt freshman quarterback Spencer Sanders might be doing the Heisman pose for real if he keeps up the same performance he had against Oregon State.

Spencer Sanders was going to have the biggest moment of his young college career, and his parents weren’t just going to watch it from Denton, Texas.

The former four-star quarterback in high school who passed on offers from all across Big 12 and Southeastern Conference country to play at Oklahoma State was about to make his first career start at the college level in Corvallis, Oregon, and they were going to be there to witness it.

It’s a moment his father, David Sanders, had built up because he hadn’t bought into the Cowboy coaching staff saying via the media that there was uncertainty about who the starting quarterback would be all the way until Gundy’s last media interview on the Big 12 Conference coaches’ teleconference.

“My dad wanted to act like he knew I was going to get it, but deep down he didn’t know,” Spencer Sanders said. “He just wanted to be confident for me. He was just really happy.”

The moment wasn’t without some turbulence, however.

Sanders admitted Monday that he is not a fan of flying.

“I’m terrified of planes,” Sanders said. “Terrified of them. Don’t like it.”

With what Sanders showcased in his first game, he may have Big 12 defensive coordinators terrified of him now.

With four years of eligibility still to his name, his first game was anchored with an offense that combined for 555 yards and scored seven touchdowns with the young signal caller behind center.

“He played well and handled the offense well,” Gundy said. “I didn’t think that he got flustered at any time, which is important for a quarterback at any level or any school.”

But it’s not just his play on the field that had the head man happy after the first game.

Gundy also was focused on how Sanders controlled the huddle and the hype of being out on the field and trying to lead a Power 5 Conference offense.

“I thought he had enough energy to bring a lot to our team, but not so much that he got out of control,” Gundy said. “I think that is important if you are playing that position. It was one game, but we will see how he progresses as the season goes on. We were pleased with what we were able to get out of him last Friday night.”

It wasn’t just through the air – which has been the focus of Cowboy quarterbacks for a few years now – that Sanders got the Oklahoma State offense moving.

He rushed for 119 yards on 13 carries, and his athleticism helped hold the Oregon State defense to just one sack of Sanders.

“I’ve got great receivers who are really good at blocking along with being really good at catching, so if I do pull one (and run), I’ve got great guys around me to protect me and I find myself just one-on-one with a corner or safety that I can make a move to score,” Sanders said.

Sanders’ highlight moment came on a run along the sideline in which he attempted to leap over a diving Oregon State defender to pick up extra yards – ultimately landing out of bounds when he came back down to the turf.

Gundy said Monday he doesn’t anticipate talking to Sanders about protecting himself from taking hits and the risk of injury.

He doesn’t necessarily need to. Sanders has already received such a talk.

“I told him right after, ‘Don’t you ever try that again. Just run out of bounds. Don’t put yourself at risk,’” said redshirt freshman offensive lineman Bryce Bray, who started at left guard for the Cowboys.

Bray may have more pull with his quarterback.

They both came in together in the same recruiting class and both redshirted together last season. Most games last year, the two could be spotted talking along the Cowboy sideline when they knew they weren’t going to be getting onto the field in their first year in Stillwater.

“There’s been an insane amount of growth. I think we both kind of grew together at the same time, but it’s crazy,” Bray said. “I know a lot of people wanted him to play last year, but I’m so happy he was able to have that year. I thought he could play last year, too, but seeing him this year, I’m glad he got that extra year (to prepare).”

And after Sanders led the Cowboys to a lopsided victory, and jumped over Oregon State defenders, and pleased the Cowboy fans frothing at the mouth to see what the former Texas Gatorade Player of the Year and Mr. Texas Football could do, Sanders said his mother, Carrie Sanders, was overcome by what he had accomplished in that first game.

“I heard my mom cried a little,” Sanders. “So that’s always good.”