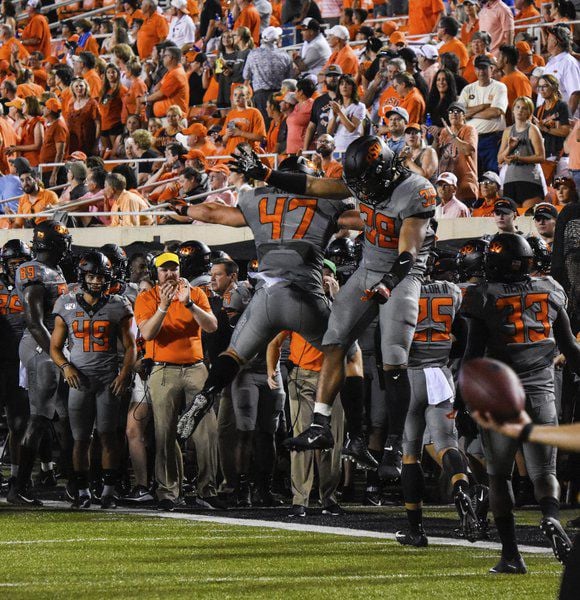 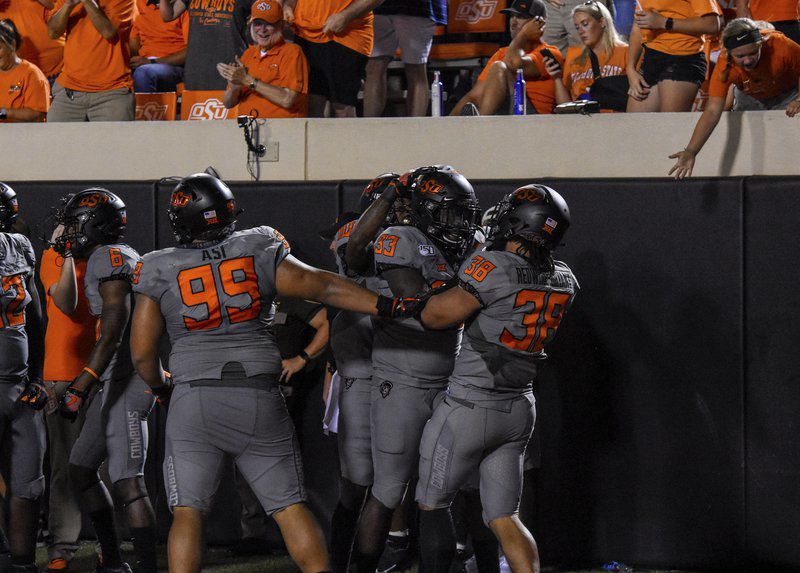 Jason Elmquist/Stillwater News Press Oklahoma State redshirt senior linebacker Philip Redwine-Bryant (38) is mobbed by teammates after intercepting a pass in the third quarter of Saturday’s home opener against McNeese at Boone Pickens Stadium. The interception by Redwine-Bryant, who is a former walk-on who has been voted the special teams captain by his teammates, set up another walk-on – redshirt junior transfer running back Micah Cooper – to score his first touchdown with the Cowboys. 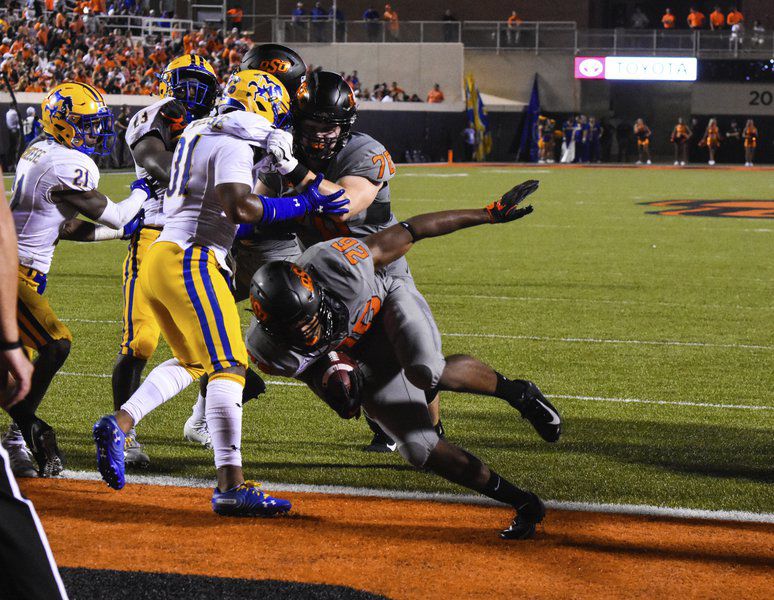 Jason Elmquist/Stillwater News Press Oklahoma State redshirt senior linebacker Philip Redwine-Bryant (38) is mobbed by teammates after intercepting a pass in the third quarter of Saturday’s home opener against McNeese at Boone Pickens Stadium. The interception by Redwine-Bryant, who is a former walk-on who has been voted the special teams captain by his teammates, set up another walk-on – redshirt junior transfer running back Micah Cooper – to score his first touchdown with the Cowboys.

There wasn’t anybody better who Philip Redwine-Bryant could think of to finish his opportunity in the blowout of FCS opponent McNeese on Saturday.

The former walk-on linebacker who was awarded with a scholarship this past offseason enjoyed watching as walk-on running back Micah Cooper surged into the end zone for a score late in the third quarter after Redwine-Bryant gave the Cowboy offense the ball at the goal line with an interception.

“It does hurt a lot because it was right there, the pick-six,” Redwine-Bryant said after the game. “… Micah Cooper is the hardest worker I’ve ever seen – other than maybe Dillon Stoner. You see him after practice taking extra reps and stuff.

“I was so happy for him. He deserved that. He really did. And there is no other guy I wanted to score for me than him, because he’s worked for that.”

And that’s exactly what Cowboy coach Mike Gundy was going for.

“I would have liked to have seen him go ahead and score (on the interception), but we got (Cooper) a chance to score who is another walk-on,” Gundy said following Saturday’s victory in the home opener. “So he got a chance to get a touchdown, which was pretty cool.”

Cooper elected to walk-on at Oklahoma State recently after several stops along his college football career. The Madill native played at Henderson State – a Division II program in Arkadelphia, Arkansas – and Northeastern Oklahoma A&M in Miami before arriving at Oklahoma State.

He first got on the radar of fans and media in the season opening blowout at Oregon State, when he got four carries for seven yards late in the contest.

“As he continues to improve, I see him getting more carries,” Gundy said during his Monday press conference. “He was slowed a little bit with a quad strain – didn’t practice much last week – but he wanted to get in the game and play this past weekend.”

Cooper’s first touchdown as a Cowboy was set up by Redwine-Bryant when he snagged an interception inside the McNeese State 20-yard line and returned it to the goal line.

Redwine-Bryant admitted after the game, though, that he kind of lucked into his first career interception.

“To be honest, I was late on the drop a little bit, so I just saw the ball in the air and tried to grab it,” the redshirt senior from Harker Heights, Texasb said. “Good thing I had Kevin Henry right there next to me, because he took the (running) back, when I was supposed to have him at the point. So I stayed back, sat there and read the ball and made the play.”

The replay looked close on whether Redwine-Bryant had broken the plane of the goal line, and had he stretched out it would have certainly been a touchdown. But he said getting the score wasn’t what was going through his mind in those final seconds of the interception return.

“A the end of it, Mike Gundy was going through my head of saying, ‘Ball security is the most important thing,’” Redwine-Bryant said. “So I decided to tuck it and roll with it. If I get a touchdown, I get a touchdown. If I don’t, I’m taking one for the team – it’s alright.”

Redwine-Bryant, who led the special teams in tackles last season and was voted a special teams captain by his teammates the past two years, has seen limited action on the defense during his career – typically late in blowouts.

So to see him get the team’s second interception of the season was just as special for Gundy as seeing Cooper cross the goal line for the score.

“It’s awesome for him,” Gundy said after Saturday’s game. “We have so many young men on our team that are walk-ons that are now on scholarship, and he’s one of the leaders of our team. It’s fun for me as a head coach to watch those guys make plays.”