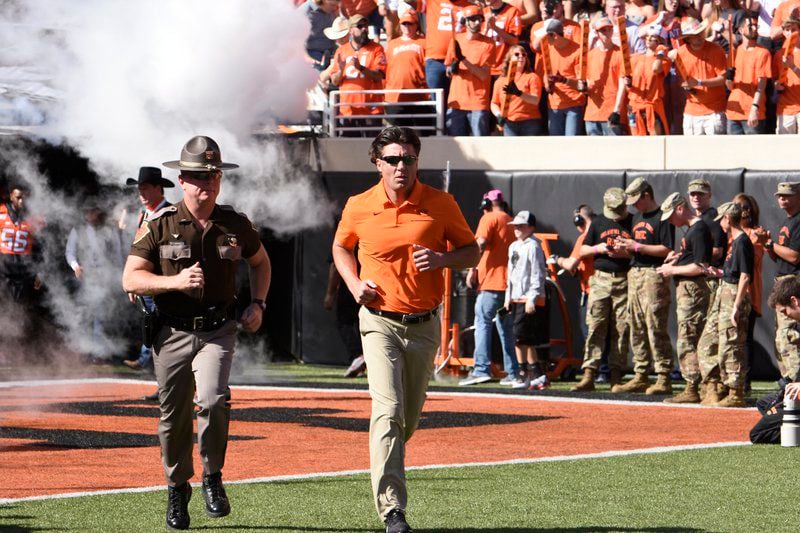 Oklahoma State football coach Mike Gundy says the program has a "good recipe" for recruiting through the pandemic. 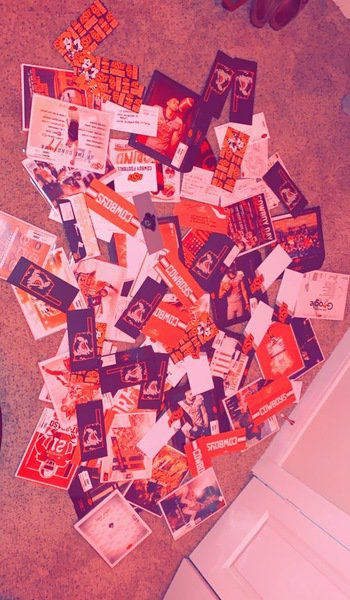 Via Twitter (@baskerville2021) Oklahoma State football target C.J. Baskerville shared a photo on April 2 of a pile of postcards from the OSU football program he received.

Oklahoma State football coach Mike Gundy says the program has a "good recipe" for recruiting through the pandemic.

Via Twitter (@baskerville2021) Oklahoma State football target C.J. Baskerville shared a photo on April 2 of a pile of postcards from the OSU football program he received.

Oklahoma State football would have been preparing for one of its biggest recruiting weekends of the spring this week, prior to the novel coronavirus pandemic.

Mike Gundy and his staff would have been hosting recruits – and fans – at Boone Pickens Stadium for the annual spring game.

In previous years, the recruits and their families would have gone over to the Sherman E. Smith Training Center to partake in a carnival-like festivity – away from fans – with current and former Cowboys on hand.

However, in-person recruiting has been on hold.

But that hasn’t completely changed the landscape of recruiting for the Cowboys.

“We would just be getting ready to go out and evaluate in two weeks,” Gundy said during his media teleconference last week. “So what’s taking place up until right now is the exact same as if we didn’t have the virus, except for the official visits coming on campus. So those official visits will have to happen at a later date. I’m going to guess, during the season. Evaluation, scholarship offers all those things that we talked about, it’s the exact same thing.

“And I’m gonna go back to technology. Technology has allowed us to see everything that most of us need to see on a player to either make a decision to offer him or hold off at this particular time. We know more about players now without ever seeing them, than we’ve ever known before. So the official visits that would have happened over the next two weeks is the only setback we have. That’s my opinion.”

The uncertainty of what technology at their disposal that is permissible by the NCAA was a frustration for the Cowboy coach.

Gundy was critical of the time it took for the NCAA and conference commissioners in figuring out how football programs could move forward – for both recruiting and coaching.

“So we’re following guidelines on how we recruit, different ways we can recruit – text messages, FaceTime, we could use Zoom, now you can’t use Zoom, so that’s going back and forth,” Gundy said. “But everybody needs to be moving faster right now and make quicker decisions, in my opinion. But other than that, we’re just following along. And in whatever guidelines they give us, that’s what we’re doing.”

While there hasn’t been much movement in regard to limitations or expansion of recruiting during this pandemic.

The NCAA first announced a proclamation of a dead period for in-person recruiting through April 15, which was then extended to May 31 at the start of April. This suspended any official or unofficial visits to campuses from prospective student-athletes.

However, programs have still been allowed telephone calls and written correspondence during the dead periods.

“We’ve got a little something going, and we think we’re ahead of the game,” Gundy said. “It’s like having a good recipe.”

So what are the ingredients for the recipe that is working for Oklahoma State football?

“I’m not gonna tell anybody what we’re doing and how we’re doing it,” Gundy said. “But Todd Bradford (Director of Football Recruiting) is highly, highly, highly intelligent, and his staff, they come together and we’ve got a little something going on that’s good.

“And hopefully, it’ll give us an advantage.”

It’s possible the main ingredient is paper – a lot of it.

On April 2, a day after the in-person dead period was extended until June, Oklahoma State target C.J. Baskerville – a three-star safety from North Richland Hills, Texas – tweeted out a picture with a large pile of postcards from the Oklahoma State football program.

“You know, we’re gonna start recruiting when we do, you know – whether there’ll be distance involved or whatever, that the NCAA says,” Gundy said. “This is what we’re doing, we’re all going to follow the same rules. So we’re all going to be in the same boat.

“But I don’t have any question that our people are doing a great job right now. And working with every avenue and every different way we can to try to give ourselves the best chance to have a recruiting class.”