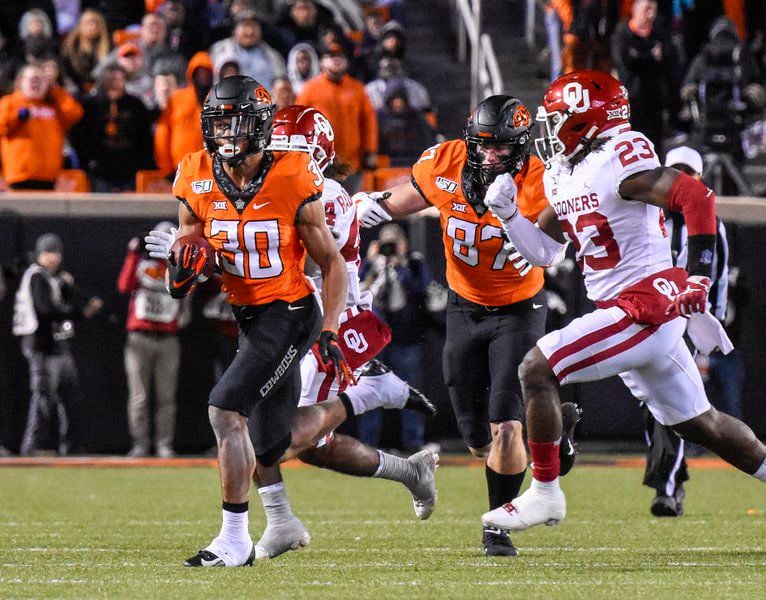 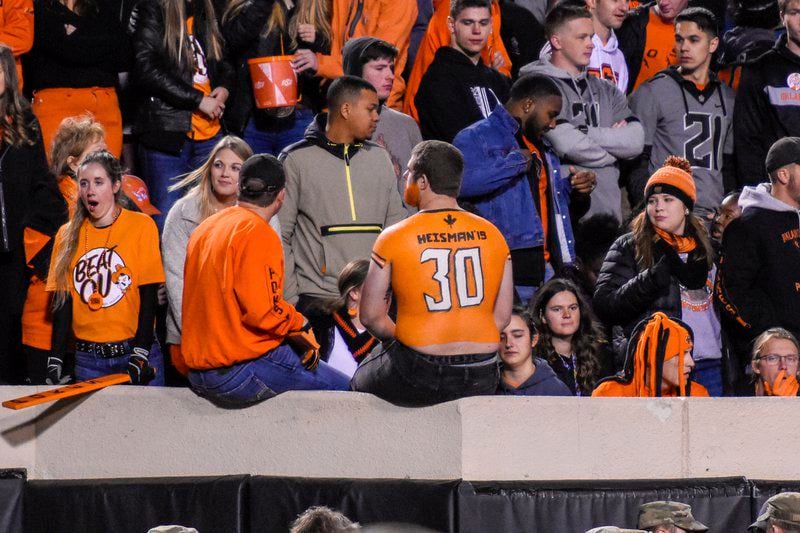 An Oklahoma State student painted his body in support of Cowboy running back Chuba Hubbard in his bid for the Heisman Trophy at Saturday’s game against Oklahoma.

An Oklahoma State student painted his body in support of Cowboy running back Chuba Hubbard in his bid for the Heisman Trophy at Saturday’s game against Oklahoma.

In the grand scheme of the 2019 Oklahoma State football season, it witnessed one of the most historic individual performances in Big 12 Conference history.

Chuba Hubbard became just the eighth player in the 25-year history of the conference to rush for more than 1,900 yards in a single season – joining the likes of Ricky Williams, D’Onta Foreman, Darren Sproles and Adrian Peterson.

His regular season total of 1,936 yards rushing ranks 40th all-time in FBS history, and that includes 25 players ahead of him that factor in bowl stats, too. If he elects to play in the bowl game and rushes for his season average – which is 161.3 – he would finish with 2,097 yards, which would vault him up to 18th all-time for a single season performance.

And that may be possible, too, with Cowboy coach Mike Gundy commenting after Saturday’s game that he intends to “shut down” Hubbard for the next two weeks – which is made possible with OSU not knowing playing in the conference title game and not knowing which bowl it will play in until Sunday’s selection.

“I do think he’s a little bit fatigued,” Gundy said. “The last three weeks or so, he’s not been quite as electrifying as he was early in the season. The reason for that is just wear and tear. We always try to protect those guys, but we haven’t been able to protect him. We’ve had to ride that horse.”

His workhorse wasn’t producing quite as he had been throughout the year.

In the final three games of the season – two of which were against the worst two rushing defenses in the Big 12 Conference in Kansas and West Virginia – Hubbard’s production took a drastic dip on the field.

In the stretch run, the redshirt sophomore averaged 4.55 yards per carry and just 111 yards per game. In the previous nine games, Hubbard was averaging 6.8 per rush with an average of 178 yards a contest.

And the 104 yards – with a 4.3 average per carry – against Oklahoma, was his lowest rushing performance outside the 44 yards against McNeese when the had just eight carries.

“I wouldn’t say I’m fatigued,” Hubbard said following the Bedlam loss. “Obviously your body’s going to hurt, and stuff like that, but that’s just football. But I believe all that offseason training, all that stuff, gets you prepared for this. You’ve always got to bring your ‘A’ game every game, and I don’t feel that I did that.”

Hubbard has likely seen his hopes of going to New York City fafor the Heisman Trophy ceremony fade with the regression in numbers the past month.

But he is still considered the driver’s seat for the Doak Walker, given to the nation’s top running back.

Only one other running back carried the rock at least 300 times this season – Boston College’s A.J. Dillon, who had 318 rushes for 1,685 yards. Even Jonathan Taylor of Wisconsin, which was one of just 11 Power 5 Conference teams to attempt fewer than 300 pass attempts this season, rushed the ball 30 fewer times than Hubbard. And Ohio State’s J.K. Dobbins – who is a Doak Walker Award finalist with Hubbard and Taylor – had just 250 rushing attempts.

There is also a chance Hubbard could shut it down for more than two weeks if he were to skip out on the bowl game like Justice Hill a year ago.

The Edmonton, Alberta, Canada, native is eligible for the NFL Draft, and has reportedly requested a draft grade by the NFL to help determine where he could be drafted if he elected to forego his final two years of eligibility.

“I’m just kind of taking it day by day,” Hubbard said Saturday. “Obviously, that’ll be something we (family) talk about and stuff, but I’m not trying to focus too much on it – though, obviously I have to focus a little bit on it.”

Hubbard is currently ranked the sixth-best tailback in this class of draft eligible running backs. For comparison, the sixth running back taken off the board in the 2019 NFL Draft went late in the third round, and in the 2018 draft – which included current starting backs like Saquon Barkley, Nick Chubb, Ronald Jones II and Kerryon Johnson – the sixth tailback taken was Johnson, early in the second round.

In a four-round mock draft by Draft Wire released on Monday, the website projects Hubbard would go early in the fourth round to the Detroit Lions.

And of course, if he does elect to turn pro, Hubbard would have a chance to improve his draft stock as a likely invitee to the NFL Combine in February.