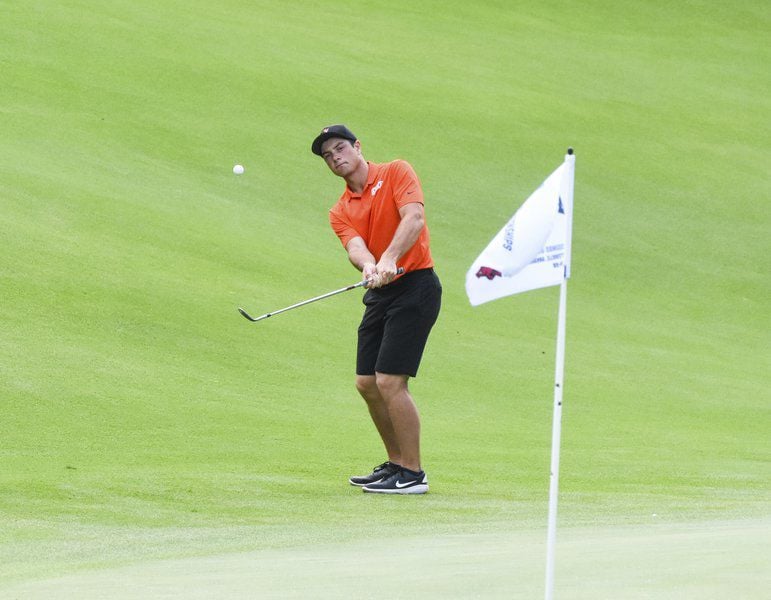 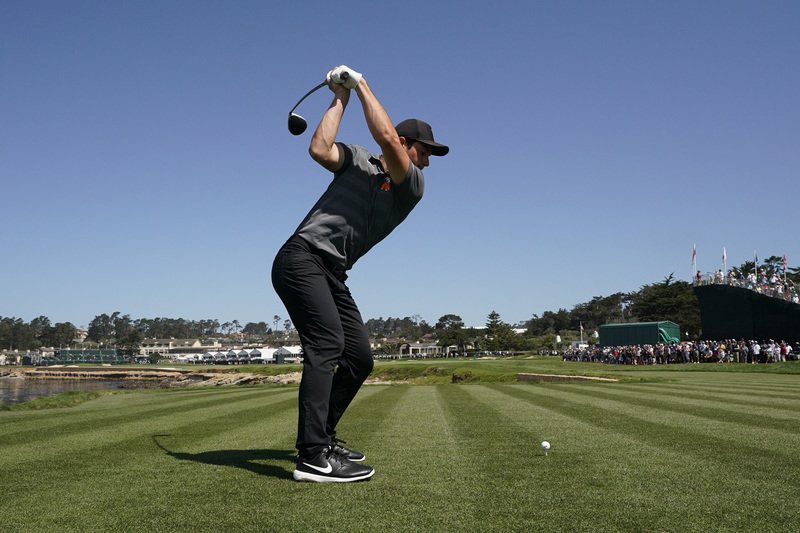 Associated Press Former Oklahoma State golfer Viktor Hovland, of Norway, hits his tee shot on the 18th hole during a practice round for the U.S. Open Championship golf tournament on Tuesday in in Pebble Beach, California. Hovland will be joining the PGA Tour next week.

Associated Press Former Oklahoma State golfer Viktor Hovland, of Norway, hits his tee shot on the 18th hole during a practice round for the U.S. Open Championship golf tournament on Tuesday in in Pebble Beach, California. Hovland will be joining the PGA Tour next week.

Viktor Hovland doesn’t know where his story is going.

He just closed the chapter on an illustrious college golf career at Oklahoma State and is playing his final tournament as an amateur this week before advancing his plot to the pro ranks.

So far in his career, he has had plenty of highs to build off of as the recently crowned Ben Hogan Award winner is set to being a new chapter, but he is uncertain of where his narrative arc will go now.

Hovland sat in front of national golf writers Monday at the Pebble Beach Golf Links in California, reflecting on the last time he was there and looking forward to this week’s U.S. Open.

Back in August, Hovland was fresh off winning a team national championship with the Cowboys and proceeded to dominate the Pebble Beach course on his way to winning the U.S. Amateur championship, earning him his spot in this week’s tournament.

That win opened a lot of doors for the Norway native, giving him some spots at PGA Tour events this spring while he was finishing up his junior season at OSU, as well as qualifiers into the Masters, the British Open and the U.S. Open.

“I don’t know where the story is leading to so it is hard to say what that week meant,” Hovland said. “Obviously, it has given me this opportunity and a lot of other opportunities that I felt like I’ve kind of gotten a lot out of and learned a lot and given myself a lot of opportunities that will rise in the future. It has been a very meaningful week for me.”

Hovland, who finished as the low amateur at Augusta, Georgia, earning the Silver Cup and a seat alongside Tiger Woods in Butler Cabin in April, will be once again rubbing shoulders with the sport’s elite this week.

The 21-year-old was put in a prestigious grouping with Brooks Koepka – the two-time defending U.S. Open champ who also won last month’s PGA Championship – and Francesco Molinari, the reigning British Open champ out of Italy.

Koepka, the No. 1 ranked golfer in the world is the odds-on favorite to win this week at 8-1. Molinari – who sits at No. 6 – is at 35-1. As the top-ranked amateur in the world for one more week, Hovland sits at 250-1 odds this week but as in the Masters, he feels that if he plays his best golf he has a chance to win.

“That will be fun, I actually got to play nine holes in the practice round at Augusta with Brooks so I was very impressed with his game and what he has done recently has been amazing,” Hovland said. “I think that was really cool to play with him on nine holes. That will make it a little easier for me going into the tournament. I have never met Francesco before, but from what it looks like on TV, he is like a machine and has obviously played unreal golf the last 12 months. It will be really cool to play with them and hopefully I can bring some birdies out.”

The last time an amateur won the U.S. Open was way back in 1933 when Johnny Goodman did it, so it has been a while, but Hovland is confident in his chances in his final weekend with the (a) next to his name.

He and sophomore Matthew Wolff announced last week that their Cowboy careers were over, leaving on the heels of an NCAA semifinal finish this year.

For his last amateur tourney, though, Hovland will have OSU coach Alan Bratton as his caddie one more time. Bratton was his caddy for the U.S. Amateur and the Masters.

“He sees me play golf every day,” Hovland said. “He knows how far I hit it and my tendencies and it is good to have someone on the bag like that. He will talk about the same things and you see the same things. He has played the tour for one year and his personality matches well with mine. I am very comfortable around him, whether that is on the course or off the course. I feel safe and comfortable and that was huge for me last year at the Am.”

A lot has changed at Pebble Beach since August and Hovland, always the cerebral type, knows he will have to play it differently to be successful this time. The USGA has been criticized in the past for perhaps making the course unplayable, like at Shinnecock Hills last summer, but with Pebble Beach hosting its sixth (first since 2010) there are hopes the conditions will be better.

“Definitely the rough is a lot thicker than it was last year and a lot of the fairways are narrower,” Hovland said. “… As of right now, the greens are pretty soft and on the slower side. At the Am, they were fairly firm and fast. I am assuming they will become that way later in the week. Not too worried.”

Despite winning the last tournament played on the prestigious course, Hovland knows that doesn’t give him an upper hand at all against the world’s finest.

“A lot of things are different,” Hovland said. “The atmosphere and tournament are different. It is still the same course and still have somewhat of the same lies off the tees and the greens still do the same and break the same ways. I think just a couple of things here and there, I missed it in the left bunker that you kind of learn. It is not a huge advantage that I played the US Amateur last year here. Everyone sees where the fairways are and where the greens are, you have just got to hit the shots.”

Following this week, Hovland will begin his pro career with a PGA Tour event at The Travelers Championship in Cromwell, Connecticut, alongside Wolff – the No. 2 ranked amateur and reigning Fred Haskins Award winner.

Hovland has made a choice on his caddie with Australian Shay Knight on the bag and the former Cowboy will be playing Tour events throughout the summer. The one caveat to turning pro for him was losing his exemption at The Open Championship at Royal Portrush in Northern Ireland.

“One of my biggest goals is to play the PGA Tour and the best possible way and the best possible chance was to turn pro after this week and do it that way,” Hovland said. “I can still qualify for the Open, but I obviously will make it harder for myself. Hopefully that will not be the only chance I have to play the British Open. It is a good problem to have, but you just have to make these decisions sometimes.”

It was a hard decision to make, but Hovland believes it is the best one for his path. Now, he will start the next phase of his career Thursday at a place he hopes is as kind to him as it was the last time he was there, giving his story another positive bookmark.

“It is obviously a special place for me as I had my biggest win in my career at this place, it is really cool to walk down some of the fairways and some of the greens to reminisce and think about the good times that I had last year,” Hovland said. “It is a new week and I try to kind of reset a little bit and play my game.”