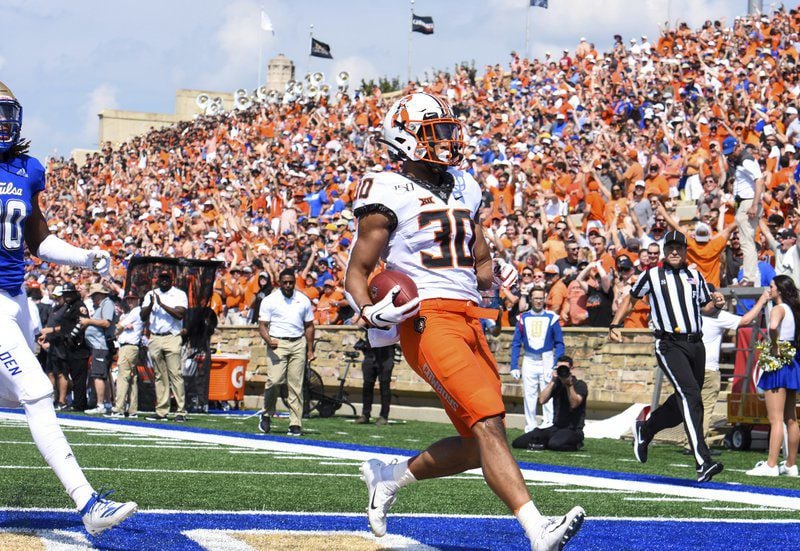 Oklahoma State running back Chuba Hubbard (30) is on pace for rushing over 2,000 yards this season, which would be the first time OSU has had a 2,000-yard tailback since Barry Sanders won the Heisman Trophy. 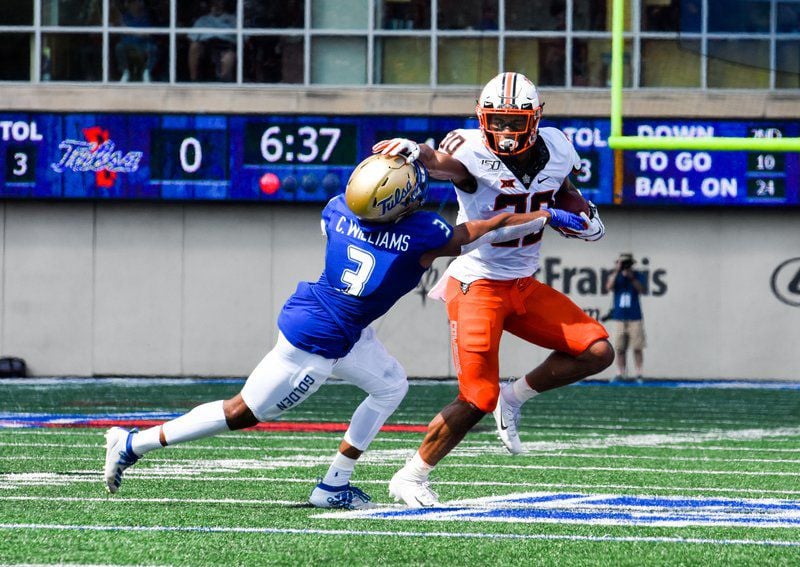 Photos by Jason Elmquist/Stillwater News Press Oklahoma State running back Chuba Hubbard stiff-arms a Tulsa defender during a non-conference game. Hubbard has been drawing a lot of attention with his running this season, and that was taken to a whole new level this week with Canadian-born hockey great Wayne Gretzky wishing Hubbard well at the midway point in the college football season.

Oklahoma State running back Chuba Hubbard (30) is on pace for rushing over 2,000 yards this season, which would be the first time OSU has had a 2,000-yard tailback since Barry Sanders won the Heisman Trophy.

Photos by Jason Elmquist/Stillwater News Press Oklahoma State running back Chuba Hubbard stiff-arms a Tulsa defender during a non-conference game. Hubbard has been drawing a lot of attention with his running this season, and that was taken to a whole new level this week with Canadian-born hockey great Wayne Gretzky wishing Hubbard well at the midway point in the college football season.

Chuba Hubbard has been afforded an opportunity in the United States many athletes dream about.

He’s slowly becoming one of the most recognizable running backs in college football thanks to the numbers he’s putting up for Oklahoma State.

Even while sitting at home Saturday working on classwork and taking in a couple of college football games on the television, the Edmonton, Alberta, native still stands atop the FBS in rushing yards – by more than 200 yards.

His 182.3 yard average per game has him on pace to rush for around 2,200 yards in the regular season, which would make him just the 32nd college football player to eclipse 2,000 yards rushing and just the second Cowboy to achieve the mark – the other being Barry Sanders’ Heisman Trophy-winning season that is still a record to this date.

But while this is all happening in the United States, he’s not forgetting his Canadian roots.

“I’m blessed to be able to represent Canada,” Hubbard said. “I always say Canada is the best country in the world, which may be bad being in America and saying that.

“But I’m blessed to be in this position and to have a lot of people in Canada – pretty much Canada as a whole – supporting me, so it’s an honor for me to represent them and try to do my best for them.”

This week, his star may have been elevated to a new level back home, transcending sports barriers.

Perhaps the most iconic Canadian-born athlete is joining in wishing Hubbard success on his season.

Wayne Gretzky, whose nickname is “The Great One” for being considered the greatest hockey player ever, won four Stanley Cup championships with the Edmonton Oilers and is now a partner and vice-chairman of the group that owns the Oilers. This week, through the Oilers’ official Twitter account, Gretzky had a message for the Cowboy running back.

“I just wanted to pass on a congratulations from everyone in Edmonton,” Gretzky said. “We’re all really proud of you. Keep going.”

Perhaps it shouldn’t be that big of a surprise of how successful he has been in his first chance to be the featured back in college in the United States.

While some recruiting websites might have missed on him coming out of high school in Canada – he was a considered a three-star prospect and ranked in the 300s, according to the 247Sports composite rankings – his highest ranking was No. 184 as a four-star by 247Sports. But he was drawing interest from some elite programs in the States.

Perhaps the most notable was Alabama, a program that has produced two Heisman Trophy winning running backs in the past 10 years and nine tailbacks who have been drafted in first three rounds over that same time period. The Tide offered Hubbard, along with Auburn, Georgia, Miami, Oklahoma, Tennessee and Texas A&M – to name just a few – and drew interest from Michigan and Southern California, though neither offered him a scholarship.

So now the rest of the college landscape is getting the chance to see why such programs gravitated to the Great White North to try to bring a running back in from Canada.

And just because he has been the top back in the country this year, he hasn’t been resting on his laurels.

Hubbard is one of the last Cowboys to leave the Sherman E. Smith Training Center after each practice. He typically spends an extra 30 minutes or so getting work in after most of his teammates and coaches have headed for the showers.

“I always run the jug machine after practice, I always try to get my hands better, and stuff like that,” said Hubbard, who has a manager stay a little longer to help him out. “… I just always want to get better each and every day.”

Hubbard hasn’t been utilized much in the passing game – having just five catches for 22 yards this season after finishing the 2018 season with 22 catches for 229 yards and two touchdown catches – but he’s still trying to improve that aspect of his game.

He spends the early portions of practices, when the special teams is getting work in, by joining Cowboy receivers coach Kasey Dunn and the receiving corps on the jug machine.

“He’s definitely better (than a year ago),” Dunn said before the season. “… He’s gone from being a guy who was nervous about catching a football, to now it’s, ‘I can’t wait to get it into my hands and do something with it on the perimeter!’

“For us, Chuba Hubbard on the perimeter is a win. Getting that guy in space is awesome. He’s definitely on the right track on working on his ball skills as much as he is.”

The Canadian Cowboy isn’t just working with coaching on staff to improve his game.

Hubbard is a sponge, trying to improve any way he can.

He still talks with former Cowboy running back Justice Hill, who is now at the NFL level, and takes in any advice from his predecessor – or anybody else who may have an opinion.

“If somebody wants to critique me, I’m all in for it. I mean, I’m not perfect.”

"If there’s a 5-year-old kid and he said my pass blocking was bad, then obviously my pass blocking is bad. So I’m someone that who won’t be like, ‘Oh, I’m too good to take something from someone.’ I’ll try to learn anything from anyone."