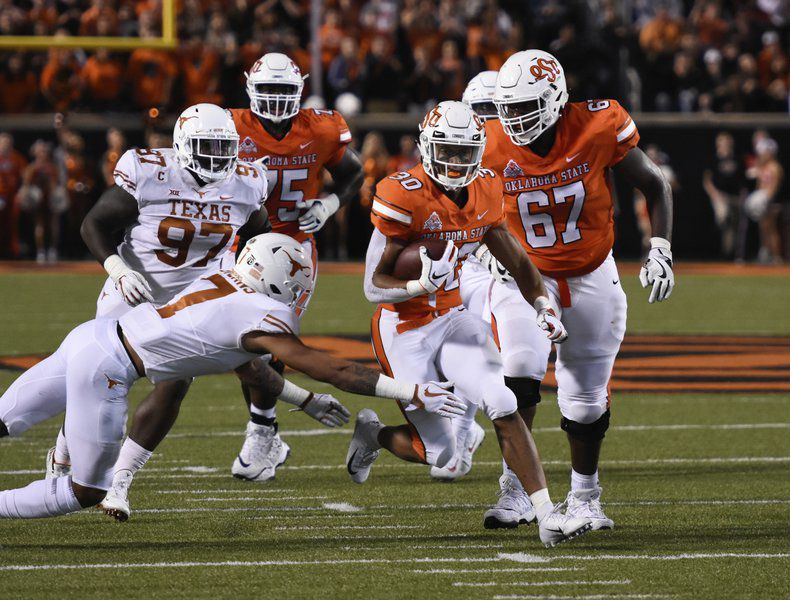 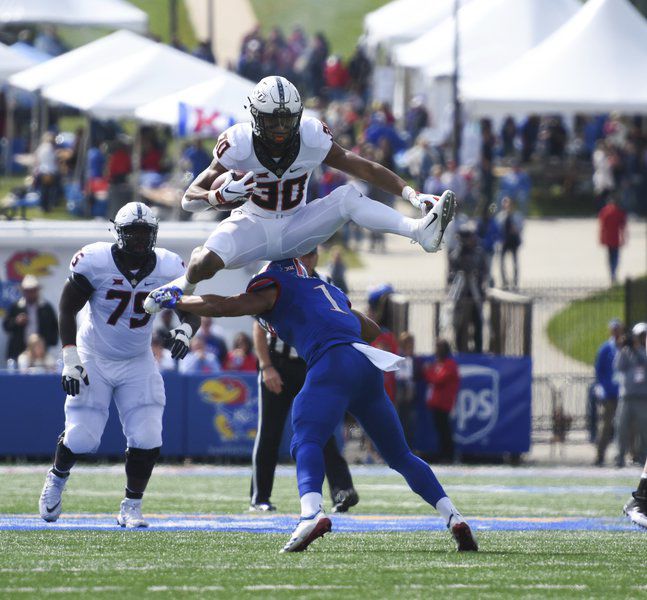 Photos by Jason Elmquist/Stillwater News Press Oklahoma State running back Chuba Hubbard jumped onto the scene during last year’s Kansas game. Now, he leads the country in rushing and faces a Jayhawks defense that is allowing over 230 yards rushing per game – which ranks 126th out of 130 FBS teams.

Photos by Jason Elmquist/Stillwater News Press Oklahoma State running back Chuba Hubbard jumped onto the scene during last year’s Kansas game. Now, he leads the country in rushing and faces a Jayhawks defense that is allowing over 230 yards rushing per game – which ranks 126th out of 130 FBS teams.

Chuba Hubbard faked a sprint to draw away defenders as he watched over to the sideline to see his quarterback flying through the air.

Spencer Sanders hurdled an Oregon State safety on a play last week and Hubbard, an experienced hurdler himself had to just stare in awe along with the rest of his team.

“I was like, ‘Damn.’ I just did my little run fake and looked over and saw him in the air I was like, ‘Hey bro, you might have to chill out with that. Be careful, you’re getting a little too high there. Watch out,” Hubbard joked.

Although it was only the first game, the Oklahoma State offense looked seamless as it transitioned back to coach Mike Gundy’s roots. Ever since Dana Holgerson and Todd Monken came along at the turn of the decade, the Cowboys have been an Air Raid, spread-them-out offense.

It has worked with consistently great wide receivers with Biletnikoff winners like Justin Blackmon and James Washington under the tutelage of associate head coach Kasey Dunn. Those offenses were also built around the strength of the quarterback, and despite some signal callers who were able to show off their running style such as J.W. Walsh and Taylor Cornelius, the air game has been the way to go.

But now, for the first time since the late 2000s, the Cowboys are building around a true dual-threat much like they did in the days of Zac Robinson. Of course, it wouldn’t be possible without the versatility of star running back Hubbard.

“Bringing a threat both ways, I feel like it is really hard to defend,’ Sanders said. “You have to defend a pass, you have to defend Chuba and not just the quarterback run. At Oklahoma State, I feel like we bring a big threat to a lot of defenses. As long as we keep working as a team as we did last week, we will be in great shape.”

For years, the Cowboys have had a reputation of developing great running backs, with the ‘Tailback U” moniker holding up with Barry Sanders and Thurman Thomas having attended OSU. However, since the air raid was installed, it has transitioned more to “Wide Receiver U.” That still is the case with Biletnikoff finalist Tylan Wallace still very much a big facet of this offense, but Gundy has showed a propensity to return to the days of yesteryear when it comes to the ground game.

Not only does having two dynamic players in Sanders and Hubbard make offensive coordinator Sean Gleeson switch it up a bit, but also the strength of the OSU offensive line under position coach Charlie Dickey. Against the Beavers, the Cowboys had the highest O-Line grade Gundy has seen in his time here since 2005.

“My early years here, once we figured out what we were doing, people didn’t really want to play us based on our physicality up front and our ability to hit you in the mouth and rush the football,” Gundy said. “We weren’t as flamboyant as we have been I the past six or eight years, but I want to get back to that. How we built this program in the early days and then to integrate throwing the ball down the field to find a happy medium based on our talent.”

Against the Beavers, the Cowboys achieved that with more than 300 yards rushing and 200 yards passing. It might not be as balanced as the 2007 OSU offense, where the Cowboys had 3,161 rushing yards and 3,161 passing yards, but Gundy is willing to let Sanders and Hubbard loose behind that big O-line.

Sanders, who doesn’t like flying, prefers to stay grounded. The same can be said for his offensive style.

While Sanders runs the offense, the straw that stirs the Cowboys’ drink is redshirt sophomore Hubbard. The Canadian might have a chance to be the best running back the Cowboys have put on the field in the Gundy era, even moreso than Kendall Hunter, Joseph Randle and Justice Hill.

Despite playing piecemail last season before taking over as Hill was dealing with injuries, Hubbard still almost finished with 1,000 yards rushing as he averaged 6 yards per carry and finished with nine touchdowns.

Currently, Hubbard leads the country in rushing yards with his 221-yard performance against the Beavers, even beating out prospective Heisman candidate Travis Etienne from Clemson.

What is scary about Hubbard is he says he is even more locked in than last year, and with an offense built around the run, then who knows how far he will run.

“I mean, ever since I got here, I would say that I am dialed in,” Hubbard said. “I came here for a reason. I didn’t move to another country just to have fun and go to college, I came here to change my life and change my family’s life. This year, I realized I was going to be in a bigger role and I can admit that. I kind of stepped back a little bit and fell behind what I usually do so this year, I said I wasn’t going to fall back. This is a year where big things could happen and my team needs me so I made sure I took care of the little things that last year I might have slipped up on.”

It helps him to have quarterback in Sanders who can take it himself or hand off to Hubbard as he utilizes the zone read. The dedication from the redshirt freshman in Sanders really spoke a lot to Hubbard and showed that he can be a leader in this offense.

Hubbard has big plans for himself. As a boy growing up in Sherwood Park, Alberta, he loved watching former Oklahoma star Adrian Peterson make plays for the Minnesota Vikings. The man fans call “All Day” was who Hubbard watched every day, hoping to one day play like him.

So far, he is doing a good job and while he didn’t follow in Peterson’s footsteps as a Sooner, he is becoming another star in the long line of Cowboys at “Tailback U.”

“I think we just have a great O-line and stuff so we can utilize that,” Hubbard said.

“Obviously we can pass the ball and we have great receivers and great QBs. To work on the run game, that is a big thing because if you can do both, then you’re unstoppable.”

For Hubbard, his work ethic comes from his desire to have his team succeed and to make his family proud. As the youngest of the family, with two brothers and a sister, he is looking to put the family name on the bright lights. With Gleeson and Gundy modeling this old offense around the run, he just might get there.

“I seen my mom work hard her whole life,” Hubbard said. “We have struggled and stuff throughout our lives. My brothers and sisters. I didn’t come here just for me. I came for them. They are a big part of why I came here. I just want to make them proud and be able to take care of them at the end of the day.”