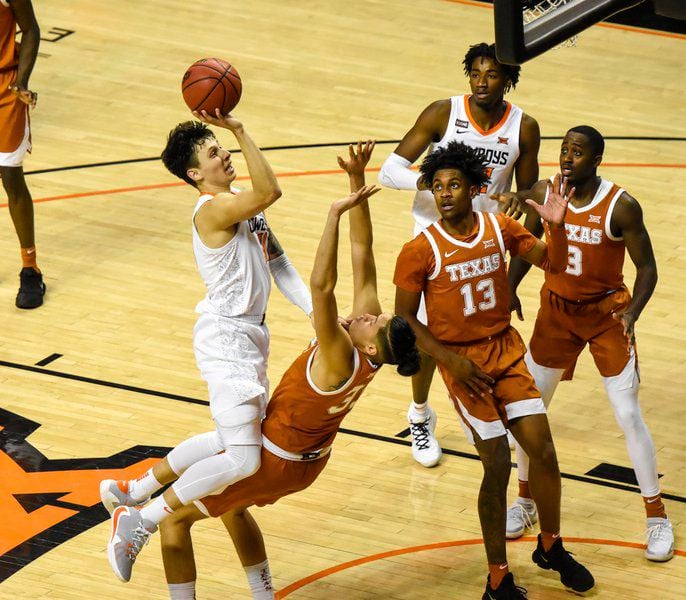 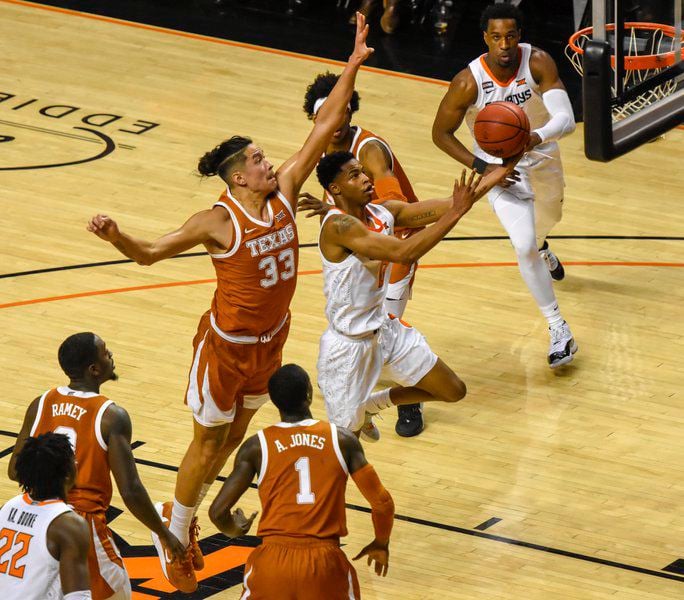 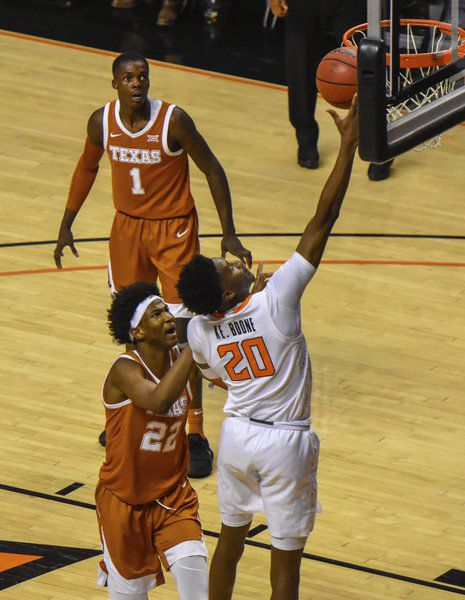 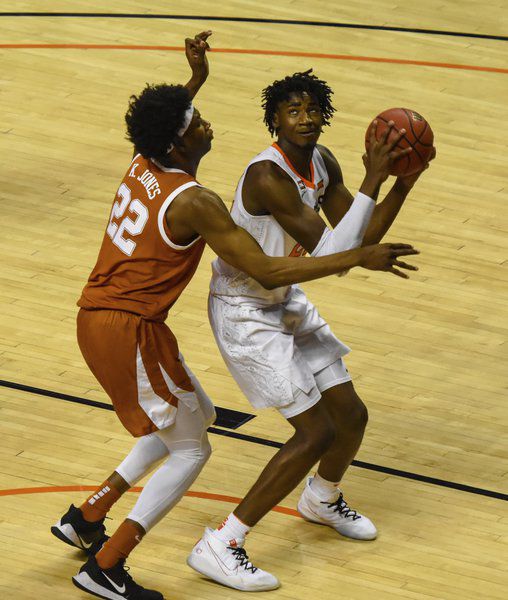 Oklahoma State freshman Kalib Boone goes up for a layup during Wednesday’s 76-64 loss to Texas. 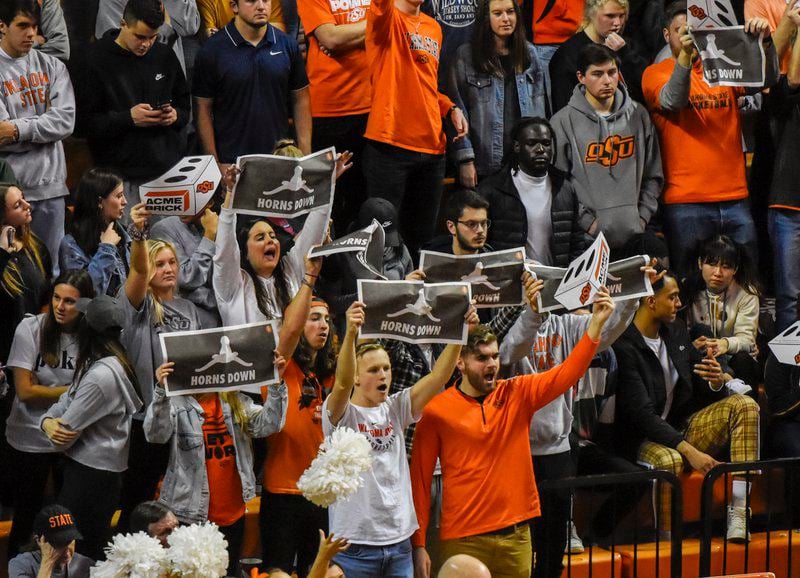 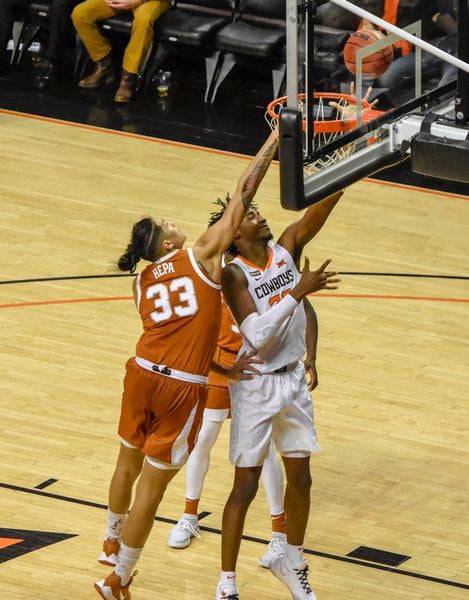 Oklahoma State freshman Kalib Boone goes up for a layup during Wednesday’s 76-64 loss to Texas.

On a night the offense woke from its slumber, the Oklahoma State defense gave up too many open shots from behind the arc.

The Cowboys shot better and scored their highest amount of the calendar year Wednesday night in Gallagher-Iba Arena, but the defense they’ve relied upon as of late broke down in yet another loss.

Texas answered a second-half OSU run with a pair of wide open, long-range shots. It was the story of the night for the visiting Longhorns, which won 76-64.

They handed OSU its fourth-straight Big 12 Conference loss of the season. The Cowboys surpassed their previous high of 51 points in a Big 12 game this year, but they allowed Texas to make 15 3-pointers on the night.

“Obviously, Texas shot the ball extremely well tonight,” OSU coach Mike Boynton said. “I want to give credit to them for executing their game plan. They hadn’t shot it particularly well all year, but they shot it better in their last game and it carried it over to today. It kind of shows how one game can change your mindset.

“They were 0-2, as well, but got off the schneid Saturday and carried that over to today. A lot of their 3s did come from communication breakdowns from us. We got some correctable errors there, so that’s encouraging.”

It was the most made 3-pointers Texas has made in a single game all season. The Longhorns had only shot better from 3-point range once, and that was a 14 of 25 performance in a win over Central Michigan.

“This is typical Big 12. Teams are really going at each other and there’s a lot of really good defense being played,” Texas coach Shaka Smart said. “Teams will shoot the ball better. Right now defense is a little bit ahead of offense. Whenever you’re playing at home or on the road, it’s not about beauty points, but it’s about firing away and trying to be one point better than the other team. There are teams in our league who are playing at a high level, and some who are figuring out. Any team in our league is capable of beating any team.”

Meanwhile, the Cowboys crawled out of their offensive hole and shot 40.3 percent (25 of 62) from the field, including 6 of 15 from 3-point range. It was the best team shooting performance since the nonconference finale against Southeastern Louisiana, which was the last OSU victory.

However, OSU made only 8 of 15 from the free-throw stripe. Texas made 7 of 9 from the foul line.

The majority of the Cowboys’ first-half offense came from the freshmen off the bench. The starters scored only eight of 25 points in the first 25 minutes.

In the second half, starters Isaac Likekele, Cameron McGriff and Lindy Waters picked up their offense and each of them nearly scored in double figures. They were a combined 9 of 28 from the field for the game.

Freshman Kalib Boone led OSU with 12 points on 5 of 10 shooting. He also led the team with seven rebounds. His twin brother, Keylan, added seven points on 3 of 5 shooting, in addition to five boards.

“I felt great,” Kalib Boone said. “I have leaders like Thomas over here, Lindy and Cam that have been through the fire. I’ve got Yor (Anei) that tells me, ‘We need you. You just need to bring that spark.’ … Every time I get out there, I feel like I need to be a presence for the post, and today’s that’s how I felt.”

Texas led by 17 with 13 minutes left in the game, but OSU fought back and fired up the home crowd that was anxiously waited for a spark. The Cowboys went on a 12-1 run after falling behind by 17.

It began with a Likekele layup, a Waters free throw and 3-pointer and another Likekele layup. Kalib Boone scored the next four points, trimming the lead to six points midway through the half.

Both teams battled for the next five minutes, and a Waters 3-pointer once again cut the lead to six points. Texas answered with a pair of wide open 3s, that sent fans to the exits with less than four minutes left in the game.

“Our communication as a team wasn’t that good,” Dziagwa said. “They ran a lot of ball screens – that’s how their offense runs – and we didn’t communicate as well. They got some open looks, and when they got open looks, they made them.”

The Cowboys will try to earn their first Big 12 win at 11 a.m. Saturday when the top team in the conference in Baylor comes to town. The Bears beat Iowa State, 68-55, at home Wednesday.