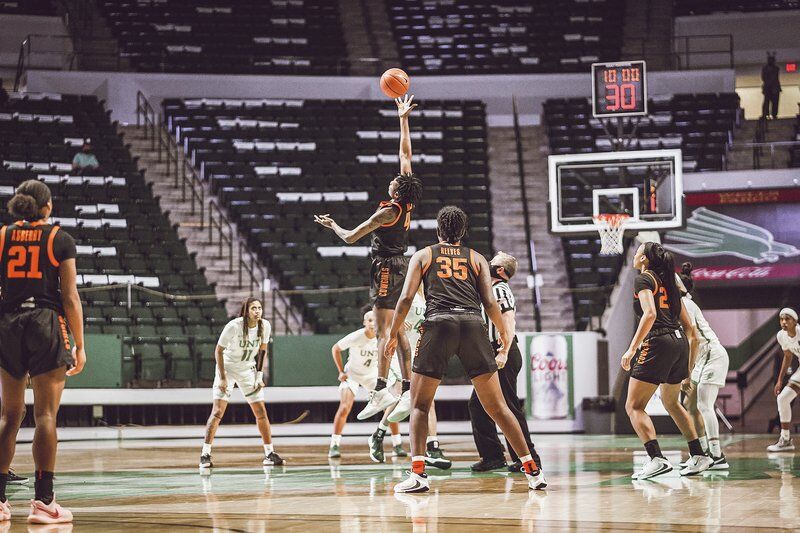 Photos by Chloe Hatfield/OSU Athletics  Oklahoma State women’s basketball forward Natasha Mack wins the tip Tuesday night at North Texas. Mack scored a career high 31 points in the Cowgirls’ 82-68 victory. It was their third-straight win and they will be off until Jan. 2. 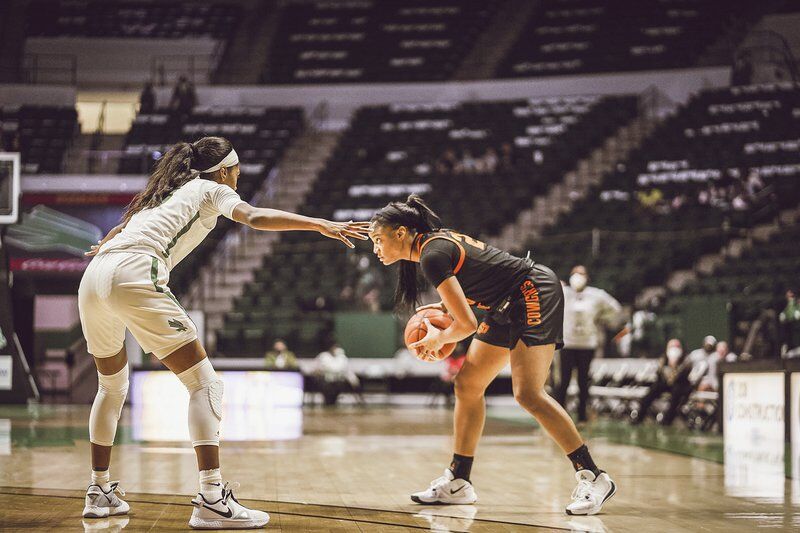 Photos by Chloe Hatfield/OSU Athletics  Oklahoma State women’s basketball forward Natasha Mack wins the tip Tuesday night at North Texas. Mack scored a career high 31 points in the Cowgirls’ 82-68 victory. It was their third-straight win and they will be off until Jan. 2.

The Oklahoma State senior forward led the Cowgirls to a third-straight victory to end the calendar year. They beat North Texas on the road, 82-68, to end their nonconference slate of games before hosting Texas Tech on Jan. 2.

The 6-foot-4 Mack scored 18 points in the first half as the Cowgirls built a seven-point lead at the break. After a quiet third quarter, the Lufkin, Texas, native dominated the fourth quarter and helped the Cowgirls pull away for the victory.

Mack finished the game leading all players with 31 points and 14 rebounds, recording her third double-double of the season. No other Cowgirl grabbed more than three rebounds in the game.

The 31 points were one point more than her previous career high of 30 points in which she scored at Texas Tech last season.

Her previous season high was 22 points against Alabama on Dec. 5. It was the only game this season in which Mack had surpassed the 20-point mark.

Mack wasn’t the only Cowgirl forward to score in double figures at North Texas. Junior Kassidy De Lapp added 11 points off the bench on 5 of 5 shooting. Sophomore guard Lauren Fields also scored 11 points in the victory.

Reigning Big 12 Conference Freshman of the Week Lexy Keys added only eights points on just 1 of 6 shooting. However, Keys was 6 for 6 at the foul line.

North Texas led early in the game and took a 23-17 lead after the first quarter. OSU took over before halftime by winning the second quarter, 21-8.

OSU was 1 of 2 from 3-point range in the second half, to shoot just 22 percent from long range for the night. The Cowgirls scored 46 points in the paint.

OSU will next play at 6:30 p.m. Jan. 2 when Texas Tech comes to town. Two former Cowgirls who transferred in the offseason play for the Red Raiders. Vivian Gray, who led OSU in scoring the past two seasons, and Bryn Gerlich now play for Gerlich’s mother, Krista, who took over the Tech coaching job in the offseason.