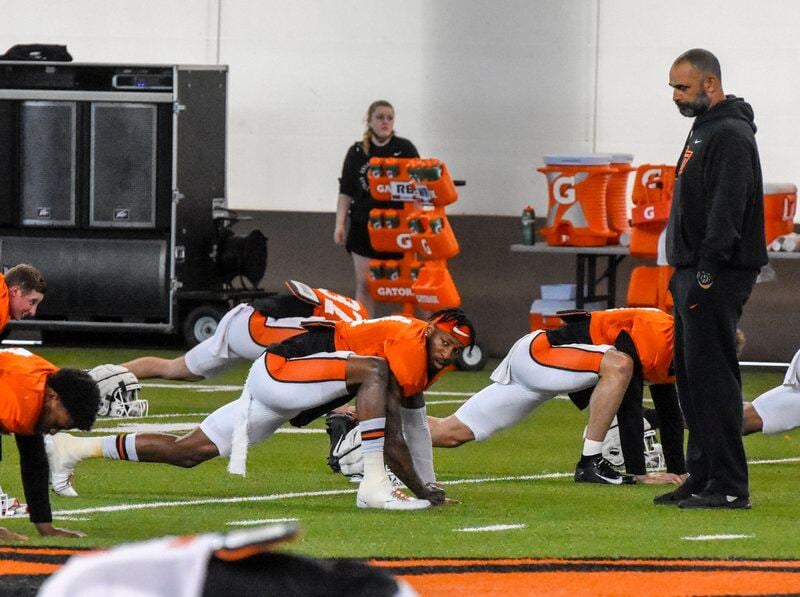 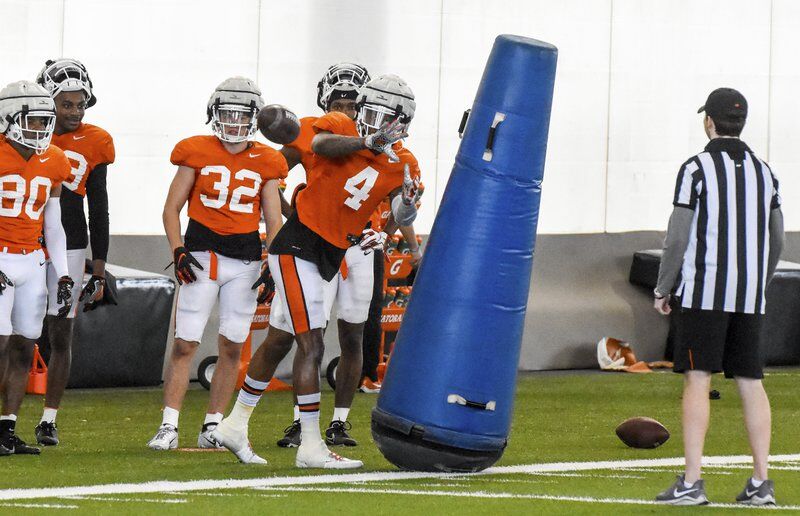 The Z position in the Oklahoma State wide receiver corps has been pivotal – and lucrative – over the past 10 years.

With Tylan Wallace turning pro – joining the lineage of Justin Blackmon and James Washington as NFL draft picks out of Stillwater – the mantle lays vacant.

But offensive coordinator Kasey Dunn, OSU’s receiver coach for the better part of the past decade, already has his sights on who could be Wallace’s successor.

It’s not one of the highly-recruited young receivers he brought him and has molded, like he did with Washington and Wallace.

Dunn envisions Washington State transfer Tay Martin as a contender to fill the gap at the Z position.

“Tay Martin is up there, the transfer from Washington State,” Dunn said. “He played last year, but is certainly improving, and putting himself in a position to play that position.

“Langston Anderson is another one, and then we have two young guys that I think will be good – that’s Blaine and Bryson Greene. The Greene twins have shown up right away.”

Martin arrived in Stillwater during fall camp with some expectations due to the numbers and role he played in the high-powered offensive of Mike Leach.

During his three years with the Cougars, he hauled in 143 catches for 1,615 yards and 18 touchdowns. In his sophomore campaign, he had 69 catches for 685 yards and eight scores for his most productive season.

However, there was a different reality for Martin when he arrived at OSU.

Not only was he behind a healthy Wallace playing his final season at Oklahoma State, but he wasn’t properly ready to take on a role in the Oklahoma State offense, according to Cowboy coach Mike Gundy.

“When he came in, he transferred in, we had COVID, we didn't have structured workouts, we all struggled, the team struggled, guys that hadn't been in this organization really struggled,” Gundy said. “... It’s difficult to get in shape during the season because we can't push them except one day a week when you're getting ready to play.”

Martin had minimal work until the Cheez-It Bowl against Miami.

Playing in seven regular season games, the Houma, Louisiana, native had a combined nine catches for 76 yards, with his best outing being a three-catch, 28-yard outing against Baylor.

He reached those combined numbers against the Hurricanes with six catches for 73 yards. He is, however, still looking for his first touchdown as a Cowboy.

Despite the limited work last season, NFL Draft experts pegged the former Cougars receiver as a potential late-round pick. Before all the final decisions were made on returning or leaving, ESPN ranked Martin's NFL prospects ahead of Dillon Stoner – who elected to forego the extra year of eligibility.

“Tay is in shape right now, in my opinion, for the first time since he arrived here. So, how good can he be? I don't know because he's never been in shape,” Gundy said. “He was pretty good in the bowl game and he was out of shape. ... I'm excited about him. If he'll stay focused and compete, which he has, now that he's in shape, he should make a lot of plays.”

Despite being the program for just one year, he's veteran presence has resulted in him being at the head of one of the receiver lines for stretches during spring practice – a spot that is typically reserved for starters.

During Tuesday's practice, another element was added to the potential use of Martin.

While the team was spread out in the indoor space of the Sherman E. Smith Training Center to work on aspects of special teams units, Martin was working with sophomore receiver Brennan Presley on fielding balls from the jug machine – and eventually pooch punts directly from junior punter Tom Hutton.