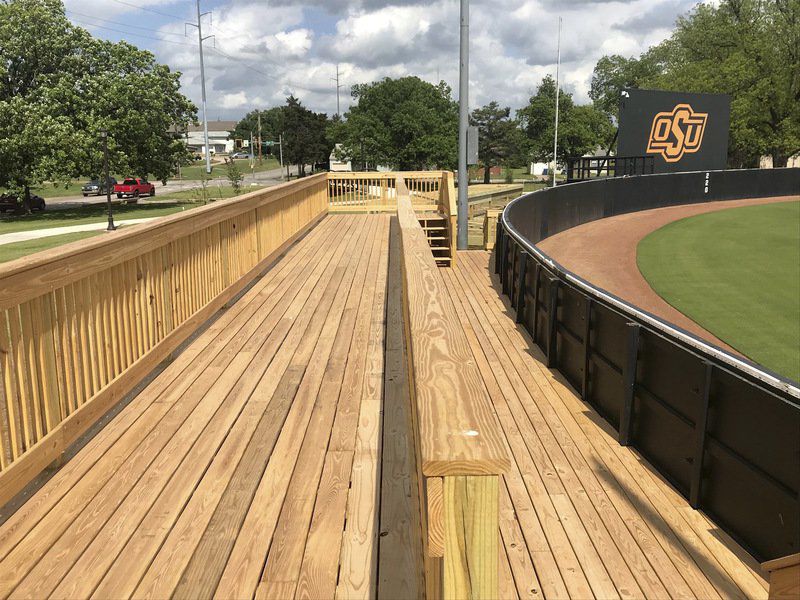 Jimmy Gillispie/Stillwater News Press This two-level, wooden deck outside the left field wall at Cowgirl Stadium would likely be full this weekend with the Oklahoma State softball team hosting an NCAA Regional. The deck was recently finished, but will have to wait until next year to be used by OSU fans. 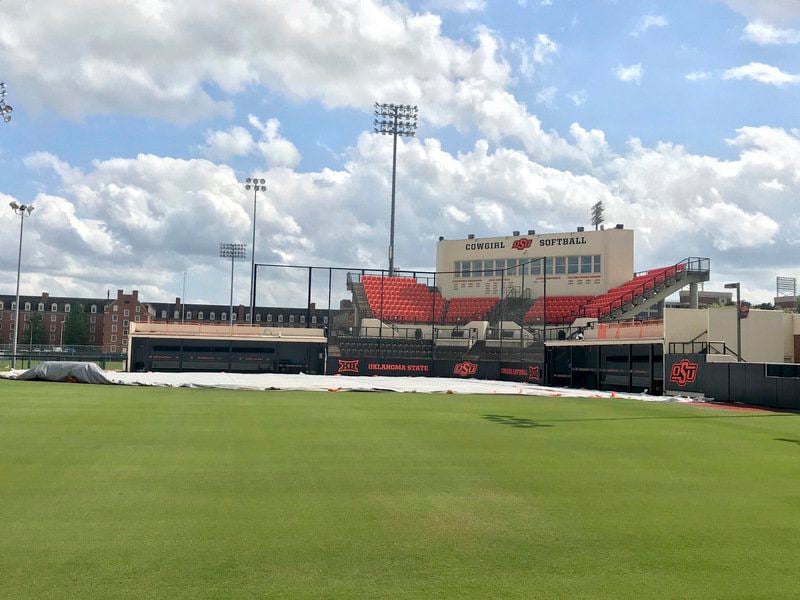 Jimmy Gillispie/Stillwater News Press Cowgirl Stadium would likely be full this weekend with the Oklahoma State softball team hosting an NCAA Regional. It was packed last year when the Cowgirls locked up a berth to the Women's College World Series.

Jimmy Gillispie/Stillwater News Press This two-level, wooden deck outside the left field wall at Cowgirl Stadium would likely be full this weekend with the Oklahoma State softball team hosting an NCAA Regional. The deck was recently finished, but will have to wait until next year to be used by OSU fans.

Jimmy Gillispie/Stillwater News Press Cowgirl Stadium would likely be full this weekend with the Oklahoma State softball team hosting an NCAA Regional. It was packed last year when the Cowgirls locked up a berth to the Women's College World Series.

Close your eyes. Picture this scene.

You’re standing on the newly built two-level, wooden deck at Cowgirl Stadium, enjoying your view from beyond left field. The Oklahoma State softball team is hosting another regional where the stadium is packed.

Fans, including yourself, have overflowed into the outfield deck, joining OSU softball superfans The Social and the OKState Softball Outlawz where the entertainment is endless during games.

No more trucks backed up to the outfield wall. The new deck looks great and is filled with fans cheering for their top-10 ranked Cowgirls. They’re primed to make a run at the Women’s College World Series for the second-straight year.

The noise and cheers from Cowgirl Stadium can be heard just west about two blocks at the Michael and Anne Greenwood Tennis Center, where the OSU women’s tennis fans would once again be making opposing teams frustrated with their boisterous and “loud” cheers.

Too loud for some tennis fans, unfortunately. Yet, it was one of the biggest reasons why the 2016 NCAA Tennis Championships in Tulsa were so successful. OSU faithful proved why some noise should be allowed in all sports.

This time, they’re doing it on their home turf. They’ve packed the Greenwood Tennis Center to cheer on their young Cowgirl squad that’s full of talent and possibly even more potential for the next couple years, if not longer.

The tension is palpable at both venues. OSU fans are anxiously awaiting the moment to yell and scream for a win and continued life in the postseason. It’s an easy scene to picture with the way both programs were heading two months ago.

Cautiously look around, afraid of what you might see.

Both venues are empty. Athletes went home weeks ago. People are walking around with masks and face coverings, but Halloween is more than five months away.

It’s a sad scene to picture. May was supposed to be an incredibly busy month in Stillwater with OSU baseball at O’Brate Stadium, OSU softball becoming a national powerhouse, OSU tennis hosting its first-ever NCAA Championship, Stillwater High sports winding down and Special Olympics Oklahoma making thousands of people smile and cry tears of joy.

All gone. Not even a goodbye.

Let’s hope it’s just a 2020 thing. Let’s hope this isn’t the normal vision of the future.

We need sports. Whether it’s because you enjoy sitting at the ballpark on a warm spring night or you enjoy the thrill of competition or maybe you have a tremendous sense of pride for your school, sports help many of us get through this difficult thing we call life.

It was brutal seeing March Madness get canceled, but now that sadness has spread to May and the foreseeable future. It’s a bleak picture to paint.

OSU baseball should be playing in the Big 12 Conference Tournament in Oklahoma City next week. The Cowboys are the defending champs and have won the event twice in the past three years.

It’s been a rite of passage for this writer to travel to Chickasaw Bricktown Ballpark several days in a row since 2015. It’s become a pastime during my days in Stillwater.

Some days – and games – were long, but enjoyable. The 2017 championship run by the Cowboys was quite memorable. Heck, Carson Teel might still have bruises from being on the bottom of that dogpile.

Now, we just wait for college and high school sports to return. Hopefully, it’s this fall. Stillwater High football has become another rite of passage, and there’s too much talent returning for the Pioneers to never have a season.

Another tragedy could be OSU losing its second NCAA Championship in less than eight months.

The NCAA Cross Country Championships are scheduled to be held in Stillwater this fall. This former runner can’t wait to be there.

Let’s hope we have a fall sports season. We need some positive thinking during this difficult time. Happy thoughts, everyone.