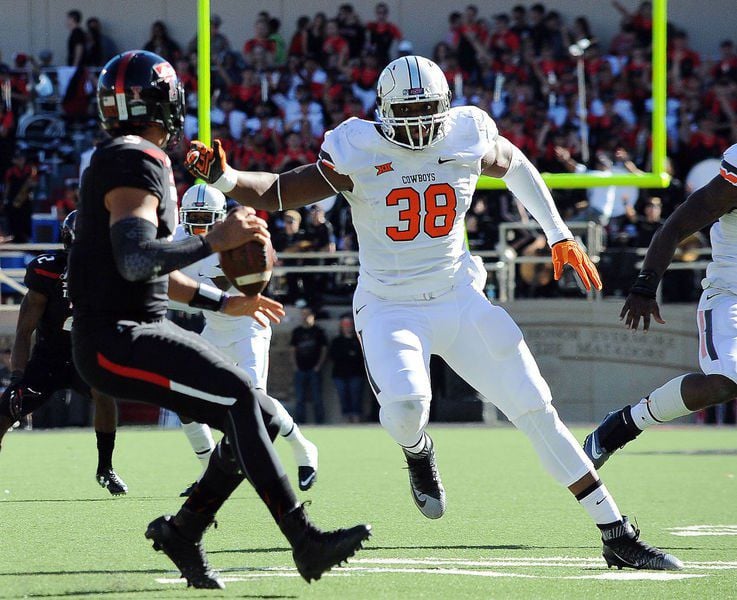 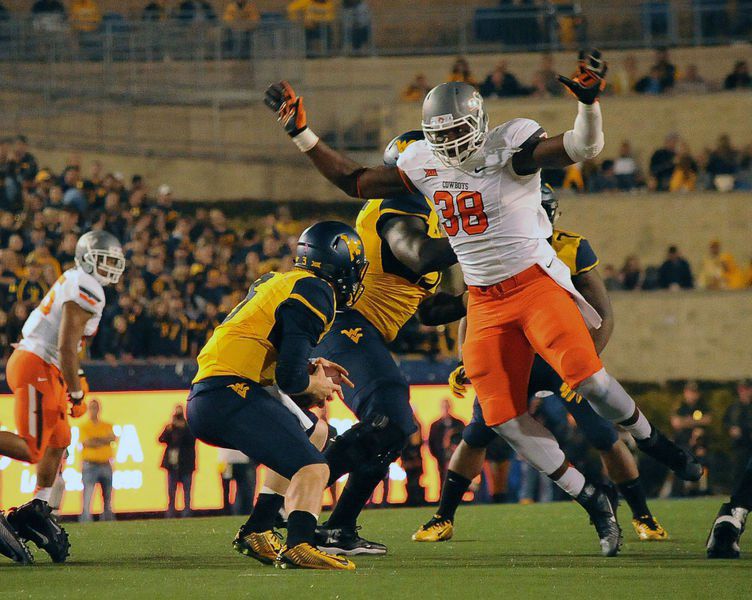 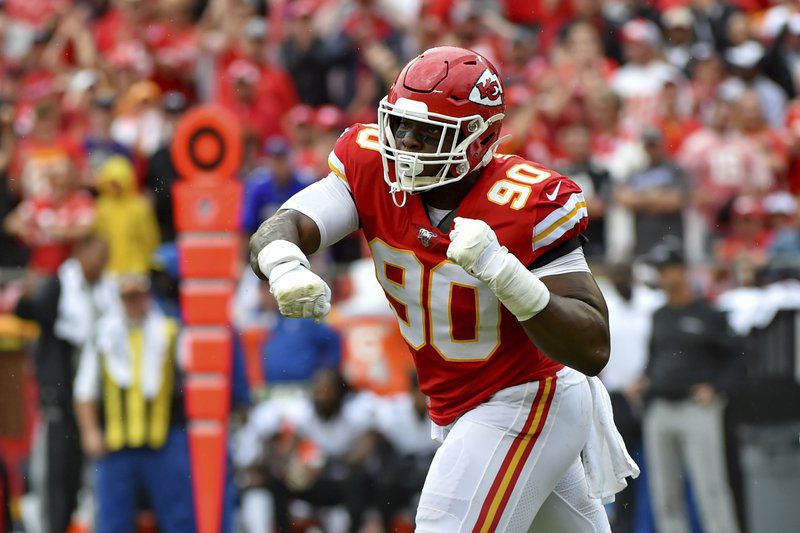 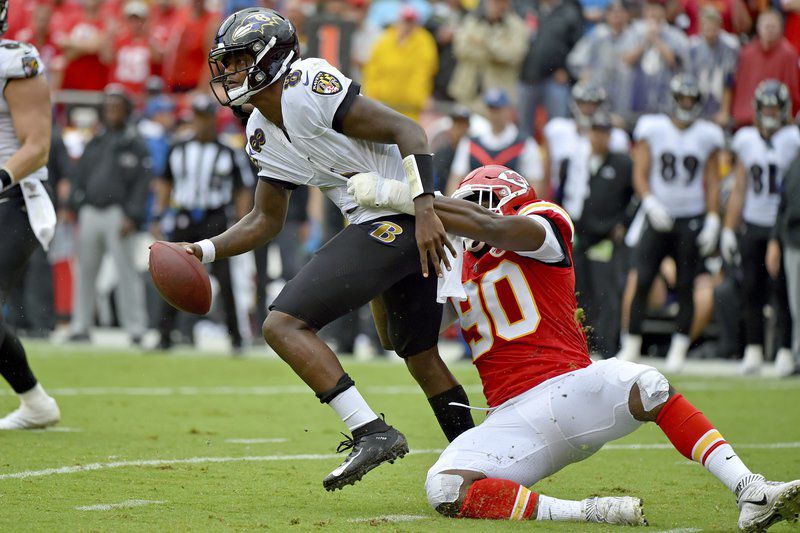 Professional sports can be a bear for its athletes.

The wheeling and dealing of a business built around entertaining and winning. And when an athlete gets caught up in the ever-changing landscape via trades, it can take a toll.

But for former Oklahoma State defensive end Emmanuel Ogbah, when the trade machine swallowed him up, it meant a new lease on his young career.

A second-round pick of the Cleveland Browns in the 2016 NFL Draft, Ogbah had seen little success – both personally and in the win column – in Cleveland. This offseason, though, it changed.

He went from a team that had won just eight games in his three-year career, to a franchise that won 12 games last year and was an overtime away from a trip to the Super Bowl. The Kansas City Chiefs, desperate to improve one of the worst defenses in the league in 2018, zeroed in on Ogbah as one of the new pieces for new defensive coordinator Steve Spagnuolo – trading away safety Eric Murray, who has one pass deflection, one tackle for a loss and eight tackles in three games with the Browns, for the former Cowboy.

“It was definitely exciting for me to get that opportunity,” Ogbah said recently in an exclusive phone interview with The News Press. “I’m just blessed, and happy to get to be a part of this organization moving forward.”

Ogbah’s best season to date was his rookie campaign in Cleveland, in which he had 5.5 sacks and 53 tackles – though he was used more as a linebacker by the Browns. His sophomore season, in which he was moved back to defensive end, was trending toward being even better than his first until an ankle injury brought an end to his year after 10 games – finishing with four sacks, 29 tackles and six pass deflections before missing the final six games of the season.

Last year, he would miss yet another two games due to injury and finish his final year with the Browns with 40 tackles, including three sacks, and a career-high eight pass deflections.

“It’s definitely been frustrating, but that’s football – injuries happen,” said Ogbah, who also was sidelined during training camp in August due to an oblique strain. “You’ve got to be prepared, take care of your body better. That’s one thing I’ve learned, I’ve got to stay on top of it and take care of my body better to last a long time.”

The move to Kansas City came with a lot of change.

Beyond moving to a new city, playing for a new franchise and learning a new defensive scheme, the Chiefs have asked Ogbah to be able to line up through the defensive front to help complement defensive end Frank Clark – another trade by the Chiefs from the Seattle Seahawks – and defensive tackle Chris Jones, who finished third in the league last year with 15.5 sacks.

“I’ve been playing all along the defensive line. I’m versatile for this defense, that’s one of the things they liked when they brought me,” Ogbah said.

Helping make the transition a little smoother for the former Houston native was one of the players on that defensive line.

Jones and Ogbah had actually been training partners in the offseason. Jones was so excited about the news of Ogbah’s trade that he tweeted out “My brother brother. Let’s gooooooo!!! We just had this conversation…”

“It was a big deal for me, because me and Chris train together in Miami,” Ogbah said. “So we are kind of used to each other, and I kind of knew how his energy is.”

Through his first three games in Kansas City, Ogbah leads the defense in sacks with 2.5, and leads the team in tackles for a loss (3.5) – despite being a backup on the depth chart.

In his first game in a Chiefs uniform, a road game at Jacksonville, he ended up being the only Kansas City player to record a sack in the season opener.

“That felt good for me, because I know what I’m capable of,” Ogbah said. “When I’m in there, I just try my best to make plays for my team and do the best that I can while I’m in there.”

And that’s what he’s steadily been doing each week – making plays.

Against the rival Oaklan Raiders in Week 2, Ogbah forced a fumble in the final two minutes of the first half – stunting the Raiders from trying to put together a potential scoring drive before halftime when Kansas City was leading 21-10. Ultimately, the Raiders were forced to punt and set up the Chiefs for another quick touchdown right before the break.

Ogbah saw a sharp increase in action in this past week’s game against the Baltimore Ravens, and he took advantage of the opportunity. Getting on the field in 45 percent of the defensive plays, Ogbah recorded 1.5 sacks, a quarterback hurry (which led to an incomplete pass) and a pass deflection on a third-down play.

Prior to the marquee matchup with the Ravens and rising star quarterback Lamar Jackson, Ogbah had played in 35 percent of the defensive snaps in the first two games against Jacksonville and Oakland – both were lopsided victories for the Chiefs.

“That’s something that I count on, just going out there – no matter how many snaps I get, I’ve just got to go out there and make a play or two just to give my team the best chance to win the game,” Ogbah said in the interview, which took place prior to the Ravens game. “That’s all my mindset.”

Once a Cowboy, always a Cowboy

While he’s focused on a making plays for a Super Bowl contending team, Ogbah also views his performance at the next level as a direct reflection of his time at Oklahoma State.

Ogbah had one of the most decorated careers for a defensive lineman at Oklahoma State during his three-year playing career.

As a redshirt sophomore in 2014, he became the first Cowboy to be recognized as the Big 12 Conference defensive lineman of the year – as voted on by league coaches. That same season, he set an OSU single-game record with 5.5 tackles for a loss in Oklahoma State’s win over Kansas.

“I loved my time at Oklahoma State and if I can help get players there, I do the best that I can, too,” Ogbah said.

He’s even made a point to keep an eye on the current Cowboy program.

Even though he’s a defensive player, he’s been drawn to the Oklahoma State offense – and a couple of players in particular.

“I get to watch some games when I’m not on the plane, but they’ve been holding it down,” Ogbah said. “Tylan Wallace been balling, Chuba Hubbard been balling. I’m excited for those guys. I can’t wait to get to Stillwater to watch those guys some time this year.”

“He’s doing his thing. We have a legit duel-threat quarterback now, so he’s running and passing,” the Chiefs’ defensive lineman said. “He’s doing his thing out there. I haven’t really studied him much, but I’ve seen the highlights of him doing work. Just glad they got a quarterback. He reminds me a little bit of J.W. – just a younger version.”

Ogbah still keeps in touch with his former Cowboy teammates, especially the ones that are playing in the NFL, as well.

He said he talks to Vincent Taylor – who is now on the practice squad with the Buffalo Bills – “almost every day” and still is in touch with Tre Flowers, who is a starting cornerback for the Seattle Seahawks.

But he doesn’t have to go far to talk with one former college teammate.

While some fans may distance Tyreek Hill’s time at Oklahoma State due to how it ended, Ogbah has enjoyed being on the same team as the former Cowboy – and former University of West Alabama – receiver, who recently signed a contract extension with the Chiefs after a tumultuous offseason.

“That’s my dog. We’ve always got memories (from Oklahoma State),” Ogbah said. “We always talk. I know stuff happened, and it was an unfortunate incident that happened. But we’re still boys, we always talk and reminisce on good times and stuff.”

Ogbah and Hill are just two of eight Chiefs players with Big 12 Conference ties. Included on the roster are three former Oklahoma Sooners, of who Ogbah said they talk some trash with each other time to time.

Obviously the most notable of those former Big 12 players on roster is quarterback Patrick Mahomes, who impressed the Texas Tech staff enough to play him over Baker Mayfield – which was Ogbah’s quarterback last year in Cleveland. Mahomes, whom Ogbah sacked once in each of the two games they faced off in college, was the NFL MVP last year.

“It’s definitely big. I know they harp on the Big 12 not having any defense, but we’ve got a lot of defensive guys in the NFL,” Ogbah said. “Going against Mahomes at practice, after having gone against him in college, you kind of see the things he does and it’s a blessing to have him on my side this time. Having some great Big 12 players in the league, says a big thing about the Big 12 Conference – that we do produce players, and we do have a lot of good players in the NFL.”

Keeping up with family

Oklahoma State’s starting linebacker Amen Ogbongbemiga, a redshirt junior from Canada, is a distant relative of Ogbah’s as they both were born in Nigeria – though the pair aren’t entirely sure how the connection works.

Through four games, Ogbongbemiga is second on the team in total tackles with 36, but leads the Cowboy defense in solo tackles with 23. He’s also the team-leader in tackles for a loss (6) and sacks (3.5).

“I’ve been keeping up with Amen, too. He’s been balling,” Ogbah said. “He’s just got to keep doing his thing. I talk to him here and there.”

Ogbah played a big role in Oklahoma State landing who is now one of the undisputed leaders of the Cowboy defense.

Ogbongbemiga committed to the Cowboys during Ogbah’s final year in Stillwater, and has grown to be just as impactful a player as his older cousin.

“It made a very big impact. I knew him when he was younger, and to see him develop like that as a player and a person here (at Oklahoma State), it kind of attracted me,” Ogbongbemiga said. “He was like 225 pounds coming out of high school, and for him to grow that much in a short span of time and develop that much as a player, his time here influenced me. We had a great relationship growing up and I’m glad I got here.”

The two still keep in constant contact, with Ogbongbemiga having a vested interest in Ogbah – especially now that he’s playing for an NFL team four hours away from Stillwater. He’s hopeful to get to go one of the Chiefs’ home games to watch his relative at the professional level.

And when he saw Ogbah get the only sack for Kansas City in his Chiefs debut, Ogbongbemiga was quick to reach out.

“I saw that and I messaged him about it,” Ogbongbemiga said. “I congratulated him and told him to just keep working. It’s nice to see guys I know do well.”