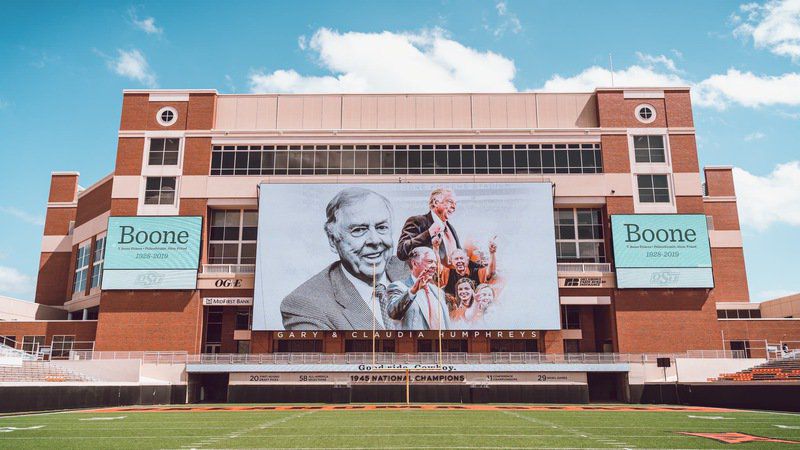 Twitter (@CoachGundy) The large video board in Boone Pickens Stadium has a tribute to Pickens, who passed away Wednesday. 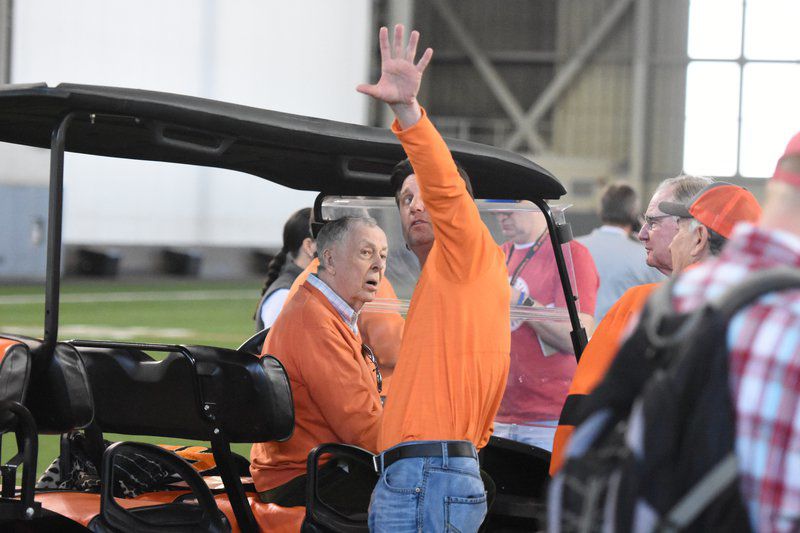 Twitter (@CoachGundy) The large video board in Boone Pickens Stadium has a tribute to Pickens, who passed away Wednesday.

The news of T. Boone Pickens’ passing Wednesday afternoon brought about a lot of reaction from the Oklahoma State athletic community, expressing their thoughts on one of the most influential figures in creating an athletic village on the campus.

While Pickens and Cowboy football coach Mike Gundy had times of conflict over the years, they also understood the importance of one another to the success of the football program – with Pickens changing the physical landscape with Boone Pickens Stadium and Gundy changing the cultural landscape.

“Mr. Pickens is a big part of our success, and we’re all thankful for the lasting impact he’s had on Oklahoma State,” Gundy tweeted out after the news. “It would have been difficult for us to climb as high as we have without him. He’ll be missed, but his legacy here will live on for a long time to come.”

The usual mediator between the two was OSU athletic director Mike Holder, who was influential in getting Pickens to buy into the vision of an illustrious athletic department at OSU.

Holder’s connection with Pickens blossomed during the building of Karsten Creek – where Pickens’ childhood home is being re-constructed near the No. 10 tee box and is expected to be his final resting place – before Pickens jumped headfirst into it with the creation of Boone Pickens Stadium.

“The greatest Cowboy of them all has taken his last ride. It will never be the same again,” Holder said in a release. “We could never thank him enough for all that he did for our university. He gave us everything he had and all that he asked in return was that we play by the rules and ream big.

“He was living proof that anything is possible if you’re wearing orange. ‘Great ride Cowboy, great ride!’”

According to a report by OSU alumnus Brett McMurphy, it was stated the Oklahoma State football team will wear a helmet decal paying tribute to Pickens for the remainder of the season. OSU’s next two games will be on the road – Saturday at Tulsa, and at Texas on Sept. 21 – before the Cowboys return to the stadium that bears Pickens’ name on Sept. 28 to host Kansas State.

Former Cowboy center Brad Lundblade, who is on the practice squad with the Carolina Panthers, tweeted, “Thank you for everything, Mr. Pickens. Rest In Peace.”

Tyler Patmon, who played just one year at Oklahoma State after transferring from Kansas and has signed with six NFL teams and is currently a practice squad member for the Miami Dolphins, tweeted out, “Rest Easy. Your charitable donations did not go unnoticed! You helped a lot of people on this earth!”

One of the most influential men in the NFL also paid respect to Pickens on Wednesday.

Dallas Cowboys owner Jerry Jones, of whom Pickens was close friends with, held a press conference in Frisco, Texas, to discuss the passing of Pickens.

“Boone was a personal friend and confidant of mine. He was inspirational. He was a man of sports,” Jones said in front of a large bank of monitors that had a photo of Pickens. “His love for competing, frankly, was unmatched.”

One of Jones’ players and a former Oklahoma State Cowboy Back, Blake Jarwin tweeted, “Had the amazing opportunity to meet (Boone Pickens) this past offseason. Incredible moments I’ll cherish forever. His generous contributions to Oklahoma State helped change our trajectory as a program and for that, we will always be thankful!”

On Instagram, Rickie Fowler – the top face of Cowboy golf on the PGA Tour – posted a photo of he and his wife laughing with Pickens and the message, “Boone… thank you for being you and for being a friend… over your 91 years you have made a lasting impact on countless individuals as well as the world… you were and always will be an impressive person… you’re philanthropic endeavors along are inspiring… thank you for letting us be a part of your life! Love you and rest easy my friend!”

It’s not just former Cowboys and Cowgirls who reached out over social media, but also former OSU coaches.

“Sad to hear the passing of one of the smartest, most interesting, driven person I’ve ever met… amazing man and life! He loved his University! Condolences to his family, friends and the (Oklahoma State) Family! RIP Boone,” Ford tweeted.

Gundy’s predecessor, Les Miles – who will be playing in Boone Pickens Stadium on Nov. 16 as coach of the University of Kansas – tweeted, “Boone Pickens was a man who impacted the lives of so many people in a profound way, including me. He was a friend and his gentle spirit, kindness, and generosity will never be forgotten. Rest easy, Boone.” The message included a photo of Miles and Pickens sitting at a conference table.

Also a far-reaching response on Pickens’ passing came from the National Football Foundation, which issued statements from several of its members, including Chairman Archie Manning, “T. Boone Pickens is the epitome of an American success story. "He came from humble beginnings to become one of the country's most lucrative entrepreneurs. Maybe even more impressive was his commitment to philanthropy, donating more than $1 billion in his lifetime. We were honored to have him serve on the National Football Foundation's Board of Directors, and we send our thoughts and prayers to his family."

It was announced there will be a memorial service in Stillwater – as well as one in Dallas – in tribute to Pickens. The known location in Stillwater will be Gallagher-Iba Arena – which stands next to Boone Pickens Stadium – with the date and time yet to be finalized.

Time and date set for public memorial of T. Boone Pickens at OSU