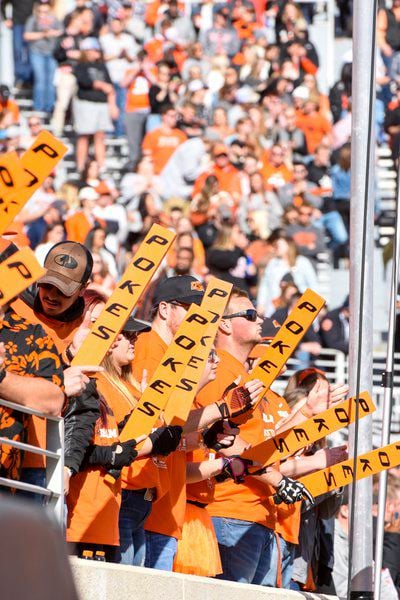 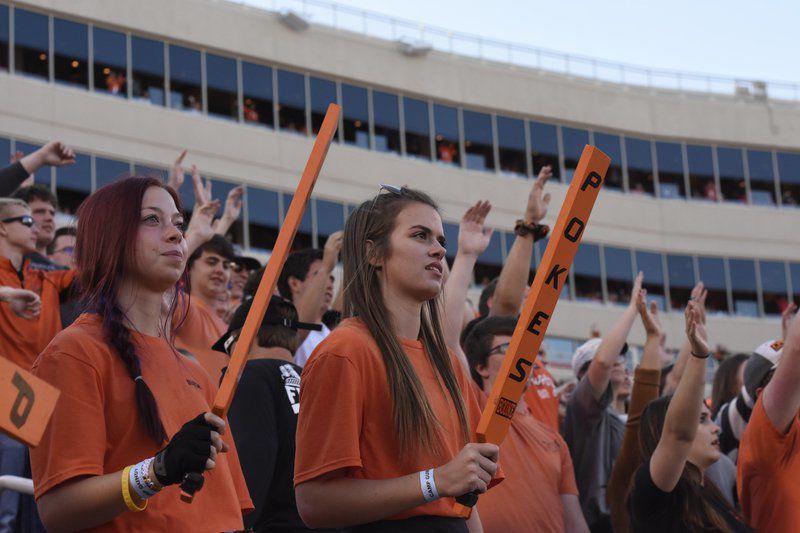 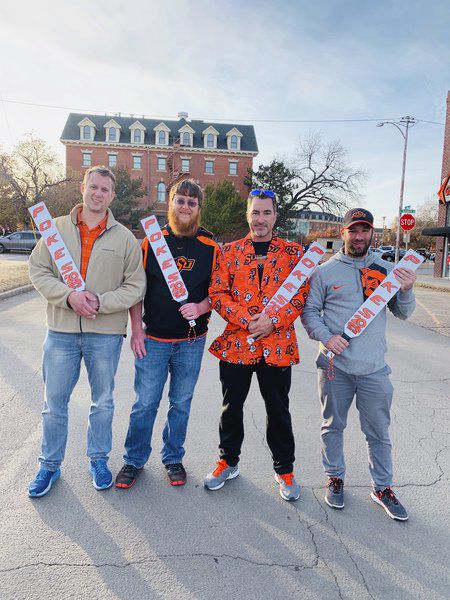 Submitted Four of the original “Paddle People” returned to Stillwater two weeks ago when Oklahoma State hosted Kansas for their 20th reunion. They are, from left, Kelly Henning, Brian McBroom, Larry Sumpter and Justin Sowell.

Submitted Four of the original “Paddle People” returned to Stillwater two weeks ago when Oklahoma State hosted Kansas for their 20th reunion. They are, from left, Kelly Henning, Brian McBroom, Larry Sumpter and Justin Sowell.

Larry Sumpter and a small group of his friends wanted to bring some excitement to Lewis Field during a dull portion of Oklahoma State football.

In the ‘90s, the Cowboys struggled to earn a winning record. After a 10-2 season in 1988, Cowboy fans endured eight-straight losing seasons before an 8-4 season in 1997. It was the lone winning season during Bob Simmons’ six seasons as coach.

Two years later, OSU was again struggling on the gridiron. It was 3-5 and riding a three-game losing streak when Kansas came to Stillwater in mid-November.

Sumpter and his friends wanted to bring a bit more excitement to the game, hoping it helped the stadium atmosphere. They briefly came up with an idea, which later sparked an OSU game-day tradition which has lasted 20 years.

Like most great ideas, it began in his garage. Sumpter and his friends wanted to take their idea to the next level, so like most college students struggling for money, they found resources closely available to them.

Their creative minds came together and sparked an idea to use something other than their own hands to make noise.

“We were in my garage at the time on Washington Street, and I had a bunch of wood in the rafters, so I thought let’s make some paddles to bang on the walls,” Sumpter said. “I made 12 paddles the week before the Kansas game in 1999 and took them to the game that week. That’s how the idea came about.”

That Saturday, they walked right into Lewis Field with wooden paddles. Because it was during a time when security wasn’t as strict, Sumpter said there were no questions asked and no one blinked an eye at a small group of college students carrying paddles into the stadium.

After the game – in which OSU beat Kansas 45-13 – those same students weren’t leaving the stadium as easily. They had quickly become minor celebrities in Stillwater.

Their paddles weren’t as decorated or fancy as the ones currently used by more than 100 students at each home game. They used what resources they had, or could afford, and made due.

“We had 11 orange paddles and mine was black,” Sumpter said. “We were broke college kids, so we just bought a couple cans of spray paint and I made stencils out of cardboard to write OSU on them.

“… I’ve got a couple of the new paddles and there’s a lot more detail to them. A lot more put into them than that first set we made.”

The newly-found paddle people enjoyed what they had created so much, they decided to take it on the road. That wasn’t received as nicely in Waco, Texas.

“The next week, four of us decided to drive down to Baylor and the ticket office actually gave us tickets,” Sumpter said. “We were going to do the same thing at away games. We probably hit the pad 10 or 15 times before they came over and told us we couldn’t do that. They cut us off quickly there.”

OSU still won the game, 34-14, but the paddles weren’t allowed. The next and final game of the season was Bedlam in Norman, so the paddle people had just one game during the 1999 season to show off their idea.

It was a success, but it took time to build interest. Sumpter said there were about eight or nine people for that first game, which grew to no more than 12 the following year, because that was the maximum number of paddles they had available to use.

He even tried to get the paddle people recognized as an official campus group. It did eventually happen, but after Sumpter graduated from OSU.

“I followed it constantly once I left, because I always hoped it would catch on and stay, but wasn’t sure that would happen after I left,” Sumpter said. “I kept in touch with the guy that took it over after I left, and he actually got it recognized as an actual group on campus.

“It’s awesome to see what it’s become. It’s fun to go down there when I get to a game to go paddle on the wall for a quarter or two. It’s pretty awesome. I was at the Kansas game a couple weeks ago and they said there’s around 140 people on the wall.”

Of course, there are a handful of differences in procedures and the way the group operates 20 years later. One of the major ones being no student is just strolling into Boone Pickens Stadium with a paddle, no questions asked.

According to Sumpter, there is a process for bringing and taking the paddles to and from BPS. It’s not as simple as it was in 1999.

“I think the way they do it now is you have to bring the paddles all in one bag to the game,” Sumpter said. “At the game, they pass them out and before it’s over, you have to turn it back in. I think everybody makes their own paddle to keep, but I think the game paddles just go to the games only.”

Sumpter and a few of his friends still have their original paddles from that Kansas game. Others, aren’t quite so lucky.

“There are a few of us who still have our original paddles,” Sumpter said. “Some people’s broke. One guy’s paddle actually broke at Baylor banging two paddles together that first year. When they told us to stop banging on the wall, he started banging his paddles together and he broke his.”

Two weeks ago, Sumpter and some of his friends who began this tradition returned to Stillwater when OSU hosted Kansas. It was nearly 20 years to the date for their reunion.

Tony Moore, of Tulsa, made them special 20th reunion paddles for the event. It was a moment Sumpter won’t forget.

“It was awesome,” Sumpter said. “It’s the first time that group has been back together since probably 2001, so it was cool seeing everybody and to get down there and paddle with everybody. It was pretty awesome.”