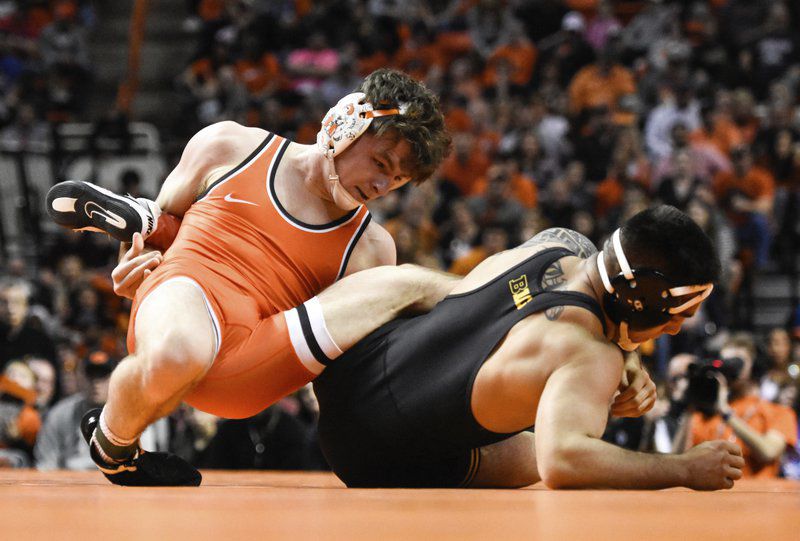 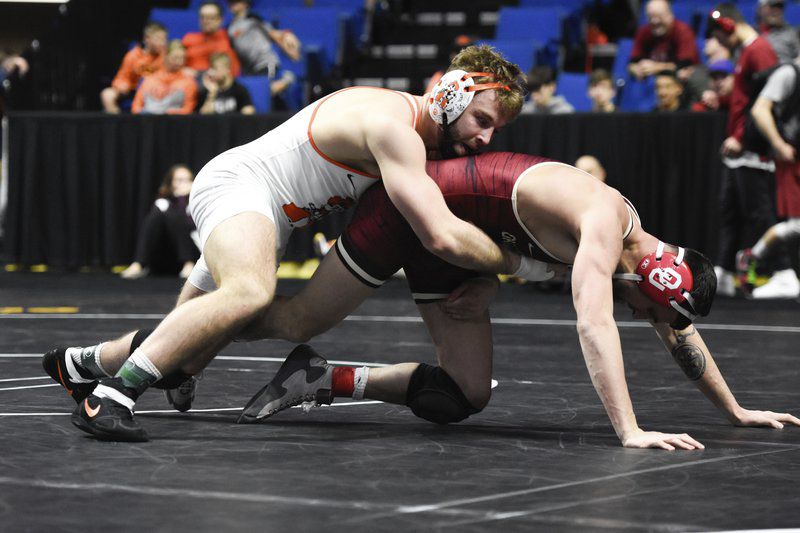 Jason Elmquist/Stillwater News Press Oklahoma State’s Joe Smith, left, made his season debut at the Southern Scuffle last week at 174 pounds. He’s slotted to wrestle the weight when the Cowboys return to dual competition at 2 p.m. Sunday inside Gallagher-Iba Arena against Northern Colorado. The dual will be streamed on ESPN+.

Jason Elmquist/Stillwater News Press Oklahoma State’s Joe Smith, left, made his season debut at the Southern Scuffle last week at 174 pounds. He’s slotted to wrestle the weight when the Cowboys return to dual competition at 2 p.m. Sunday inside Gallagher-Iba Arena against Northern Colorado. The dual will be streamed on ESPN+.

Oklahoma State wrestling got a shot in the arm just as the second half of the dual season is set to ramp up.

When the Cowboys traveled to Tennessee to compete in the Southern Scuffle, two wrestlers who had yet to compete this season finally got onto the mat – and are expected to be key contributors for any postseason push.

Joe Smith, who was in and out of the dual lineup in 2018-19 as he wrestled with cutting weight, finally hit a slightly higher target weight from last year to compete in the 174-pound bracket at the Scuffle, where he was slotted as the No. 1 seed despite not having wrestled since the last year’s NCAA tournament.

After two solid matches – a major decision and a fall – the wheels began to fall off, losing to an unseeded wrestler from Big 12 affiliate North Dakota State in the Round of 16 and then took a medical forfeit.

“Joe wrestled a couple of good matches at the start, and then seemed to hit a wall a little bit with his weight,” Oklahoma State wrestling coach John Smith said.

For the younger Smith, getting back on the mat at the start of January at a slightly heavier weight could be the change needed to build his stamina before a postseason run.

He showed flashes at last year’s tournament of being an All-American wrestler, but eventually he ran out of gas after having competed in just 29 matches throughout the season – and being sidelined for nearly a month prior to the Big 12 tournament.

“You can train as long as you want, but if you don’t get out there and compete, you can forget how tough the competition really is,” Joe Smith said. “That’s the main thing I got out of it – just a little reminder of where you stand and what you’ve got to do to be back on top.”

While it’s been weight that has kept Joe Smith off the mat, fellow Oklahoma native Kaden Gfeller has been working his way back onto the mat from an ankle injury he suffered right before the start of the season.

The NCAA qualifier at 149 pounds as a redshirt freshman last year made a run at the Southern Scuffle title again – after winning in the two previous years – but lost in the championship match of 141 pounds in his first time on the mat this season.

“He just got pummeled in the finals, it wasn’t even close,” John Smith said. “I haven’t seen him get beat like that in a while. For that reason, you have to look at yourself and say, ‘Am I ready?’ Hopefully we’ll see some improvement off of it. …

“Gfeller had to have given up close to a record in riding time. Somebody should be arrested for that if somebody rides you for almost six minutes.”

There is no guarantee Gfeller will be in the lineup for Sunday’s home dual against Northern Colorado.

While the Oklahoma City native was the runner-up in Tennessee, his fill-in at 141, Dusty Hone, only lost one match, too – to the tournament champion – in a slightly more competitive match.

Gfeller gave up over five minutes of riding time in the championship match against Real Woods of Stanford, with his only escape in the 6-1 loss coming with 29 seconds left in the third period – after Woods had ridden him for two minutes in each of the first and second periods.

“That’s real frustrating, especially since I don’t get rode out – I usually get a few reversals,” Gfeller said. “It’s something I’ve got to work on. Can’t let it happen again.

“I’m not one to make excuses, but I’m still a little banged up – I’m still trying to recover from this injury, and it’s something I’m going to have to work on. I’ve got figure out different ways to get off bottom, or different strategies that don’t bother my ankle as much when I’m rolling around like that.”

Oklahoma State’s wrestling coach didn’t commit to naming the starter for Sunday’s dual at 141 pounds, saying there will “possibly” be a ranking match before the weekend to decide if Hone remains in the starting line or Gfeller makes his dual debut.

“He’s a good dude, he’s awesome. We’re still homies,” Gfeller said of Hone. “But whenever we get out there, he ain’t my homie.”

The two did meet up in the Reno Tournament of Champions last season at 149 pounds, with a healthy Gfeller earning a 13-5 major decision in the title match.