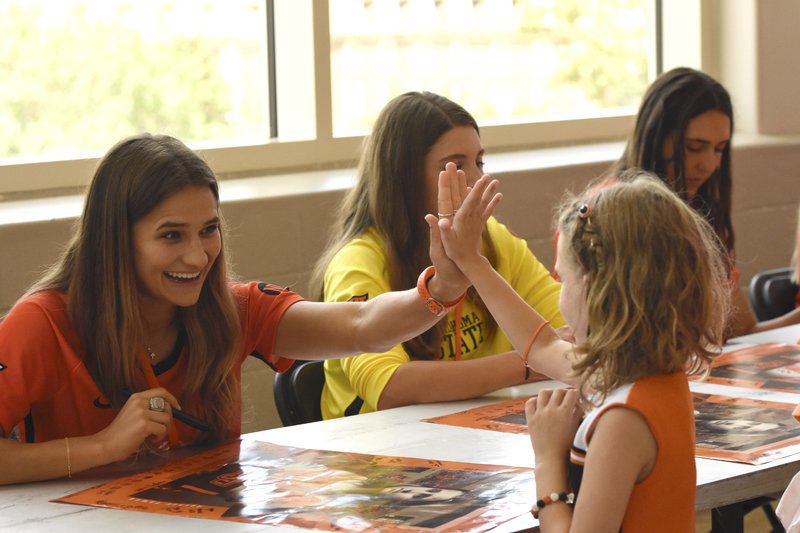 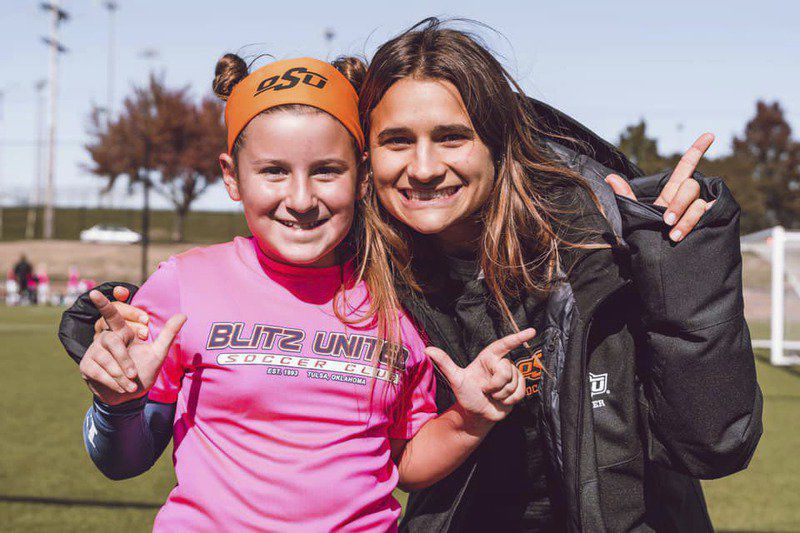 OSU Athletics Former Oklahoma State women’s soccer player Jaci Jones, right, developed a relationship with Reese during her playing days at OSU. Reese is the daughter of former Cowgirl Carrie Phillips. Jones and the Cowgirls visited Reese and her team during their trip to Kansas City, Missouri, for the Big 12 Conference Tournament this fall. 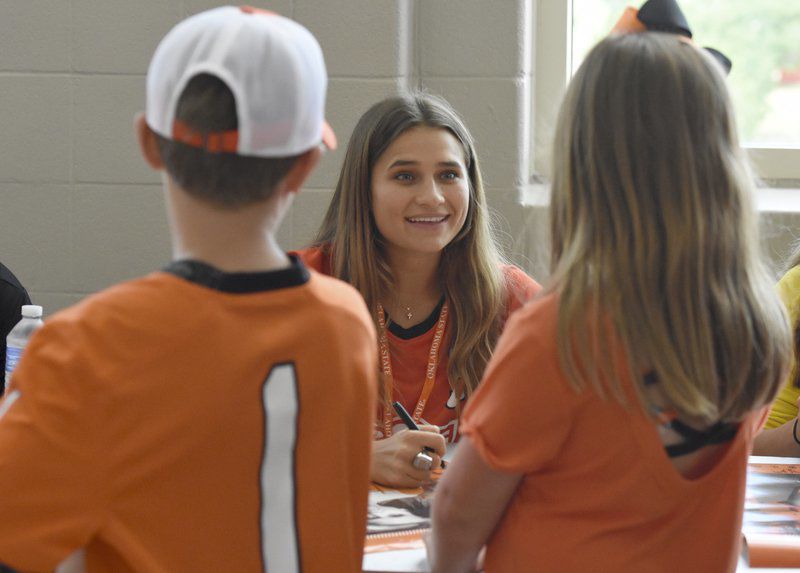 OSU Athletics Former Oklahoma State women’s soccer player Jaci Jones, right, developed a relationship with Reese during her playing days at OSU. Reese is the daughter of former Cowgirl Carrie Phillips. Jones and the Cowgirls visited Reese and her team during their trip to Kansas City, Missouri, for the Big 12 Conference Tournament this fall.

Jaci Jones’ jaw dropped and remained there for several seconds as Wednesday’s news was announced to her.

Her initial reaction was followed by moments of laughter and amazement.

The former Oklahoma State women’s soccer player from Mustang was trying to quickly process that news from OSU Deputy athletic director Chad Weiberg on a Zoom meeting, which was later shared by OSU Athletics via social media.

“It was a total surprise,” Jones said in an interview Thursday. “… Everyone started saying all of these nice things about me and it was really nice, but I didn’t feel like I was supposed to be on the call right now. I thought maybe they let me on too early.”

Jones was on the meeting with coaches, sports information directors and her academic adviser when Weiberg congratulated her on being named the Big 12 Conference Sportsperson of the Year.

She thought the meeting was to review her nomination and make sure every bit of information possible was included. Little did she know, the conference had already made its selection.

“I had no idea, whatsoever,” Jones said. “It took me a bit to process it. It almost felt like a dream. There are so many people deserving people on that list, so even to be nominated is such a huge accomplishment. Then, telling me I won it was absolutely incredible. I was sitting there in shock. I was giggly, and I almost cried. It was a lot.”

To make the moment even bigger, Jones became the first OSU student-athlete to win the award that began in 2000-01 to recognize individuals for sportsmanship, community service and academic achievement during the collegiate careers.

“That, to me, is a little bit unbelievable, because I’ve looked up to so many people at Oklahoma State just in my four years,” Jones said. “Not only that, but I’ve grown up an Oklahoma State fan, so I’ve always looked up to a lot of the student-athletes that have come before me. Being the first person from OSU to win that award is mind-blowing to me, because there are so many wonderful people I’ve met and heard great things about that this means so much.”

On the field, Jones was a four-year starter for the Cowgirls, helping them win a pair of Big 12 Championships. She scored seven goals and racked up 12 assists, which ranked 10th nationally, this fall in her final season.

Off the field, Jones bonded with a young girl named Reese, who’s the daughter of former Cowgirl Carrie (Jones) Phillips. Reese tragically lost her father. Phillips played at OSU from 1997-2000.

Soon after the tragedy, OSU sent her a care package that included an autographed No. 9 jersey of her favorite Cowgirl, who also happened to be her soccer camp counselor. Jones also wrote Reese a note that was included in the package.

“From there, we’ve kept a good relationship,” Jones said. “Every time she comes to the camp, I always get to be her counselor, which is awesome. Whenever we went to the Big 12 Championship in Kansas City, her team was up there and I said we have to go support her. The whole team went up there and that was so special.”

Jones and the Cowgirls did visit Reese and her team this past fall during the Big 12 Tournament in Kansas City, Missouri. It was a memorable moment for the squad.

Reese has even dressed as Jones for Halloween. It’s a friendship that still continues, strengthening both individuals.

“To be there for someone who has lost someone so special to them and so unexpectedly is awesome,” Jones said. “She’s changed my life in a way, as well. For her to be that young and go through all of that and still play soccer and want to be out there with her friends is incredible. She’s honestly taught me so much.”

“I still get sent photos by Carrie, her mother, and I hear all the time about how much that relationship means to Reese,” Hancock said. “I just don’t think that can be overstated how important that is for a young person, who’s really impressionable and really needs some positive role models to look up to, and Jaci is very much that.”

It’s the off-the-field activities that have stuck with Jones more since ending her collegiate career. Sure, some conference titles are still memorable, but the relationships and inspiration she’s brought to young fans has meant more.

“On the field, it was definitely the two Big 12 Championships,” Jones said. “Off the field, it’s been giving back to the community and the fans. As a little kid, I was a fan of Cowgirl FC – and I’ll always be a fan – and I looked up to those girls, so I wanted to be someone little girls could look up to. My favorite thing about being on Cowgirl FC and being a student-athlete in general was being able to use the platform we’re given to help young kids and teach them this is possible.”

During her time in Stillwater, she was involved in many charities and groups. It’s one of the reasons she loves Stillwater.

Jones even loved Stillwater before she came to OSU. While being recruited by a school in the Southeastern Conference, she told the coach that she was considering OSU and he responded by saying he didn’t understand the deal with Stillwater and why it’s special to so many people.

“At the time, I didn’t know what to say to him,” Jones said. “I told him I didn’t know how to explain it. The thing is no one can really explain the feeling you get and the community that you’re surrounded by until you’re actually there and you’re living it day by day. This is just a testament to that with all of the congratulations that I’m getting and everyone being so kind and so sweet.”

Although her college playing days are over, Jones will be returning to Stillwater for one more semester of classes. It will be a different semester for her.

“I get to have one semester as a normal student,” Jones said. “We’ll see how that goes. … I’d love to be around the team as much possible and just volunteer my time.”

Jones spent part of this spring training and trying out for three teams in the National Women’s Soccer League. She was offered a spot on the Houston Dash’s preseason squad for a week as she tried to make the roster. Jones was quite set on heading to Houston when one of her former club coaches talked her into going to Chicago.

The next day, she was on a plane to the Windy City. After two days of tryouts, Jones was offered a four-week preseason stint with the Chicago Red Stars. After scrambling to get her plans together, Jones was back in Chicago a few days later, planning to stay for at least four weeks.

Unfortunately, the COVID-19 pandemic hit the country less than two weeks later. The NWSL came to a temporary halt.

The NWSL just recently announced plans to resume June 27 with a shortened, tournament-style season. This meant no more tryouts and rosters must be filled, which left Jones without a team.

“I honestly never expected to make the roster by any means,” Jones said. “I just wanted to go and experience it, and I did that. It was an amazing experience and I got to play with players that I’ve seen win a World Cup and I look up to those girls. It was a great experience, but the process is pretty challenging. It was tough, but it was so worth it.”

The idea of trying out again next year is a real possibility, but first Jones wants to finish her academic work.

“I don’t want to just give it up yet, honestly,” Jones said. “I feel like this year I didn’t get the best opportunity to do it. I was thankful I got the opportunity to go up there for two weeks, but I didn’t get to live out the full preseason. I don’t think it’s something that I’ll give up, but I definitely need to get my degree and they won’t have tryouts again until next January.”

Until she can come back to OSU to complete her degree, Jones is now turning her attention to running the OKC Memorial Half Marathon for the first time. The former high school cross country runner said she’s never ran more than 11 miles, so she’s begun training for the 13.1-mile race that’s set for Oct. 4.

“I always have to keep myself busy,” Jones said. “So, that’s what I’m going to do next. … I like to set goals and reach them, and this is the next goal for me.”