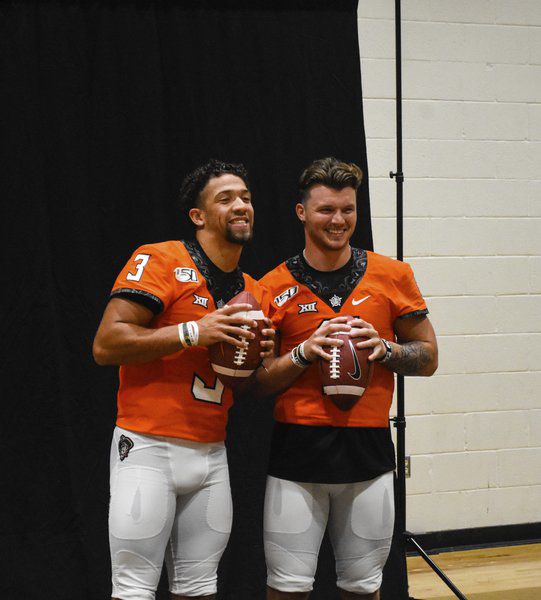 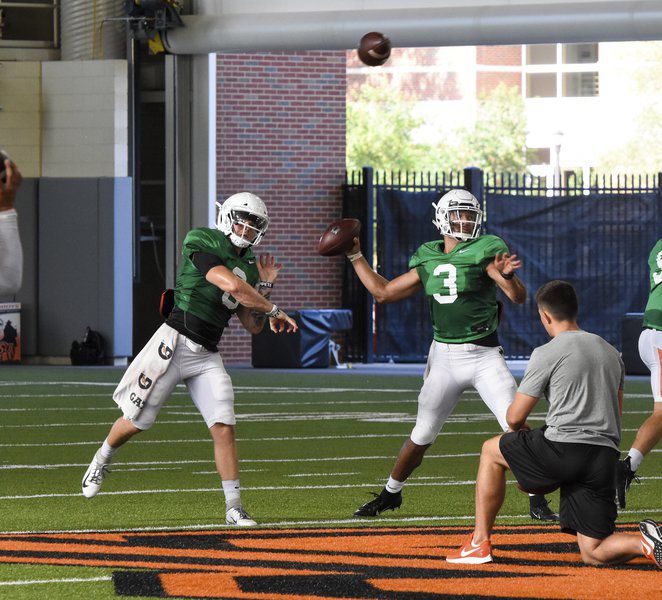 In fact, they’ve become quite good friends during their year in Stillwater.

Still, many believe they must be enemies based on their competition to become what most would consider the top coveted position on the OSU football team.

Many great quarterbacks have come through Stillwater and left their mark. Of course, there was now OSU coach Mike Gundy, who played along side legendary running back Barry Sanders.

More recently, Zac Robinson, Brandon Weeden and Mason Rudolph have donned the title of Cowboy quarterback and had a lot of success doing so. But who’s next?

That’s the primary question most OSU fans ask with the season opener at Oregon State just a week away. Whether it’s Brown or Sanders, the next starting quarterback for Gundy’s team hasn’t thrown a pass in a college game wearing the OSU uniform.

“We’re both great quarterbacks and I believe Coach Gundy is going to make the best decision for this team, and I want what’s best for this team,” Sanders said.

The battle to win the starting role has been happening for months – all the way back to the end of last year’s bowl game. It continued into spring and then into fall camp, but neither player has separated from the other.

But, in reality, there isn’t a battle when you ask the players. They know they’re competing for the job, but don’t view it as one player versus the other.

That’s the friendship that has bonded the two quarterbacks. They both want the starting job, but they want to win games, more importantly.

It’s one reason the Cowboy football Twitter account released a video of the pair sitting and talking right before fall camp started. Their friendship on the video is real.

“The social media video that was put out recently captured those two kids perfectly,” OSU offensive coordinator Sean Gleeson said. “They work hard. They compete. This spring was a chance for them to get a foundation in the offense and be around (No.) 1s for a little while. With Taylor (Cornelius) last year, he’s a first-year starter – you’re going to give him the bulk of the reps. In the spring, they got equal opportunity playing with the 1s.

“We’re hoping that the training camp battle is something that makes our whole team better and gives us an edge, because those two guys are just scratching and clawing. … What’s great about them, and you saw it in the video, is when that competition stops after practice or in the meeting room, they are just great kids. They rode together that night in the same pickup truck, so that gives you an indication how they feel about each other.”

Gleeson added that video is an example of the culture built at OSU – one reason both players came here.

“That’s Cowboy culture,” Gleeson said. “People ask, what is Cowboy culture? It’s when you have two kids battling it out for a position and it should be competitive, it should be cutthroat at times. We want to win games here and we want to score a lot of points. To see those guys embrace each other in the locker room, that was not staged at all. That’s who they are. I think that’s a testament to Coach Gundy and the type of kids he brings in her and then how we shape them while they’re here, as well. That was great to see.”

That friendship has spread outside of the football field. Brown, a redshirt senior from San Mateo, California, has taken up some of the outdoor hobbies Sanders, a redshirt freshman from Denton, Texas, has enjoyed for years.

“Honestly, when we met, we were different,” Sanders said. “Dru is kind of catching his Oklahoma, small town vibe. He’s getting into fishing. He is already a vocal person and I kind of love it. We might joke about my hair one day. … He’s always laughing. He’s always got a smile on his face.”

“I’ve gotten into fishing since I’ve gotten out here,” Brown said. “I’ve never really done that before, so it’s something different.

“I like the small town vibe. I like how it’s open. I’m from a city, so it can get a little condensed and you can’t get as easy. It’s been cool being able to live in a small town.”

Both players enjoy Stillwater and OSU for similar reasons. It’s why they came here – one as a graduate transfer and the other as a true freshman.

They want to be the starting quarterback and take the field first in Corvallis, Oregon, next week.

“I like to think I show up and give my best effort every day,” Brown said. “I prepare a lot physically and mentally. At the end of the day, the coaches are going to pick someone and I’ll accept whatever happens. Like I’ve said, we’re both here to win, so whatever happens, we’re going to support each other because what we came here to do is win.”