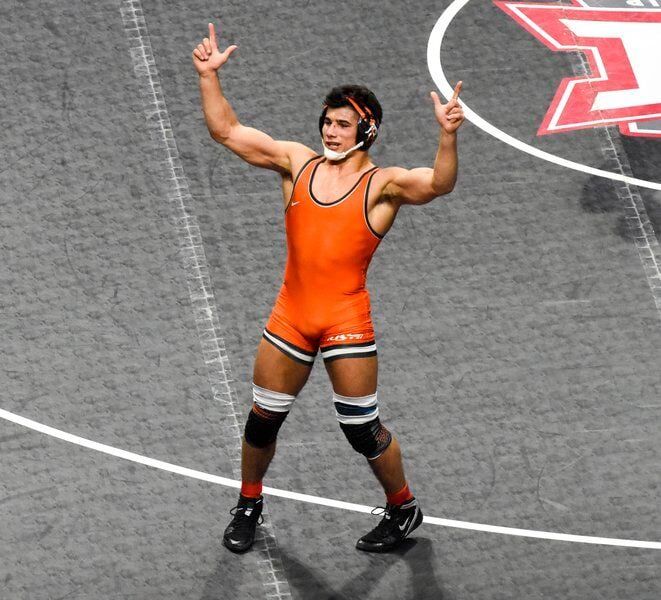 Jason Elmquist/Stillwater News Press Oklahoma State’s A.J. Ferrari became the first OSU athlete to announce the signing of a deal once the NIL ruling was put into place Thursday. The 197-pound wrestling national champion signed a deal with Nearfall Clothing. 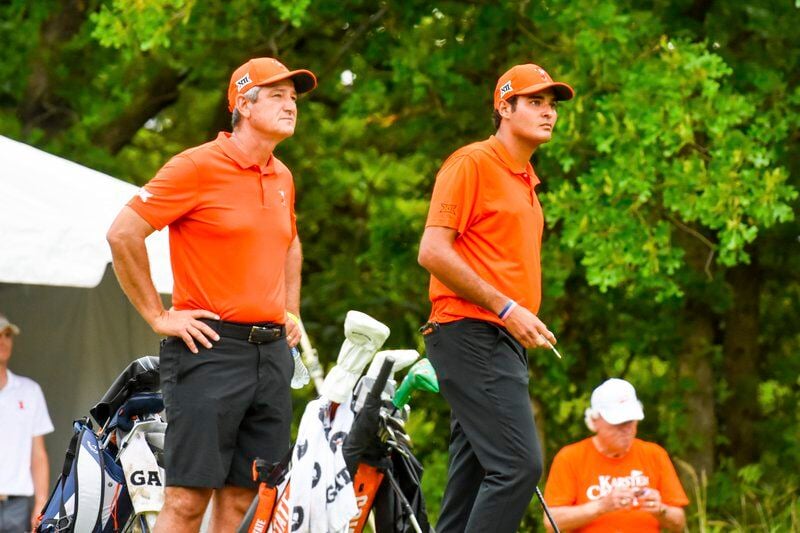 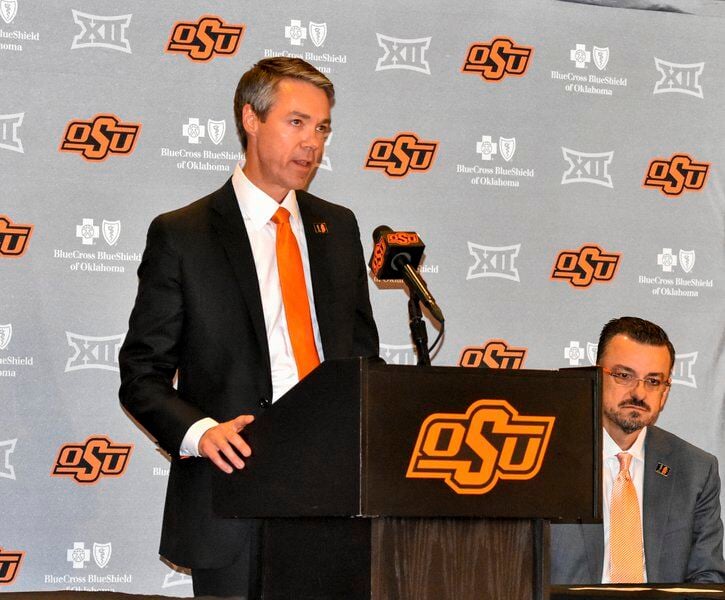 Chad Weiberg, left, gives his opening remarks Thursday as the new athletic director of Oklahoma State while emcee Larry Reece listens to Weiberg's address. Weiberg, an OSU graduate, had served as the deputy athletic director at his alma mater for the past four years.

Jason Elmquist/Stillwater News Press Oklahoma State’s A.J. Ferrari became the first OSU athlete to announce the signing of a deal once the NIL ruling was put into place Thursday. The 197-pound wrestling national champion signed a deal with Nearfall Clothing.

Chad Weiberg, left, gives his opening remarks Thursday as the new athletic director of Oklahoma State while emcee Larry Reece listens to Weiberg's address. Weiberg, an OSU graduate, had served as the deputy athletic director at his alma mater for the past four years.

Chad Weiberg’s tenure as the Oklahoma State athletic director began the same day as arguably one of the biggest rules in collegiate sports.

Weiberg will follow in the footsteps of longtime AD and coach Mike Holder, who helped transform many of the OSU facilities into those among the best in the country for their respective sport. It’s a big part of the legacy Holder left when he retired Wednesday.

On Thursday, Weiberg officially took over as AD with a press conference inside the O-Club in Gallagher-Iba Arena. He will likely also help transform OSU, but in a much different manner.

Thursday began the groundbreaking rule that allows college athletes to profit from their name, image and likeness (NIL). It’s expected to be a game changer for college athletics, but the exact ramifications, impact and complications for athletes and athletic departments is unknown.

“I think it is challenging, exciting, opportunistic, all of those things and I don’t know we fully know yet what that’s going to look like,” Weiberg said during his press conference. “I think it is an opportunity. It’s here and I think our staff has done a great job of preparing OSU athletics to take it on and be part of it. … We have spent a lot of time on it and it is something our staff has had to work on and spend time on.

“A year and a half ago, we brought on our partner, INFLCR, so it’s something we’ve been diligently working on for at least that long. I feel like we’re ready to go with it. We will learn as we go. I think all of us are. We know it’s not going to be perfect from the beginning and we will make adjustments and tweak as we go, but I feel good about where we are with it.”

Before Weiberg could even finish his press conference, OSU already had its first athlete announce a deal via Twitter. National champion wrestler A.J. Ferrari, who won the 197-pound NCAA title as a true freshman in March when he went viral with his post match interview, posted his announcement at 10:59 a.m. Thursday.

More Cowboys are likely to sign their own profit-making deals in the upcoming weeks and months. For now, the OSU coaches are trying to wrap their heads around the NIL ruling, but they are in favor of it for their student-athletes.

“I think it’s huge,” OSU men’s golf coach Alan Bratton said. “The OSU brand is strong. I think we’re positioned to help our athletes as well or better than anybody out there, beyond just golf. Obviously, I think we have the strongest brand in the country for golf, but again, that permeates our whole department – 52 national championships and a fan base that’s rabid about sports and the performances of our teams. Our brand is as strong as any, and that only adds value to a great athletes choosing Oklahoma State.”

Bratton, like many, believe golfers could benefit tremendously from the NIL ruling. Yet, he sees it as helping the entire OSU department.

“We don’t just sell the golf, we sell the whole experience here in Stillwater – the community and all the sports programs,” Bratton said. “If you can surround yourself with other great athletes, it attracts the right kind of people, and we’ve proven that over a long time. Now, they’re going to have the opportunity to financially benefit from that while they’re in school. I think that’s going to be a huge home run for all of Oklahoma State athletics, and certainly for OSU golf.”

OSU baseball coach Josh Holliday, who like Bratton was a college athlete for OSU, agreed. Holliday said something like NIL wasn’t something they thought about during his career more than 20 years ago, but he’s happy to help his current players.

“The positive side of it is the benefit it provides the student-athletes,” Holliday said. “That’s a good thing. From there, it’s our job to help continue to make the experience of our kids better and better, and this gives some new opportunities for them to capitalize on their experience and also their talent. I’m looking forward to seeing how we can work alongside our athletes to make this another positive part of their experience.”

“… Any time you take on new opportunities, you want to capitalize for your kids as best as you can. That’s always been our goal. We’ll take advantage of this in a way that makes Oklahoma State stronger.”

OSU men’s basketball coach Mike Boynton knows his star freshman Cade Cunningham would have benefited financially from NIL this past year. He also hopes athletes are aware of what they are signing, because he sees some potential downsides to the ruling, while also seeing the obvious upside.

“There are some things we don’t know that could be challenging here,” Boynton said. “These kids are now becoming personal brand – businesses if you will – and there’s implications to that. You have to sign contracts. You have to be able to read and understand what they mean. If I sign a contract with Company X and it says I have to be somewhere 10 times a year, and I don’t meet the obligations of the contract, they don’t have to pay me.

“They also could probably sue me if I don’t meet my contractual obligations. Then there is a tax implication on that if you’re making money. So, you have to understand all of it. There are a lot of layers to this whole deal that aren’t as simple as maybe initially people think, but I think they’ll do a good job with it.”

OSU cross country and track and field coach Dave Smith also has mixed feelings about NIL, but he definitely sees his athletes being able to profit, even in a sport that’s less televised.

“It’s hard for me to know,” Smith said. “My mind swings two ways. One time, I think there is all of this buzz about it, but three years from now, it’s just noise. When there are 400,000 Power Five student-athletes making money off their name, image and likeness, there’s not a lot to go around, right? On the other hand, I’m hearing of things that are happening right now for athletes around the country and I didn’t have any idea there would be that kind of demand for their name, image and likeness. It’s interesting.

“Someone said it could be equivalent to Title IX, and I don’t think that’s true. I think Title IX was monumental and I think we all look back on that as an incredibly good thing for college athletes. It’s certainly a change and provides a lot of opportunity for student-athletes to pay for school, especially in equivalency sports like ours where very few people get full scholarships. This is a way for them to actually pay for school, so I think that’s awesome.”

For now, coaches and athletes will begin wrapping their heads around NIL and what all encompasses the groundbreaking ruling. Boynton knows it’s not something OSU can push to the side, because it has implications in recruiting and maintaining student-athletes.

“I’m excited to see how it works out and we’ll prepare to do as good of a job as anybody,” Boynton said.

“My job is to evolve and adapt to the new landscape. It’s here and it’s not changing, so let’s try to advantage ourselves the best we can so that we’re not at a disadvantage, because it’s going to be a place you have to operate in.”