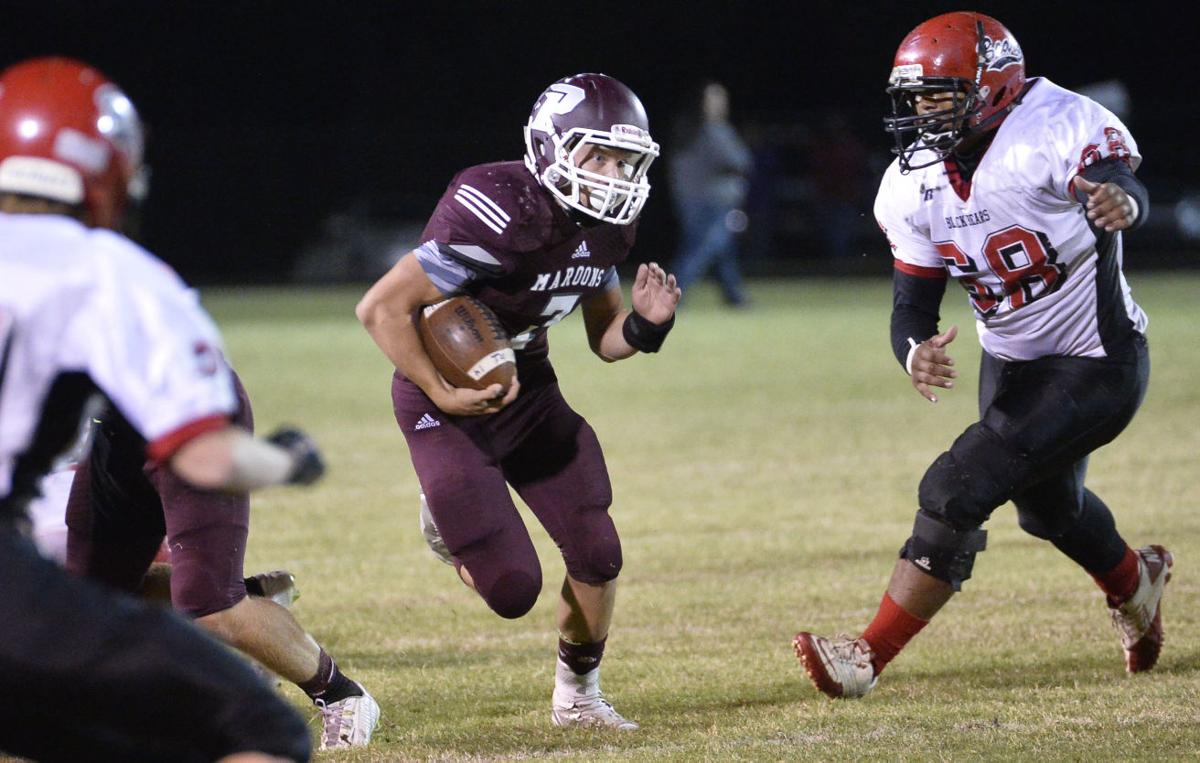 Perry's Kolby Mendenhall runs the ball during a high school football game between Perry and Pawnee in Perry on Friday night. 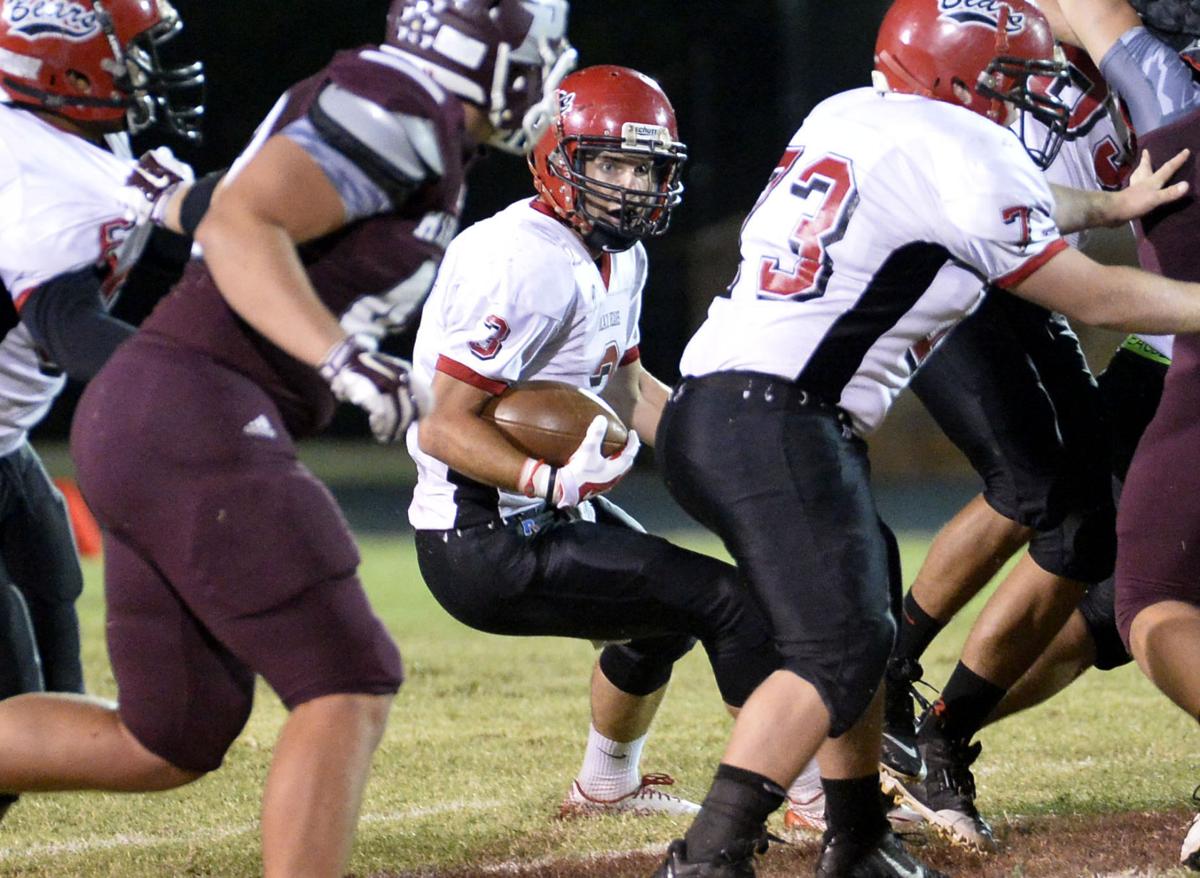 Pawnee running back Browning Nicolet searches for a hole in the line during Friday night's game in Perry. 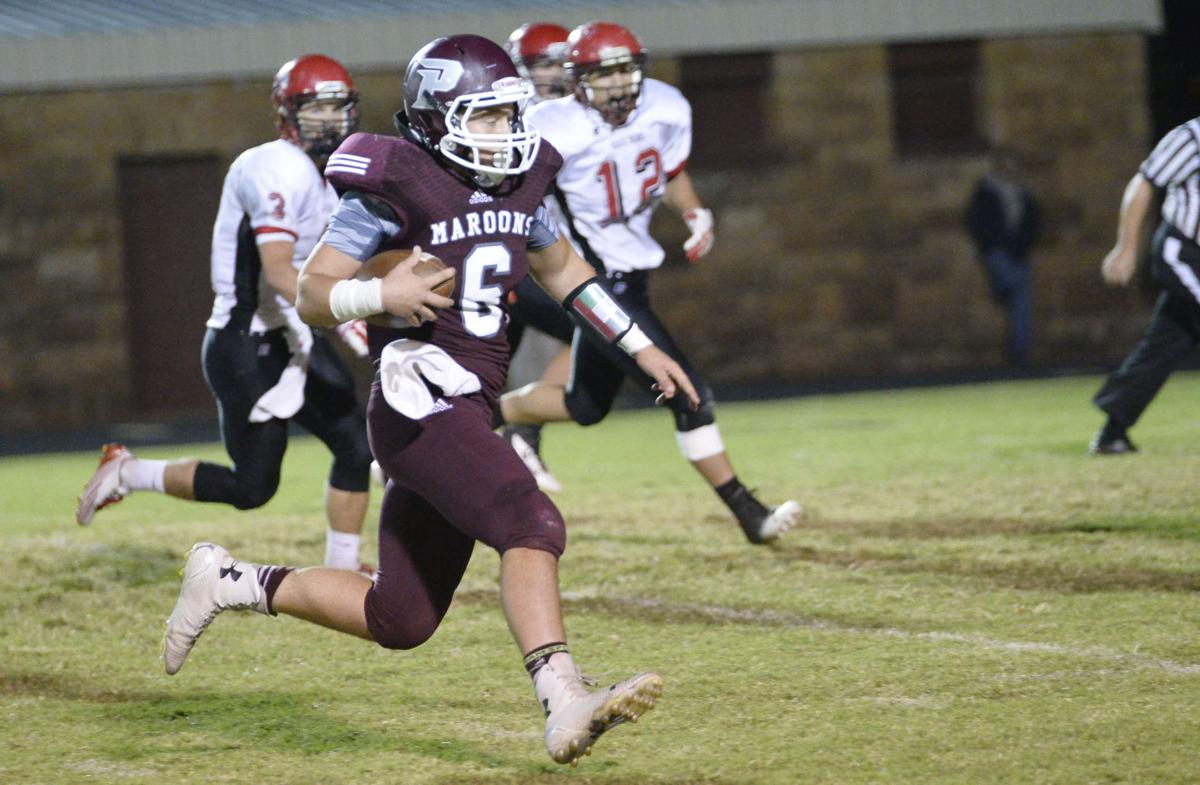 Perry's Brian Hatfield runs the ball for a touchdown during Friday's victory over Pawnee.

Perry's Kolby Mendenhall runs the ball during a high school football game between Perry and Pawnee in Perry on Friday night.

Pawnee running back Browning Nicolet searches for a hole in the line during Friday night's game in Perry.

Perry's Brian Hatfield runs the ball for a touchdown during Friday's victory over Pawnee.

PERRY – After a slow start on both sides of the field, the Perry High football team quickly disposed of Pawnee with strong second and third quarters Friday night.

The Maroons took advantage of good starting field possession, thanks to their defense and special teams. They scored 28 unanswered points in the second quarter before adding another 15 after the break.

“We struggled a lot,” Bennett said. “There were a lot of distractions this week. I’m just glad we overcame that and the slow start and finally started playing football like we’re coached to do and like we’re capable of doing. I like homecoming, but I’m glad it’s over. Now we can focus at getting better and football game by game.”

Pawnee led 3-0 before quarterback Nathan Brock left the game with an injury. The Black Bears’ offense wasn’t the same without Brock for the final three quarters. They tried Browning Nicolet and Jacob Miller at quarterback, but the loss of Brock was evident on the field.

“When he came out at the end of the first quarter, we had to try and make some changes,” Cook said. “It obviously didn’t work out in our favor very well.”

Cook said Brock injured his knee on a defensive play, but the severity of the injury is unknown. He hopes it isn’t serious.

“Nathan has a possible ACL tear or sprain,” Cook said. “We’re not sure yet. Keep him in your prayers and hopefully everything turns out all right.”

Without Brock in the game, Perry capitalized on defense. The Maroons shut down Pawnee during the second and third quarters and also took advantage of seven Pawnee fumbles – three of which were recovered by Perry.

On the first series without Brock, Nicolet was sacked and lost the ball. Perry’s Garrett Beier scooped up the ball and rumbled in from 15 yards for the score.

Following a Pawnee three-and-out, Perry’s Kolby Mendenhall broke two tackles during a 53-yard touchdown run. Two possessions later, Perry quarterback Dawson Padilla threw a fade pass to the back of the end zone. Braden Sweet ran down the pass and caught it at near full extension for the third score of the second quarter.

On the ensuing drive, Pawnee’s punt was blocked by Austin Reyes. Pawnee’s Anthony Leas recovered it for an 18-yard loss as the Black Bears turned it over on downs. One play later, Perry’s Brian Hatfield gave the Maroons their fourth touchdown of the quarter on a 25-yard run.

“Defensively, we did a good job,” Bennett said. “That’s our number one priority is to get our defense rolling.

On the ensuing drive, Nicolet’s pass deflected off of his wide receiver’s hands and into the hands of Perry’s Joe Rupp, who returned it to near midfield. Six plays later, Padilla rushed in from 13 yards for the final Maroons score.

Pawnee added one touchdown late as its starters remained in the game against the Maroons’ second string.

“We had three or four turnovers,” Cook said. “We didn’t have those until Nathan went out. We have a lot of work to do. We have to go in tomorrow, re-evaluate and put in a new offense.”

Next week, Perry is home as it hosts Cashion. Meanwhile, Pawnee travels to Hennessey.