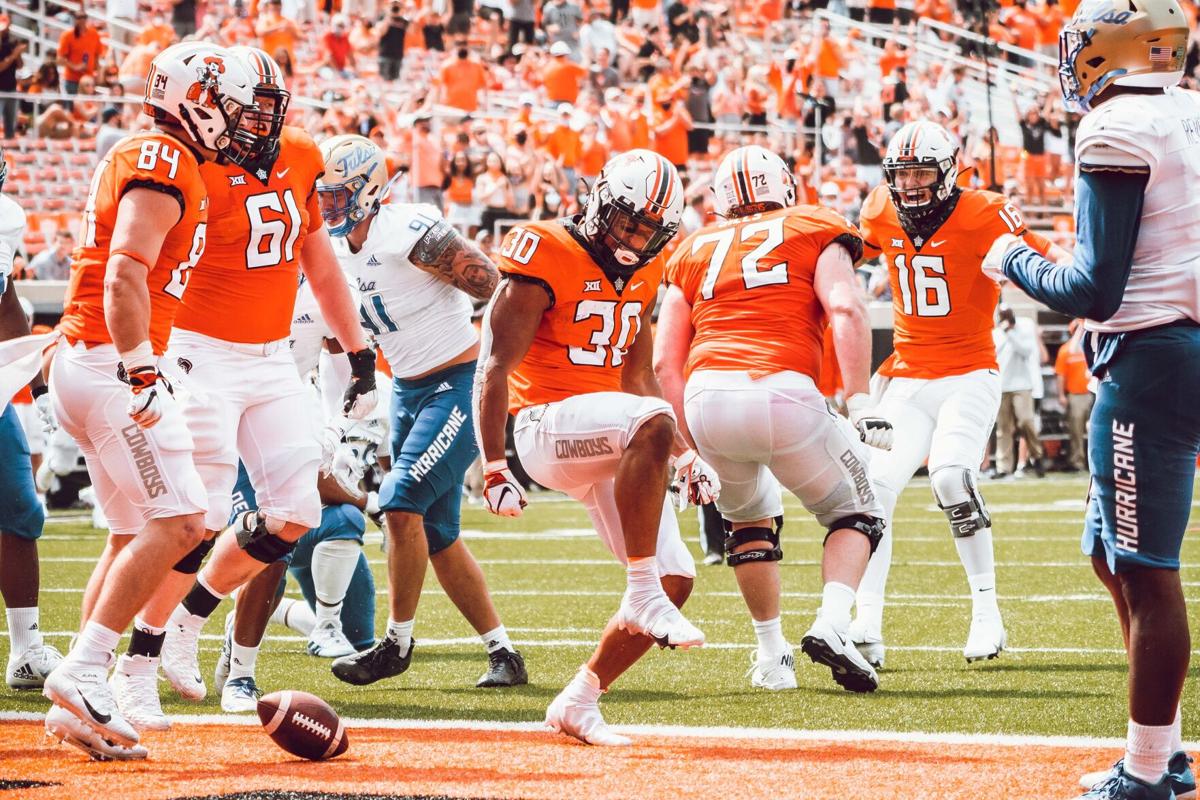 Oklahoma State redshirt junior Chuba Hubbard (30) celebrates his 3-yard touchdown run on the first play of the fourth quarter Saturday. Hubbard carried the ball 27 times for 93 yards in the Cowboys' 16-7 win over Tulsa. 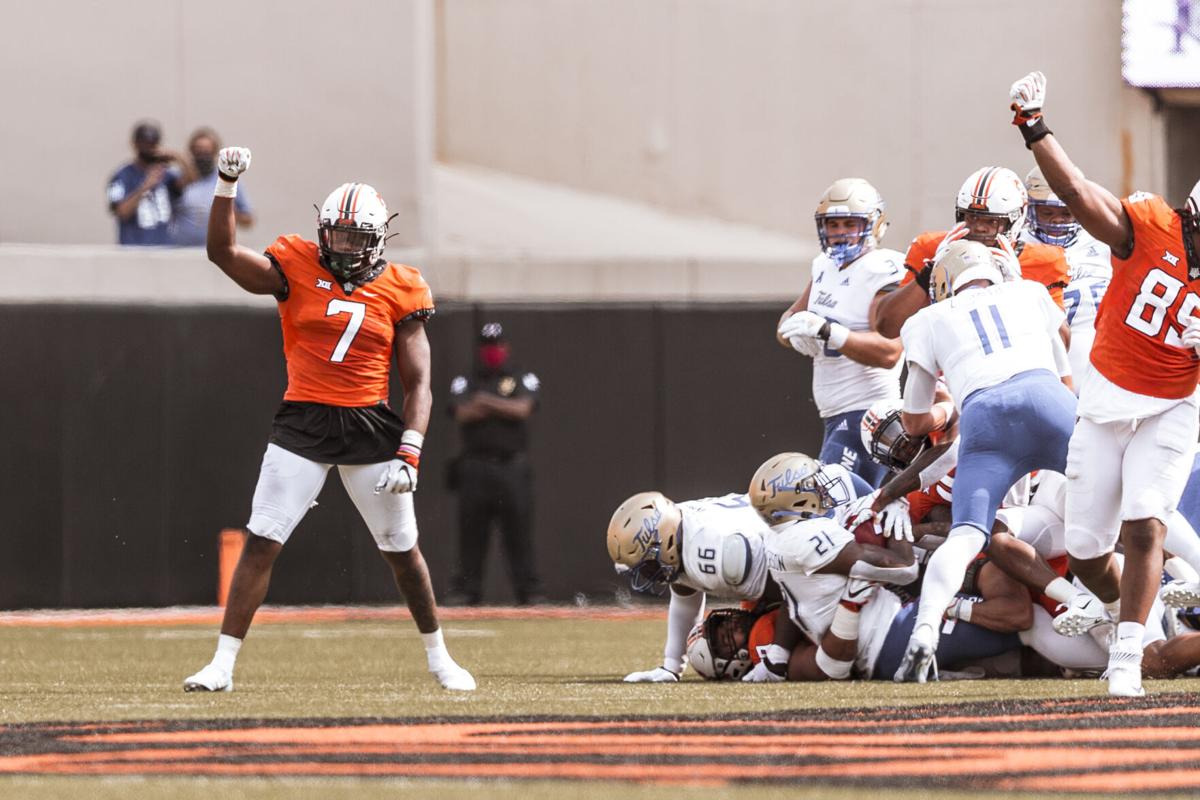 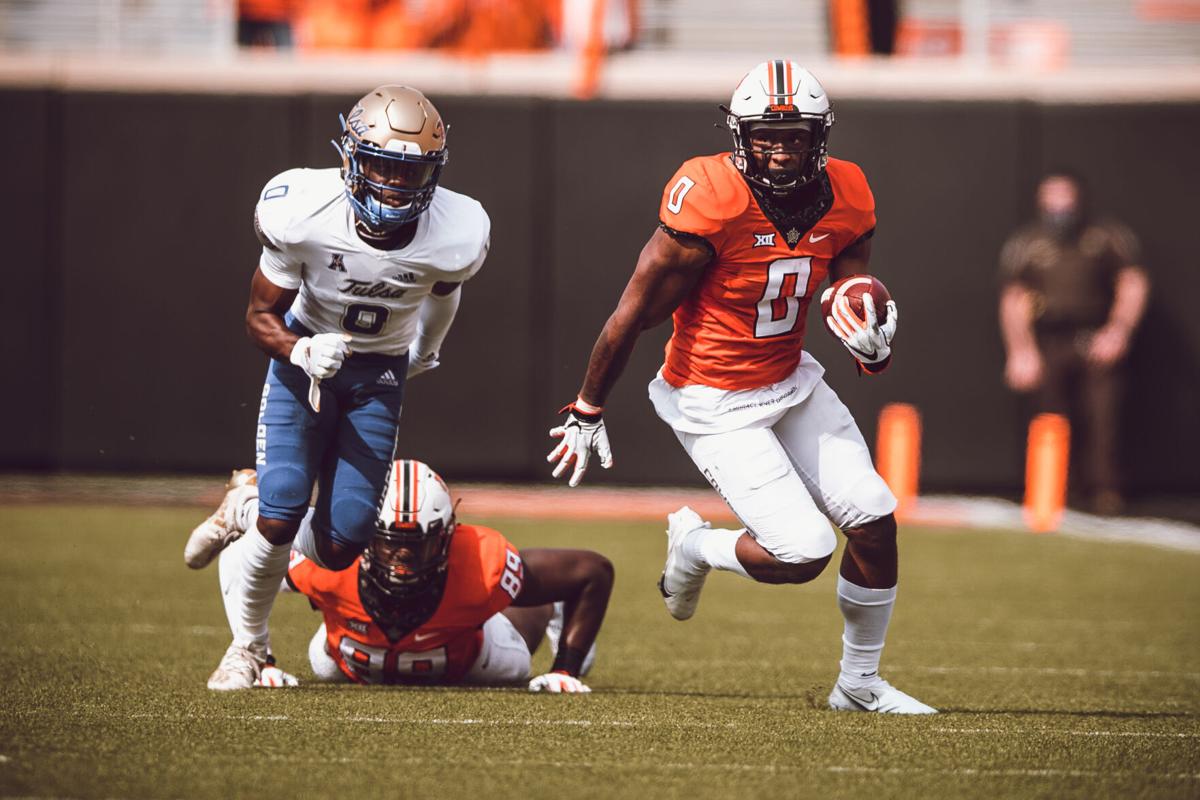 Oklahoma State redshirt junior Chuba Hubbard (30) celebrates his 3-yard touchdown run on the first play of the fourth quarter Saturday. Hubbard carried the ball 27 times for 93 yards in the Cowboys' 16-7 win over Tulsa.

For most of Saturday’s game at Boone Pickens Stadium, the Oklahoma State offense’s engine was stuck in neutral, but the Cowboys found a way to win their season opener.

The Cowboys eventually put the offense into drive late in the third quarter and scored their only touchdown of the contest. A trio of field goals – including one late in the fourth quarter – helped the Cowboys seal the 16-7 victory over Tulsa.

It was the fewest points OSU has scored in a win since a 13-10 overtime victory over Texas in 2017.

OSU was favored by more than three touchdowns, but its offense struggled all day – in large part due to an early injury to starting quarterback Spencer Sanders – and racked up only 277 yards (one less than its in-state opponent). It wasn’t until late in the third quarter that the offense moved down the field and put the ball into the end zone.

True freshman quarterback Shane Illingworth entered the game with 2 minutes and 2 seconds left in the quarter. He was the third QB to take the field for OSU after starter Sanders left with a lower extremity injury in the first quarter and backup Ethan Bullock struggled in his two quarters of action.

Illingworth found star senior wideout Tylan Wallace for a 24-yard completion on his first college play. A few plays later, he threw a 36-yard pass to Wallace on the final play of the third quarter.

The Cowboys finally found the end zone on their first play of the fourth. Redshirt junior running back Chuba Hubbard powered in from three yards out to score the first OSU touchdown of the season. He gave OSU a 10-7 lead just seconds into the final quarter.

Hubbard finished the game with 27 carries for 93 yards.

"I thought our defense did an outstanding job on him,” Tulsa coach Philip Montgomery said. “I thought we did a really good job of running to the football, playing gap-sound and gang-tackling when we had opportunities.

"You've got to do a great job against Chuba, you just can't let him get started. I'm very proud of the effort, especially against a Heisman (Trophy) candidate. I think our defense did great."

Brown had a 50-plus yard touchdown run called back for offensive holding in the fourth quarter.

“I thought (Brown) ran more physical and determined today than he has in his career at Oklahoma State," OSU coach Mike Gundy said. “He has practiced really well. He has always worked hard, but over the last month he has looked a little different in practice.

"I wish I could give you a reason why, but he has practiced really hard and his attitude has been good. I thought he was a very physical runner today, and we’re certainly going to need him, so I’m excited about what he accomplished today.”

Illingworth finished his first game completing 4 of 5 passes for 74 yards. Redshirt junior Ethan Bullock was 8 of 13 for 41 yards and one interception – which was his last pass of the game before Gundy switched to the true freshman. Bullock was also sacked four times.

Sanders left the game in the first quarter after completing both of his passes for 23 yard. He was also sacked twice and ran for nine yards on five carries.

The Cowboys’ leading receiver was Wallace, who caught four passes for 94 yards – all in the second half. No other Cowboy had more than 17 yards receiving.

“Tylan was good all day, we just couldn’t get the ball to him early,” Gundy said. “Once we started going at him, he was fantastic and making plays.”

Tulsa missed a game-tying field goal on its ensuing drive after Hubbard’s touchdown. The 11-play, 67-yard drive ended in disappointment for the Golden Hurricane.

The Cowboys answered with its first of two drives in the fourth quarter that resulted in a field goal by redshirt sophomore Alex Hale. He hit field goals of 27, 29 and 40 yards.

On Tulsa’s final drive of the game, three penalties backed the Golden Hurricane up inside their own 15-yard line. On fourth-and-24, OSU blitzed and senior linebacker Malcolm Rodriguez sacked Tulsa quarterback Zach Smith at the 2-yard line, which set up Hale’s final field goal.

The Cowboys’ defense had a big game, holding Tulsa to 1 of 4 fourth-down conversions. The Golden Hurricane were 0 for 11 on their third-down attempts. Fifteen penalties for 120 yards also hurt the visiting squad.

“The third down stops stand out, obviously,” OSU defensive coordinator Jim Knowles said. “… That’s not only great effort, but it’s everybody being in the right place. The fact that we knew where to fit, what to do and how to defend in those critical situations really shows great maturity and great experience. I feel like that’s what really won us the game today.”

The lone turnover came on Tulsa’s final offensive play of the game. An interception by junior Kolby Harvell-Peel sealed the victory for the Cowboys. He picked off Zach Smith with 0:07 on the clock.

The Cowboys begin Big 12 Conference play at 2:30 p.m. next Saturday when West Virginia comes to town. The Mountaineers beat Eastern Kentucky, 56-10, last week in their lone nonconference contest of the season.