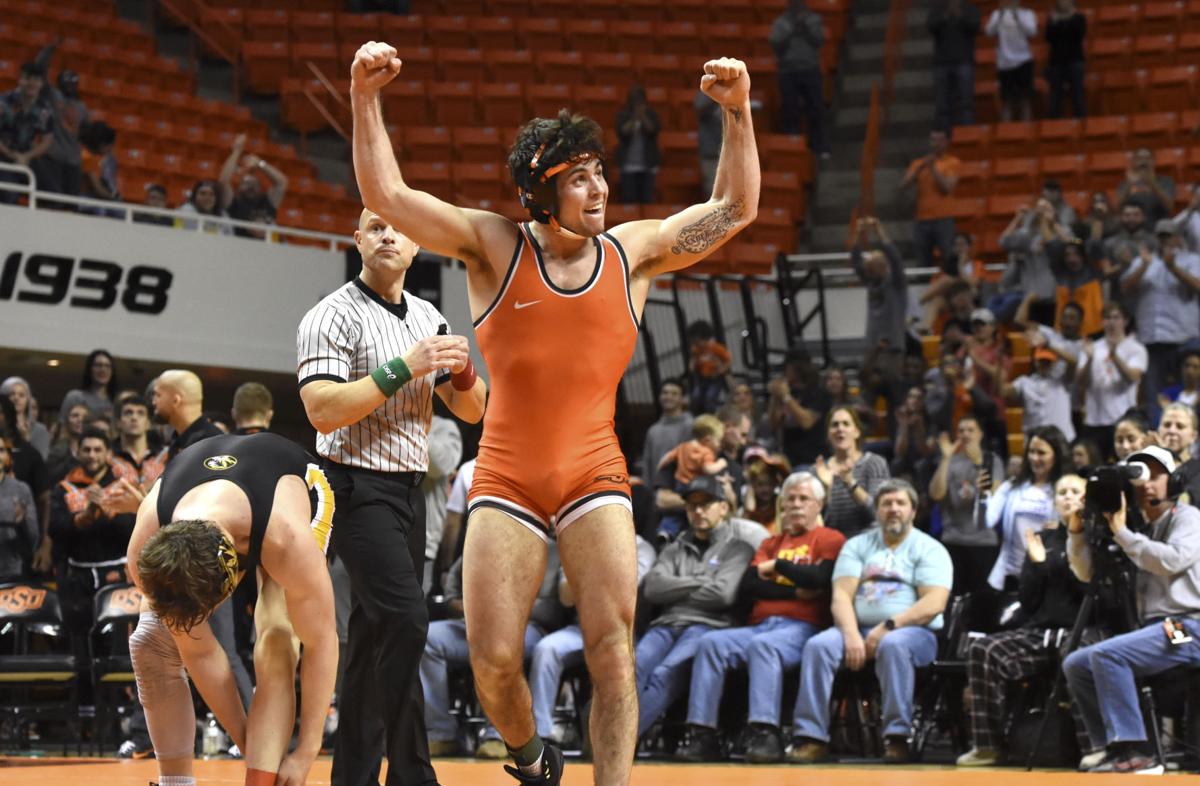 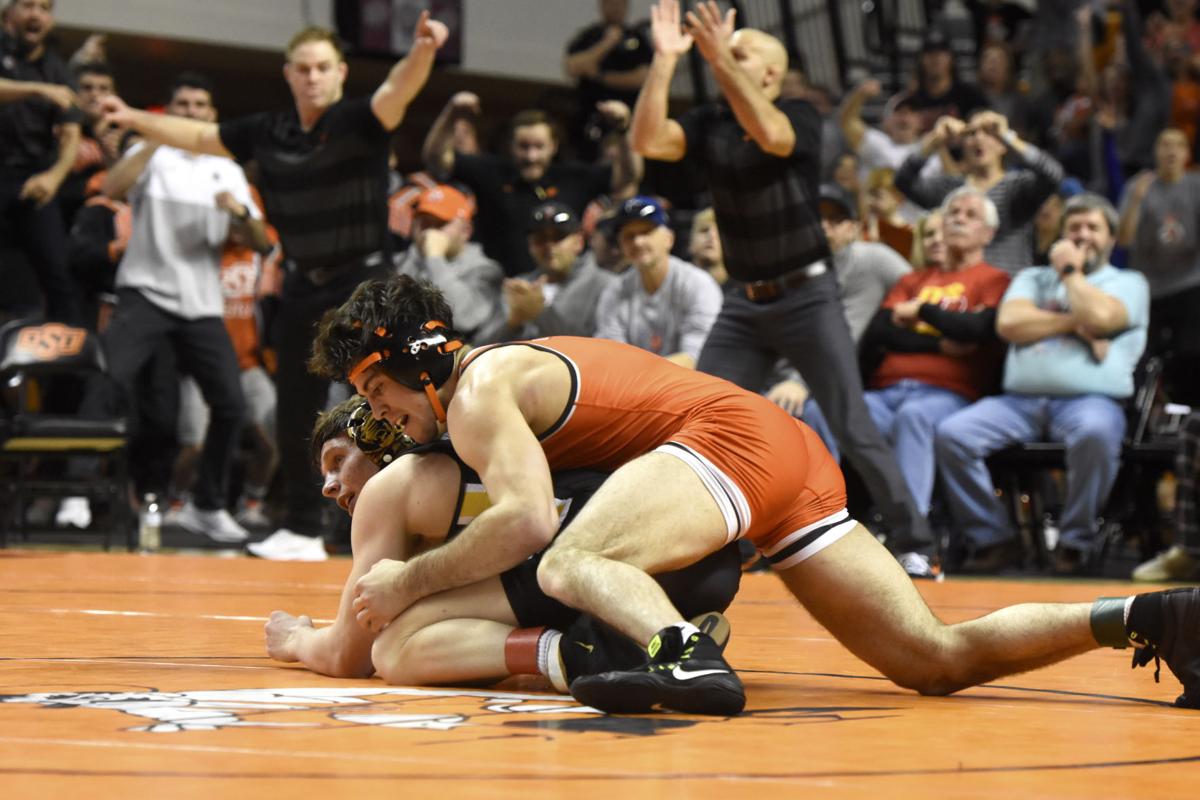 Wyatt Sheets escaped the grasp of Jarrett Jacques with just seconds to go in the third period, but still trailed by a pair of points.

A few seconds later, he scored a takedown, tying the match and forcing sudden victory overtime. In the tiebreaker round, the Oklahoma State redshirt sophomore 157-pounder took Jacques to the mat and clinched the victory.

It came one match after Boo Lewallen lost in sudden victory, suffering his first loss of the season and Missouri trimmed the Cowboys’ lead to two points.

“I thought I was going to have a stroke,” OSU coach John Smith joked. “This has always been a pretty good dual meet – a lot of battles over the years with Missouri. I’m not sure where their team is ranked nationally, but they’re definitely a team that has a lot of upside to them as they go into the postseason.

“The mistakes we normally make is with our intensity level and not closing the gap and not doing some things that I think only comes with confidence. I think I have a group of men that are trying to win matches when I’m looking for a little bit more.”

After a scoreless first period, Sheets scored an escape point from the down position before a Jacques takedown and another Sheets escape, tying the match at 2-2 heading to the third period.

Jacques escaped and later took down Sheets, taking a 5-2 lead. With time ticking down, Sheets escaped Jacques’ grasp, scored a takedown and rode Jacques out – eliminating a potential riding time bonus point by a few seconds.

Following a scoreless sudden victory round, No. 11-ranked Jacques scored an escape in the first tiebreaker. In the second, Sheets scored a tying escape point seconds before taking Jacques down and riding out the final few seconds as his coaches celebrated in the OSU corner and the home crowd applauded and cheered.

“It’s a great feeling,” Sheets said of the crowd’s reaction. “It’s what you come here for. It’s awesome.”

Smith was proud of Sheets for never giving up and having the willpower to be aggressive after falling behind by three points in the third period.

“It was a big win,” Smith said. “I thought Wyatt competed well. Sheets just kept coming, even when it looked like he was done, he would get an escape or a takedown. I love to see that.

"Everyone thinks we had just lost the match, and all of the sudden he’s up and out and hits a beautiful duck under and finishes him off in the overtime. It is good to see him make that adjustment and not stop. Wyatt won on pure will today.”

OSU followed with five-straight wins to close out the dual victory. At 165 pounds, redshirt freshman Travis Wittlake, ranked No. 8, defeated Peyton Mocco by decision, 11-6. No. 11-ranked redshirt senior Joe Smith beat Connor Flynn, 12-6, in the next match at 174 pounds.

Smith had to fight off his back early in the first period. He trailed 4-0 before an escape point, takedown and nearfall-2 gave him a 5-4 lead before the period ended. Flynn was awarded a penalty point, tying the match, but Smith responded with a takedown seconds later before the match ended.

At 184 pounds, redshirt freshman Anthony Montalvo scored a pair of takedowns and two reversals in his match against Dylan Wisman. Montalvo won by decision, 9-5.

The second sudden victory also scoreless, but Putnam rode out Bohlken in the next round. In the next 30-second period of the second tiebreaker, Putnam escaped and took the match, 3-2.

“It was ugly, but a win is a win,” Putnam said. “I really need to ride that confidence going forward. Hopefully, I’ll finish in three periods, instead of like seven. I’m looking forward to that.”

OSU and Missouri split the first four matches of the dual. No. 4-ranked redshirt senior Nick Piccininni (125) beat Cameron Valdiviez by tech fall, 20-5. Piccininni scored a pair of four-point nearfalls in the third period to clinch the bonus-point win.

At 133 pounds, Missouri’s Allan Hart scored a takedown, nearfall-4 and nearfall-2 in the first period. OSU freshman Reece Witcraft battled back, but lost 11-7.

OSU redshirt junior Dusty Hone put the Cowboys back on the winning side with a 9-3 victory at 141 pounds. No. 1-ranked Lewallen came up next against No. 5 Brock Mauller.

Lewallen, who entered the match 15-0, took an early 2-0 lead in the first period. Each wrestler scored an escape from the down position in the next two periods. Mauller earned a third-period takedown to force sudden victory, where he scored another takedown for the upset win.

“It was 3-0 in the second period, 3-0,” Smith said. “Going into the third, you’re up 3-0. In my house, nobody beats you. He got beat. He sat on the back of his heels and got beat. But again, I’ll say this, he hasn’t been in enough battle matches the last couple of years.

“That was a battle match that you need to go finish. You need to go score one more time and take them completely out of it, or score more in the second. But, it didn’t happen that way. I’ll tell you another thing I’ll remind him – we don’t ever get double-legged in overtime. We break down and we get our hips ready to go.”