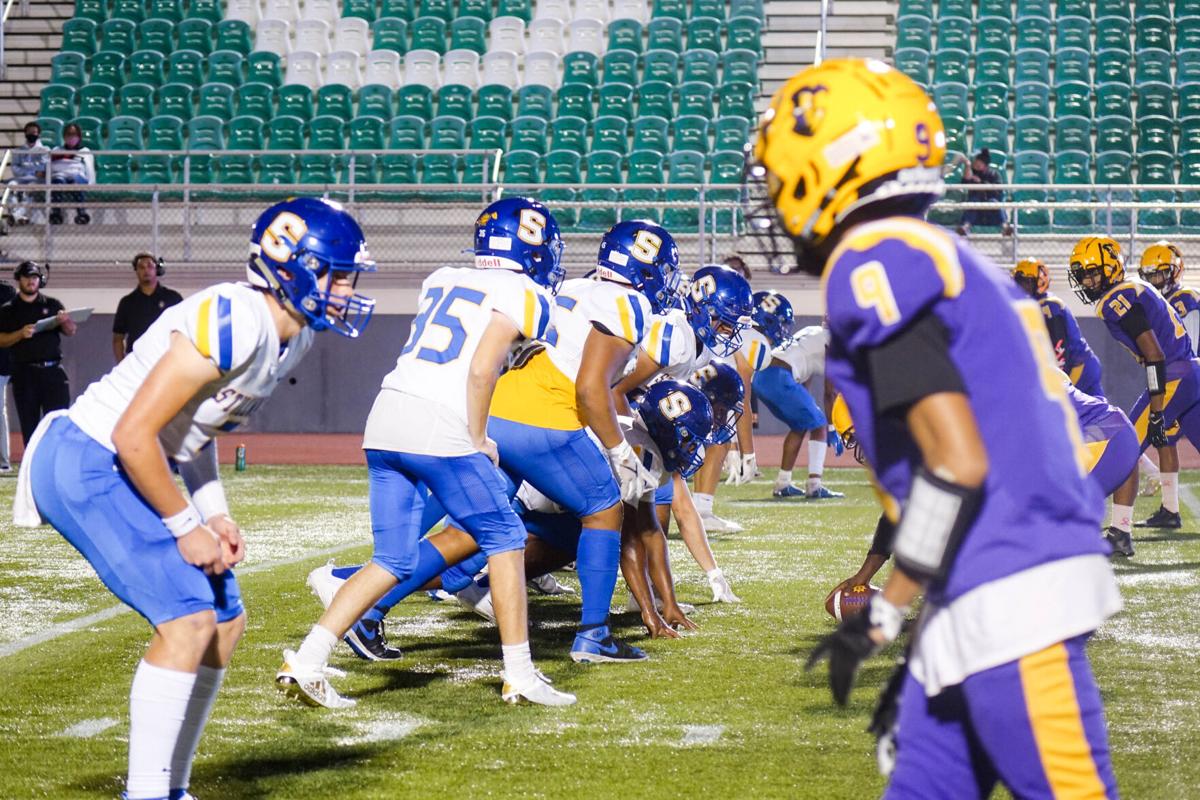 The Stillwater High defense lines up against Northwest Classen on Friday night at Taft Stadium. 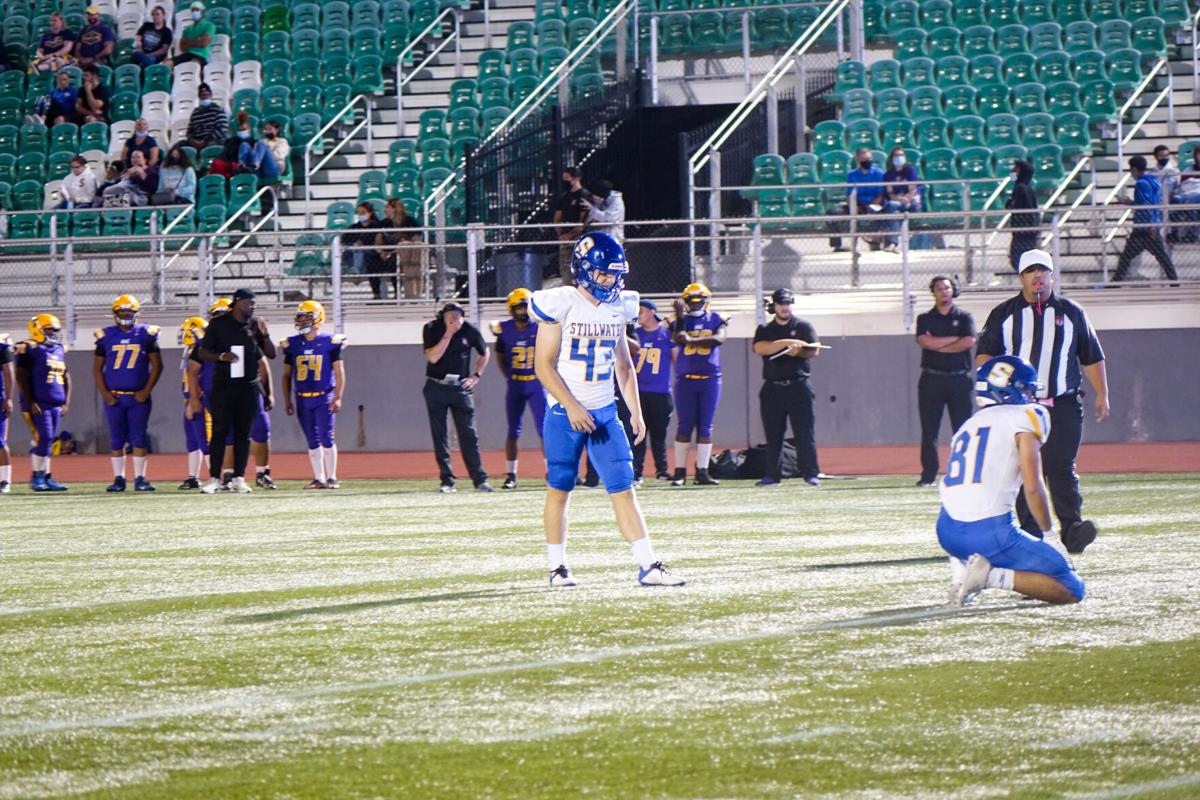 Chase Edwards prepares to kick a PAT in the first quarter of Stillwater's game against Northwest Classen. 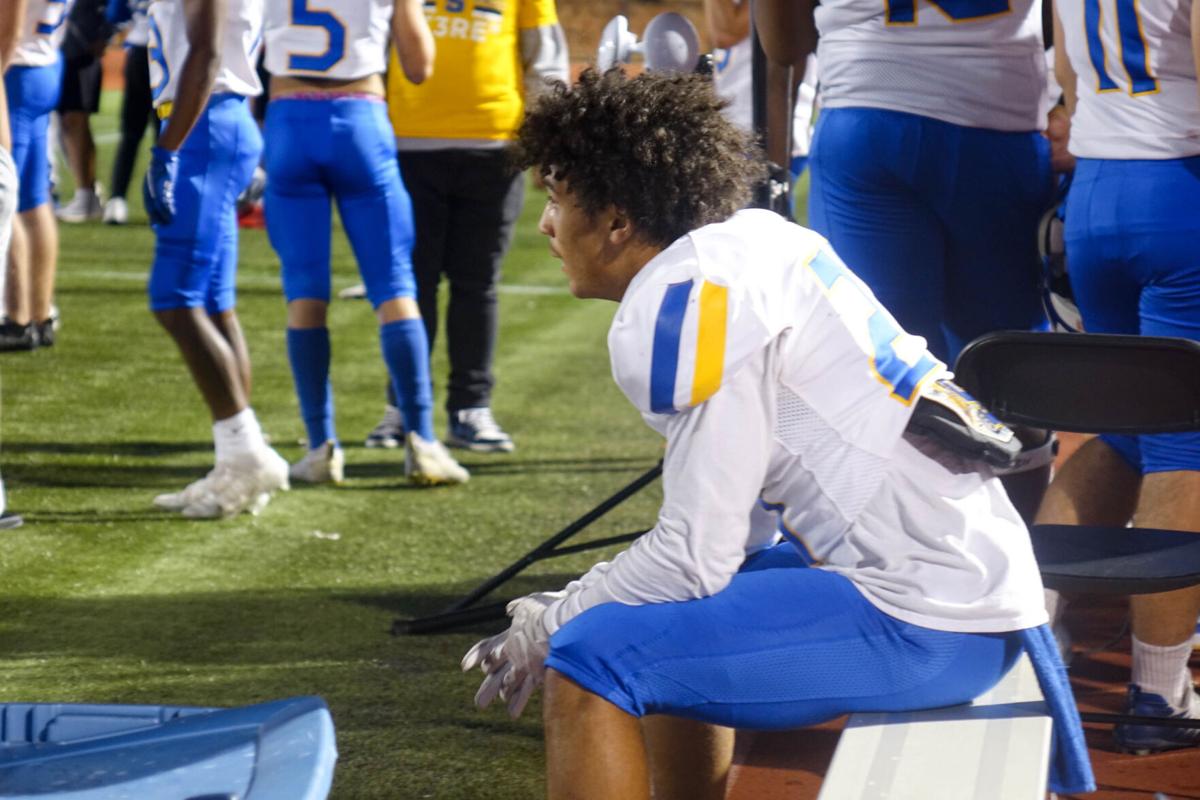 Receiver Mason Butler watches from the bench after scoring a touchdown during Stillwater's game against Northwest Classen.

The Stillwater High defense lines up against Northwest Classen on Friday night at Taft Stadium.

Chase Edwards prepares to kick a PAT in the first quarter of Stillwater's game against Northwest Classen.

Receiver Mason Butler watches from the bench after scoring a touchdown during Stillwater's game against Northwest Classen.

Tan Booth had a lightning-fast start to his varsity debut.

On the opening snap of the Stillwater High football team’s second half against Northwest Classen, backup quarterback Talon Kendrick handed the ball to Booth, and one carry was all he needed to create a highlight play. Booth, a freshman running back, took off and immediately rocketed into the end zone, adding to the colossal lead his seasoned teammates built before halftime.

Stillwater stormed past Northwest Classen 70-0 on Friday night at Taft Stadium, and the lopsided game gave the Pioneers plenty of opportunities to swap in backups for starters.

Sophomore Holden Thompson and junior Noah Roberts, who typically drive Stillwater’s run game, rested during the second half after each scoring an early touchdown. The Pioneers could have turned to backup tailbacks Cameron Johnson, Trey Gregory and Ondre Long, but they already had plenty of responsibilities – all three are starting at linebacker to fill in for unavailable teammates.

Instead of overextending the linebackers, coach Tucker Barnard opted for a different strategy: give the freshman a chance.

Booth typically practices with the ninth-grade squad instead of the varsity team. His name wasn’t even listed on the Pioneers’ roster, but by the end of the game, he had made his presence known.

“He’s got good vision and good balance, runs well,” Barnard said. “We’ve watched him as he was coming through the program, so we kind of had an idea.”

Booth’s introduction to competing under Friday night lights resulted in his 44-yard touchdown run, extending Stillwater’s lead to 56-0 at the start of the third quarter, and Kendrick continued to feed the ball to him. The Pioneers (6-2 overall, 4-1 Class 6A-II District 1) didn’t need to attempt any long pass plays when they had already secured their victory, so instead, they decided to see what Booth could do. He finished with 129 yards on 11 carries, including another touchdown rush for 15.

“He came down with us for a couple of days this week and practiced, probably for about 15 minutes for two different days,” Barnard said. “That’s one of the benefits of running the same offense all the way down. It wasn’t like we had to come teach him a whole bunch of stuff. He just needed some reps doing it with our guys.

“The ninth graders, they were kind of playful with it, calling him ‘big-time’ and stuff like that when he went back (to their practice).”

Preparing to face the winless Knights (0-8, 0-5), Barnard figured this could be the week for Booth to play in his inaugural varsity game. The Pioneers created his opportunity, jumping to a 35-0 lead in the first quarter. With a running clock before halftime, Stillwater breezed through the game in an hour and 30 minutes.

The Pioneers accumulated 225 rushing yards and only 44 passing yards, but the statistics don’t tell the story of the matchup. The offense rarely had to spend time on the field early in the game, instead relying on the defense to score or at least set Stillwater up for short offensive drives.

In the first quarter, senior cornerback Eli Williams grabbed an interception and then returned a fumble recovery 21 yards into the end zone. Less than a minute later, junior defensive back Garhett Reese delivered an 18-yard pick-six for the Pioneers.

With the high level of defensive production, starting quarterback Gage Gundy could afford to rest after providing the offense with its foundation. He went 2 for 2, finding Mason Butler and Ty Smithton for touchdown passes. Kendrick, who entered the game before halftime, added the last score of the game with his 4-yard scramble past the goal line in the fourth quarter.

While the Pioneers sent a freshman rusher into the game for the second half, the Knights depended on a first-year player from the beginning. Freshman Devon Wilkinson started at quarterback, going 9 for 14 with 28 passing yards.

Northwest Classen had brief glimmers of offensive production when Wilkinson connected with leading receiver Torrey Hobbs, but the stingy Pioneer defense prevented consistent progress. With the Knights’ small roster playing extended minutes while the Pioneers could make substitutions, the game was a mismatch in terms of depth.

Next, Stillwater faces Midwest City at 7 p.m. Thursday at home. As competition gets tougher, Booth might not receive another varsity opportunity this year, but some of the Pioneers’ positive takeaways can extend into future matchups. After recently struggling with penalties, they cleaned up their game against Northwest Classen, committing only two penalties for 25 yards.

“The nerves were probably not the same tonight as what they are in some other games,” Barnard said. “And that’s really a good indication that kind of tells you that a lot of that pre-snap penalty (issue) is anxiousness, anxiety, and most of the time, it’s a guy wanting to do his job and wanting to do it in a hurry and just jumps the gun. So tonight, when they’re relaxed and calm and confident, you don’t see that happening.”