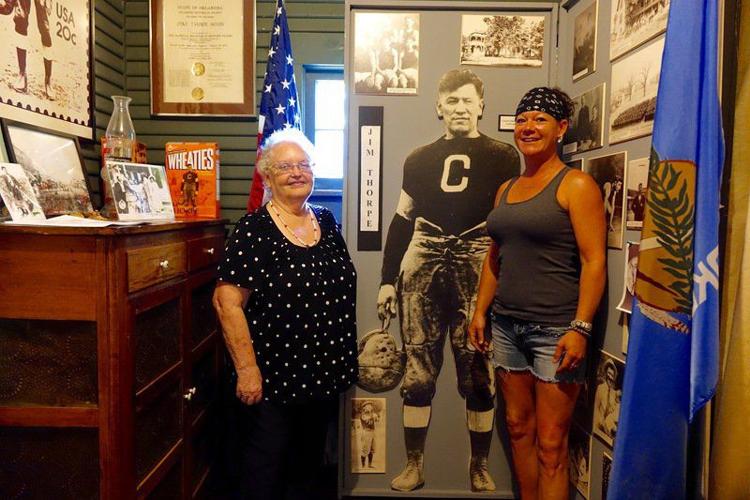 In this 2018 file photo, Linda Cleveland Frick, left, and Krystyn Kossakowski stand in Yale’s Jim Thorpe Home. Frick is president at Jim Thorpe Home, and Kossakowski is Thorpe’s great-granddaughter. Last month, the IOC reinstated Thorpe’s Olympic gold medals that had been stripped of him following the 1912 Olympic Games. 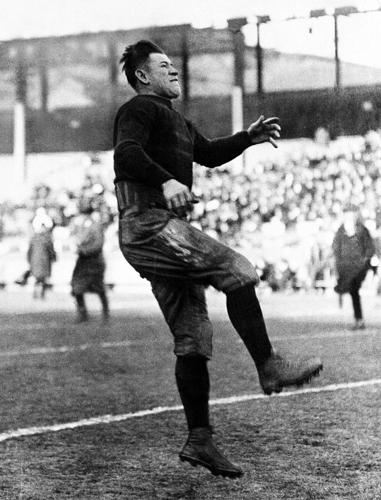 Jim Thorpe, a member of the Sac and Fox Nation, won the the decathlon and pentathlon championships in the 1912 Olympics. 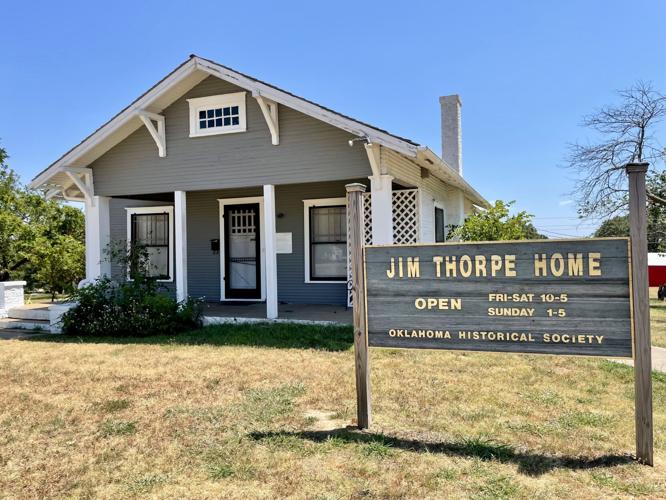 Famed athlete Jim Thorpe bought this house at 706 E. Boston Ave. in Yale for $2,800 in 1917 and lived there with his wife Iva and children until 1923. it's the only home he ever owned in Oklahoma. The Jim Thorpe Home was bought by the Oklahoma Historical Society in 1968 and placed on the National Register of Historic Places in 1971. A small museum located in the house is available for tour by appointment. 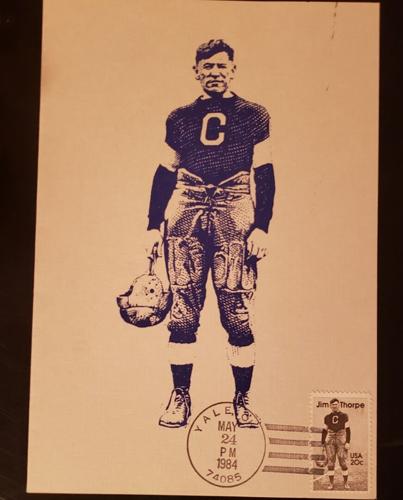 A postcard and a stamp feature images of Olympian Jim Thorpe, who excelled at multiple sports throughout his life.

In this 2018 file photo, Linda Cleveland Frick, left, and Krystyn Kossakowski stand in Yale’s Jim Thorpe Home. Frick is president at Jim Thorpe Home, and Kossakowski is Thorpe’s great-granddaughter. Last month, the IOC reinstated Thorpe’s Olympic gold medals that had been stripped of him following the 1912 Olympic Games.

Jim Thorpe, a member of the Sac and Fox Nation, won the the decathlon and pentathlon championships in the 1912 Olympics.

Famed athlete Jim Thorpe bought this house at 706 E. Boston Ave. in Yale for $2,800 in 1917 and lived there with his wife Iva and children until 1923. it's the only home he ever owned in Oklahoma. The Jim Thorpe Home was bought by the Oklahoma Historical Society in 1968 and placed on the National Register of Historic Places in 1971. A small museum located in the house is available for tour by appointment.

A postcard and a stamp feature images of Olympian Jim Thorpe, who excelled at multiple sports throughout his life.

Gail Lynn Hannon carries a compilation of her grandfather’s myriad of achievements.

If someone wants to learn about his life, then she gladly shares a copy. He excelled in numerous sports, from baseball to football to track and field. In 1912, as Hannon and her extended family know well, he solidified his status as “greatest athlete in the world” with gold medals in the pentathlon and decathlon at the Olympic Games in Stockholm, Sweden.

The family always acknowledged the truth: Jim Thorpe placed first in both events. But for more than a century, the International Olympic Committee didn’t recognize this.

On July 15, the IOC made a revision that finally returned the distinction to the late Thorpe, who owned a home in small-town Yale and lived there with his first wife and children. The committee announced Thorpe, a member of the Sac and Fox Nation, would be reinstated in Olympic records as the standalone winner of the 1912 pentathlon and decathlon.

“I thanked everybody for all their work and time and wonderful effort to get this accomplished,” said Hannon, who lives in Florida. “And I am in awe that people still care so much about him.”

At 84, Hannon has seen people celebrate her grandfather’s athletic legacy, but she knows others have overlooked and understated it. The road to Thorpe’s Olympic recognition required great effort from family members and activists while the record books didn’t accurately reflect his achievements for nearly 110 years. Gail Hendrix, Thorpe’s great-granddaughter who lives in Yale, called it “the longest competition in Olympic history.”

Kossakowski, Hendrix’s brother, pointed out how the prolonged process extended through generations. It’s a posthumous honor for Thorpe, who died in 1953, and his daughter Gail, who advocated for restoration of his records until her death in 2005.

In the 1980s, the situation was partially rectified when the IOC named Thorpe a co-champion and presented replica gold medals to his descendants, but it was an incomplete correction.

Kossakowski was a child then. Now, almost 40 years later, the records are fully amended.

“(Thorpe’s) children have all passed, and now you’re going to be talking to grandchildren,” Kossakowski said. “I’m a great-grandchild of his, so this is a long, long process, and I’m so thankful that they finally got his record put back in as the sole winner.”

The controversy began in 1913, when the IOC stripped Thorpe of his medals because of the discovery that he had briefly received pay for playing minor-league baseball. At the time, this infringed on the Olympics’ stringent amateurism rules.

In 2012, Sally Jenkins of Smithsonian Magazine wrote about the unfairness of his disqualification.

“Countless white athletes abused the amateurism rules and played minor-league ball with impunity,” Jenkins said. “What’s more, the IOC did not follow its own rules for disqualification: Any objection to Thorpe’s status should have been raised within 30 days of the Games, and it was not.”

When Thorpe, the United States’ first Native American gold medalist, competed in the Olympics, the government didn’t even recognize Indigenous people as citizens. This was 12 years before the passage of the Indian Citizenship Act.

Hannon said her grandfather dealt with instances of racism, but she does not cite prejudice as the reason for the delays surrounding his record reinstatement.

She and Kossakowski said they have no idea why it took so long. Maybe, Hannon theorized, it dragged on because of ignorance: much of the public isn’t informed about the extent of his success, so naming him the sole gold medalist hadn’t been a priority.

“It’s a shame,” Hannon said. “… They don’t realize all that he did, all that he accomplished, all the sports he was involved in. He was just the most beautiful natural athlete ever.”

Is it too late for society to give him due credit? Hannon said she thinks “we’ve lost the greatest athlete of all time” and many people will not know who he was. Well-known publications have sometimes excluded him from honors and conversations about the world’s best athletes.

But at least 75,936 people are invested in making sure Thorpe’s accolades are not forgotten.

That’s the number of signatures on the petition “Help Correct the Olympic Records & Return Jim Thorpe’s Wins,” featured on the Bright Path Strong website. Bright Path Strong is a nonprofit organization with a title that alludes to Thorpe’s name Wa-Tho-Huk, which translates to “Bright Path.” Honorary board members include Thorpe descendants Mary Thorpe, Teresa Thorpe and Anita Thorpe; and multiple tribal partners are listed on the group’s website, working to preserve his legacy and “share and amplify authentic Native American voices and stories, past and present.”

Krystyn Kossakowski, Thorpe’s great-granddaughter who lives in Stillwater, said it was awesome to see supporters faithfully working to bring about change using the petition. It features comments from signees across the United States and beyond.

“I just think his story alone is so incredible,” Krystyn said. “I think it just really strikes a chord with a lot of people, especially Native Americans and people in the sports world.”

The narrative of Thorpe’s life transcends sports, carrying a message of perseverance in the face of adversity and grief. As an adolescent, he dealt with tremendous loss. His twin, Charlie, died at age 9, and by 16, Thorpe had lost both of his parents.

“Jim Thorpe endured a lot of challenges in his life,” Jim Kossakowski said. “Being Native American brought some additional challenges to that, especially in the early 1900s there.

“… He overcame every challenge he ever faced and did it with class and dignity.”

Buoyed by a stellar career at Carlisle Indian School, Thorpe widely established himself as the GOAT – aka greatest of all time – long before the acronym was coined and sports fans intensely debated who was worthy of the title. When Thorpe won the decathlon in 1912, King Gustav V of Sweden famously declared, “Sir, you are the greatest athlete in the world.”

Thorpe’s pursuits were eclectic. He served as the inaugural president of the American Professional Football Association (which morphed into the NFL), played Major League Baseball and even won a ballroom dancing championship.

To Hannon, Thorpe was a kindhearted grandfather.

Hannon said she met him in Chicago after World War II, when she was no older than 8 or 9. Although she knew him as a family member, she also sensed something extraordinary about his life. She recalled a childhood memory from North Carolina when, while her family arrived home, burglars escaped out the back door, smuggling some of Thorpe’s memorabilia. Although it was a startling moment, it illustrated the value of those possessions.

“That was the very beginning of my realization that, ‘Gee, my grandpa was famous,’” Hannon said.

Despite his celebrity status, Thorpe remained personable and approachable, taking time to play football with kids in Yale. His descendants share not only his love for sports, but also his unpretentiousness.

“We’re a normal family, and it’s not like we came into big money or anything like that,” Krystyn said. “It’s (about) restoring his name, and we’re so honored for everything that he’s done. He deserves it, and I think we all fought really hard to make sure that that happened.”

The family of Sweden’s Hugo Wieslander, who became the decathlon gold medalist when the IOC took Thorpe’s medals, was on board with the mission. According to an Associated Press article, the IOC said it was confirmed that “Wieslander himself had never accepted the Olympic gold medal allocated to him, and had always been of the opinion that Jim Thorpe was the sole legitimate Olympic gold medalist.”

The Swedish Olympic Committee, as well as the Norwegian Olympic and Paralympic Committee and Confederation of Sports – pentathlon runner-up Ferdinand Bie was Norwegian – concurred, per the AP.

Since the announcement in July, Thorpe’s descendants have rejoiced. Krystyn said people in Stillwater have congratulated her, and the news has circulated throughout the family.

The mission to preserve and highlight Thorpe’s legacy continues. James Kossakowski said he has never seen the original medals, and he would like for them to be presented to the family.

“Hopefully, my mom and her are standing next to each other and just smiling, saying, ‘I wish I could be down sharing this with my family,’” Jim Kossakowski said. “They worked so hard, so many years for this, and I only wish they could be here to see it happen.”