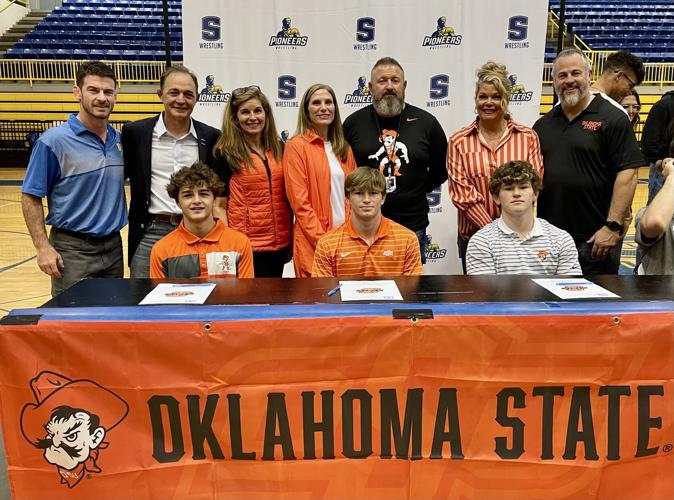 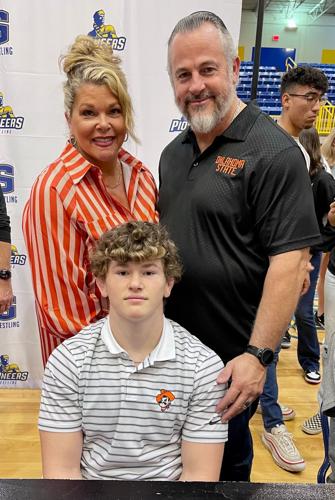 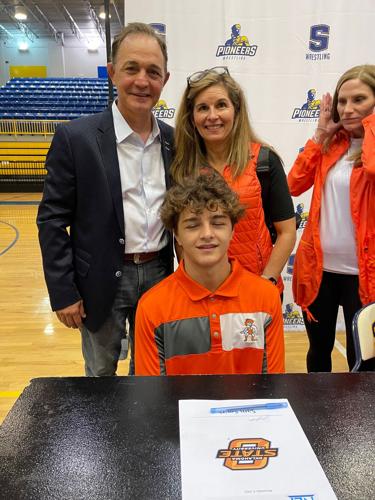 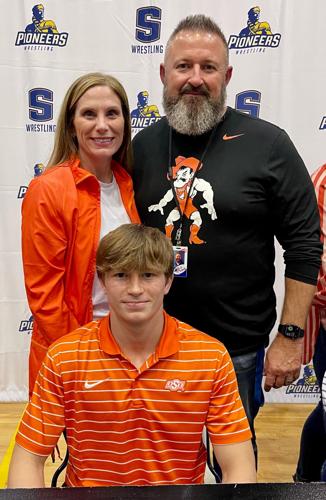 Sam Smith cracked a smile when he was told the stat, but he already knew it all too well.

When he signed his official Letter of Intent with Oklahoma State on Wednesday, he became the ninth member of the legendary wrestling Smiths family to join the winning program in college athletics.

“It’s really cool to be a part of something like that,” Smith said. “I think about it a lot.

“It’s been cool. It’s been inspiring watching (family) while they were in the program. I’ve always kind of wanted to work towards that, so I’m excited for it.”

He was one of three Stillwater High wrestlers to fulfill a dream Wednesday by signing with Oklahoma State wrestling.

Sitting in the middle of the trio of Pioneers was the top-rated recruit of the bunch in three-time state champion Cael Hughes, who is considered a top 25 wrestler and projected to wrestle at 133 pounds – making him the potential heir apparent to three-time NCAA finalist Daton Fix.

“I’ve worked all my life for this, pretty much,” Hughes said. “Being in Stillwater, it’s always a wrestler’s dream to wrestle for the Cowboys. So it just feels really good to finally get it signed.”

But for him, growing up in Stillwater – when his family moved around 10 years ago as his father, Jeremy Hughes, became an assistant football coach and assistant wrestling coach – the dream is bring an end to the national championship drought at the team level.

He watched former Pioneers like longtime residents Joseph Smith and Kaid Brock win state titles – both individually and as a team – for Stillwater and carry similar aspirations up to the college campus.

“That’s kind of the goal for all us, is to end up there and do the same thing that we’re doing here (Stillwater High) in winning,” Hughes said.

New to the Stillwater wrestling room is two-time Oklahoma state champion, AJ Heeg, who will look to win his first team title with the two-time defending Class 6A state champions.

Heeg, who wrestled at Edmond Memorial the past two years after moving from Illinois, flipped his commitment from Oklahoma to Oklahoma State late in the process. Having already moved to Stillwater before making that change, he said he is happy to be able to get a lay of the land before starting his college career.

The trio are just the start of what could be a lengthy line of top talent to transition from Stillwater High to Oklahoma State, with several multi-year state champions or state finalists who are underclassmen within the program.

Though Stillwater’s third-year wrestling coach Ethan Kyle has only known Hughes and Heeg for a short while, being a former Cowboy wrestler himself, he has known Sam since Kyle’s college years. Kyle has gone from being coached by John Smith at Oklahoma State, to coaching John’s son at the high school level.

“It is very special for me,” Kyle said. “The Smiths have had a huge impact on my life, and I’m sure they will for a long time. … So it’s really special, it’s really unique and it’s fun to be a part of it.

“Makes being a coach and a teacher – working hard all the time – really pay off when you get these kinds of experiences.”

The entire list of this year’s recruiting class hasn’t been finalized as the paperwork must make its way to the athletic department to make it official, but several of those athletes did get their Letters of Intent on the first day of the signing period.

The most notable of the signees is Christian Carroll, who is considered the No. 1 pound-for-pound wrestler in this senior class. And most importantly for the Cowboy program, he is a heavyweight – a position that the staff has struggled to secure top-tier talent and had to bulk up lighter wrestlers to the weight recently.

Carroll had originally committed to Penn, but flipped to the Cowboys just a few days before Wednesday’s signing period.

“He’s won a lot of matches, very competitive,” Smith said of the Indiana native on Wednesday. “Everything you see about him is really good. He’s a really stable kid, very mature from the standpoint of just things he wants to do and wants to accomplish.

“It was fortunate. I think we did our homework – my staff – and in the end, had a second opportunity to get him and we did that.”

Also already inking is Bixby’s Jersey Robb, who is considered a top 70 overall recruit by most wrestling recruiting sites.

Robb is a two-time state champion, three-time finalist at the Oklahoma high school state tournament. He is projected at a 197-pounder for the Pokes.

The Cowboy coaching staff had to sweat into the night for one other big commitment.

Brayden Thompson of Illinois finally got his paperwork in after dinnertime. He is considered a top five pound-for-pound recruit who was a member of the Junior World Team. He is projected to be a candidate for 174 pounds for the Pokes.