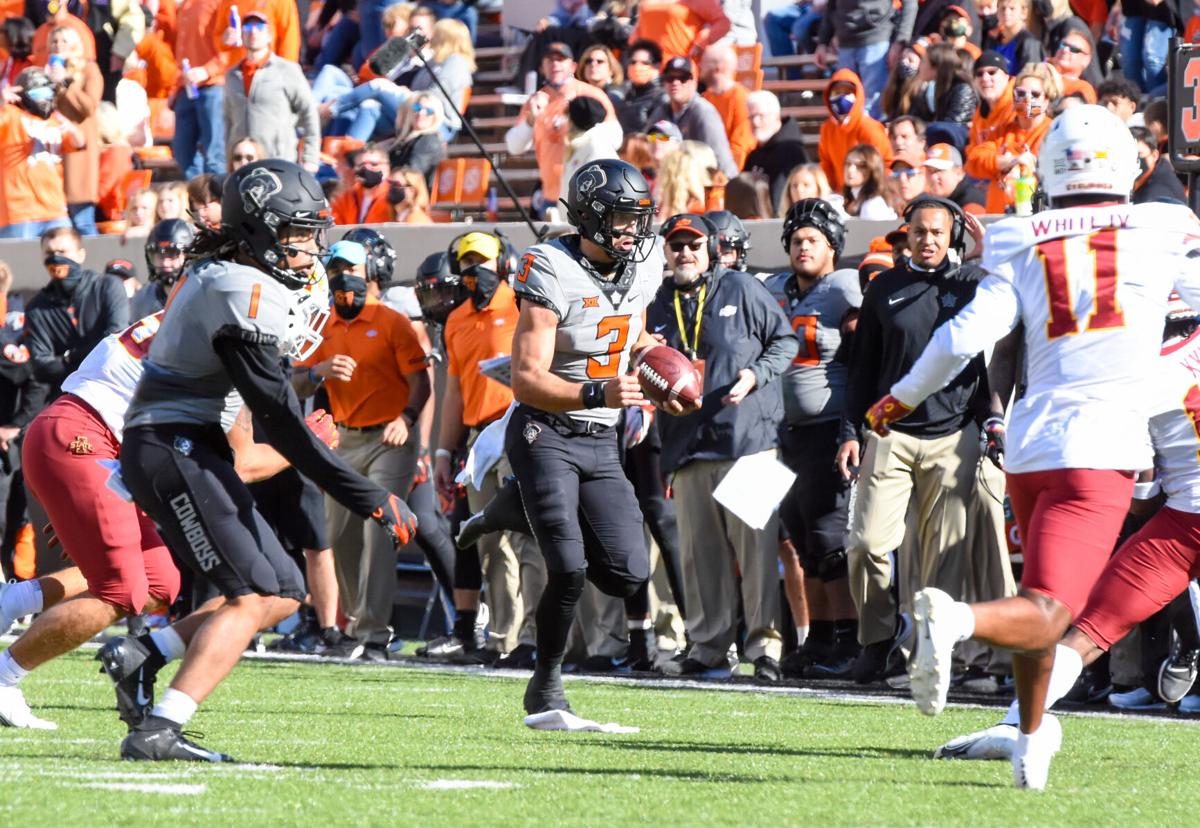 Jason Elmquist/Stillwater News Press Oklahoma State quarterback Spencer Sanders (3) scrambles for a run in the first half of a college football game against Iowa State on Saturday, Oct. 24, 2020, in Stillwater, Oklahoma. 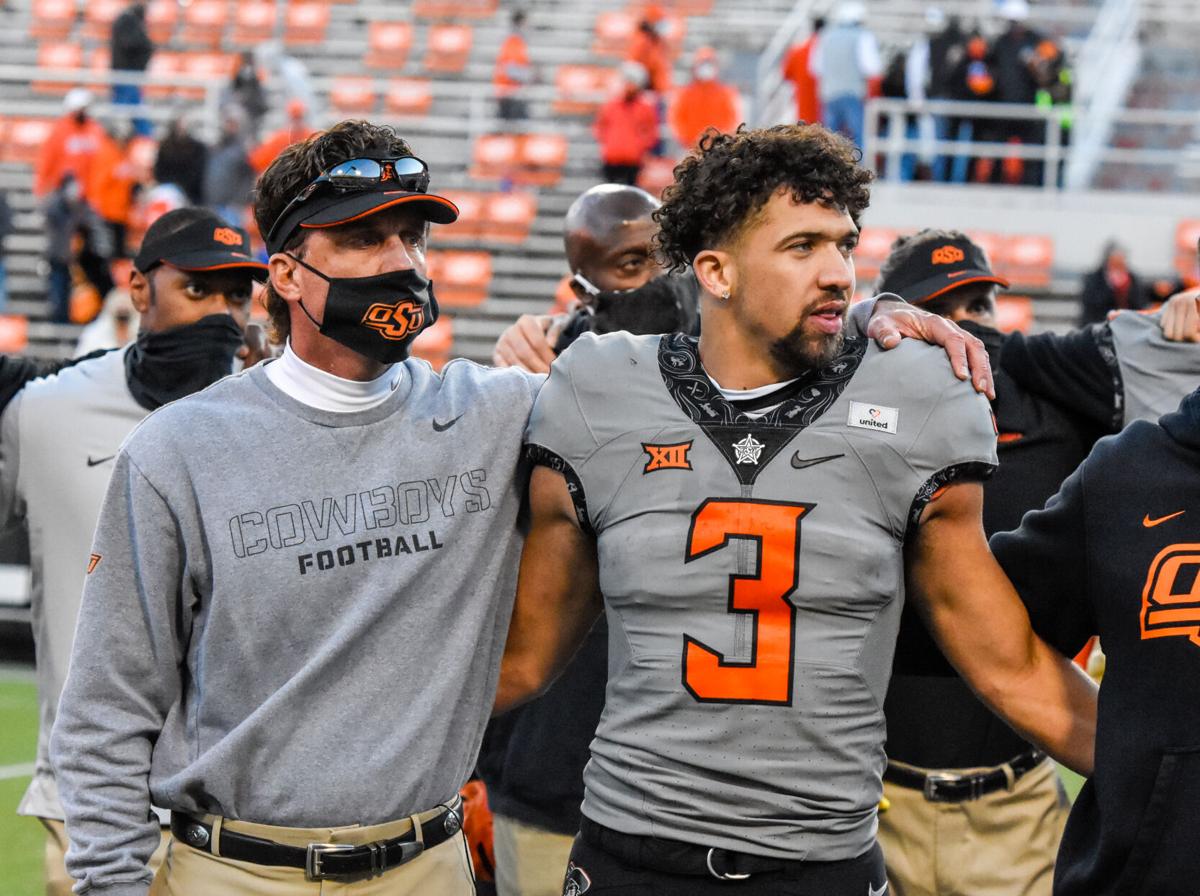 Baylor announced Thursday it was temporarily closing its football facility due to COVID-19 positive tests, but it still hopeful to host Oklahoma State on Saturday.

Jason Elmquist/Stillwater News Press Oklahoma State quarterback Spencer Sanders (3) scrambles for a run in the first half of a college football game against Iowa State on Saturday, Oct. 24, 2020, in Stillwater, Oklahoma.

Baylor announced Thursday it was temporarily closing its football facility due to COVID-19 positive tests, but it still hopeful to host Oklahoma State on Saturday.

Oklahoma State is returning to Florida for a bowl game.

The Cheez-It Bowl, formerly known as the Camping World Bowl, selected the Cowboys to square off with the Miami Hurricanes at Camping World Stadium in Orlando, Florida. The game is scheduled for Dec. 29, with kickoff at 4:30 p.m. Oklahoma State played in the bowl in 2017, with the Cowboys beating Virginia Tech 30-21.

“We’re excited about getting together as a group and having another week or so of practice, and being able to spend some time over Christmas with the families and then head out and play in a great bowl game against an awesome opponent,” Cowboy coach Mike Gundy said. “… We’ve been able to play some really good football teams, and I’m excited about competing against Miami.”

Playing in the Cheez-It Bowl was made possible by Oklahoma’s victory over Iowa State in the Big 12 Championship on Saturday. With the Sooners winning the league title, they locked up a spot in a New Year’s Six Bowl and the Cyclones – which only lost to OU by six – remained ranked high enough to earn an at-large bid for the Fiesta Bowl among New Year’s Six games.

With the league officially landing two in New Year’s Six Bowls, Texas – which has the head-to-head over Oklahoma State – earned the Alamo Bowl bid with the first pick of Big 12 teams following the big bowls as picked by the College Football Playoff committee. The Cowboys were them claimed by the next bowl in order by Big 12’s order, which was the Cheez-It Bowl.

Miami has an 8-2 record, its only two losses being to Clemson – which earned a College Football Playoff spot – and North Carolina, which earned a New Year’s Six bid.

The program is coached by Manny Diaz, who has a bit of familiarity with Oklahoma State and Big 12 offenses.

In the early stages of the league moving toward the now familiar spread offense, Diaz was a defensive coordinator for the Texas Longhorns in the final three seasons of the Mack Brown era from 2011-13.

“What was going on in the Big 12 almost a decade ago, as crazy as it sounds, is almost what’s now taking over all of college football,” said Diaz, who was part of a UT program that went 2-1 against Oklahoma State while in Austin. “I think coaches like Coach Gundy were on the cutting edge of the spread offenses, the RPO game, certainly, and making life very difficult on defenses, and I think that’s now such a part of college football that we almost forget how it all started.”

The Hurricanes have been led by quarterback D’Eriq King, who transferred from Houston. The danger he would present for the Oklahoma State defense is his dual-threat athleticism.

While throwing the ball, King is completing 64 percent of his passes with 22 touchdowns and just five interceptions. But on the ground, he leads Miami with 520 yards rushing with four touchdowns.

“D’Eriq has given a lot of people a problem, but again, it comes back to balance,” Diaz said. “We’ve got to run the football, and you got to be able to complete the passes that are there, because Oklahoma State does like to challenge and get in your face in their pass defense. So, I think our offense will have to play well to be able to move the ball on Oklahoma State.”

The tailbacks behind King haven’t been nearly as effective running the ball, using just two running backs and neither having at least 300 yards – Donal Chaney, Jr. has carried the ball 62 times for 272 yards, and Jaylan Knighton rushing 52 times for 209 yards.

On defense, Miami has been good at getting to the quarterback with a combined 29 team sacks. However, just like last year’s bowl game, the Cowboys won’t have to face the opponent’s leader in sacks, with Jaelan Phillips, who has eight sacks which ranks 23rd among all FBS individuals, has opted out of the bowl to prepare for the NFL Draft.

“Obviously a guy like Jaelan is not going to be easy to replace, but you do recruit, you do develop and there are players that do have the ability to step in and make some things happen,” Diaz said. “… That’s just part of what bowl games are right now, it gives us the opportunity for a next man up type of situation, and I think those guys will be excited for the challenge.”

There is still some question marks surrounding if Oklahoma State might also have another player opt out of the bowl.

The Cowboys have already had three NFL prospects declare they were going to begin getting healthy in preparation for the draft prospect in Teven Jenkins, Chuba Hubbard and Rodarius Williams, but Gundy is waiting to hear if Tylan Wallace will be back for one more game in orange and black.

“I haven’t had the discussion at this point, our players coming back (Sunday evening),” Gundy said. “… I’m hoping that we’ll know something (Monday) on what his situation will be. I feel like that he’s relatively healthy, in my opinion, but will know a lot more about that tomorrow. And that’s just a matter of whether he decides to play in the game. These decisions are all obviously based on the individual though process, but he’s competed for us throughout the year and he’s been fantastic.”