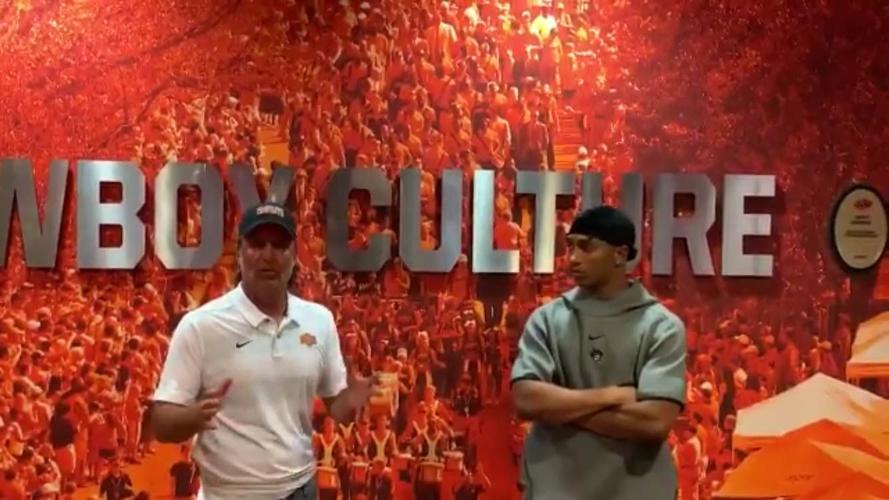 A screen grab from a video tweeted by Chuba Hubbard. OSU head coach Mike Gundy, left, and Hubbard made the video in response to a tweet by Hubbard that questioned a photo with Gundy wearing an OAN T-shirt. 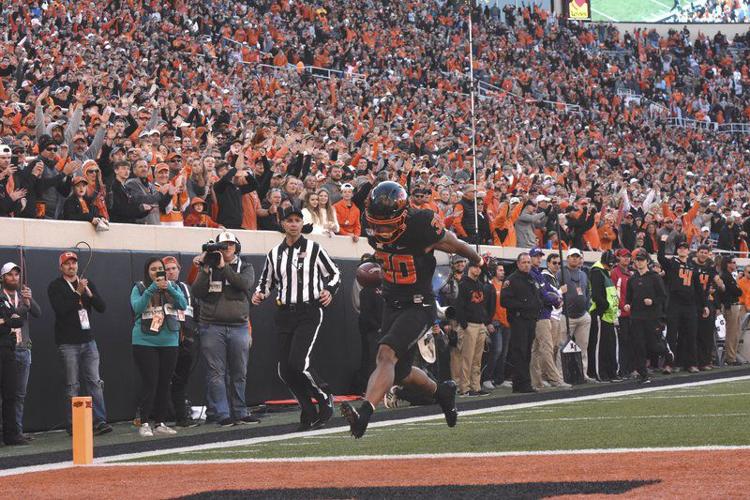 A screen grab from a video tweeted by Chuba Hubbard. OSU head coach Mike Gundy, left, and Hubbard made the video in response to a tweet by Hubbard that questioned a photo with Gundy wearing an OAN T-shirt.

One of Oklahoma State’s top returning players sent shockwaves through Twitter on Monday afternoon by responding to a photo of OSU football coach Mike Gundy.

OSU running back Chuba Hubbard, who is the nation’s leading returning rusher, tweeted this: “I will not stand for this. This is completely insensitive to everything going on in society, and it’s unacceptable. I will not be doing anything with Oklahoma State until things CHANGE.”

I will not stand for this.. This is completely insensitive to everything going on in society, and it’s unacceptable. I will not be doing anything with Oklahoma State until things CHANGE. https://t.co/psxPn4Khoq

Hubbard was responding to a photo of Gundy wearing an OAN shirt. OAN (One America News Network) is a far-right, pro-Trump cable channel that has notoriously opposed the Black Lives Matter movement – including one commentator, Liz Wheeler, who called the movement a “farce.”

The photo was tweeted Monday, and in the photo Gundy is seen standing by his two youngest sons on a fishing trip to Lake Texoma. It was posted on the Facebook group Capt Steve Barnes Lake Texoma Striper Fishing Guide on June 10.

Back in early April when on a media teleconference call – the same call in which Gundy made national waves for stressing the importance of his football players returning to the field in order to pump money into the economy in the state – Gundy mentioned he had begun watching OAN in the early stages of the COVID-19 pandemic.

“It was so refreshing. They just report the news, there no commentary,” Gundy said. “There’s no opinions on this – there’s not left, there’s no right, they just reported the news. And I’ve been watching them last week because they are giving us the news, giving us more information, in my opinion, some of the positives coming out. So that was refreshing.”

In the video, OSU wide receiver Dillon Stoner says, “Racism is a product of ignorance. We’ve seen that a lot lately in the broken world that we live in.”

Other teammates of Hubbard came to his defense via Twitter. Linebacker Amen Ogbongbemiga quote tweeted Hubbard, saying “I stand with him!”

Another wide receiver, Braydon Johnson, also came to Hubbard’s defense. He tweeted “I stand with you my brotha. I refuse to keep feeling the uncomfort. This is bigger than football.”

A third OSU wide receiver tweeted Monday evening. Dillon Stoner quote tweeted Hubbard, saying “Proud of my brothers for standing up in what they believe. I will always support and stand with my brothers and teammates.”

Fellow offensive lineman Bryce Bray was another Poke who responded to Hubbard. He said, “We all stand together as one!”

Defensive end Tyler Lacy said, “I stand with my brothers.... don’t love me in a jersey if you not going to stand for my beliefs... This isn’t “The Cowboy Culture” we preach about!”

“I hear and respect the concerns expressed by our Black student-athletes. This is a time for unity of purpose to confront racial inequities and injustice. We will not tolerate insensitive behavior by anyone at Oklahoma State,” Hargis said.

“This afternoon has been very disturbing. The tweets from the current and former players are of grave concern,” Holder said.

Several former OSU athletes came out in defense of Hubbard and also against the OSU football program and coach.

Taylor received a reply from Eric Henderson, the defensive line coach for the Los Angeles Rams who served as a graduate assistant under Gundy from 2013-15, with a “(Hell) no he’s not straight.” In the same thread, Henderson tweeted, “a lack of social awareness! Unbelievable” as well as a segment of a tweet that read, “Very intentional, can’t keep giving the benefit of doubt, especially when it’s a consistent matter!”

Another former player who tweeted out in response to Hubbard was Trace Clark. He said, “I’d say I’m not proud to have played for this man except I never played for him. I played for my brothers next to me with their hands in the dirt. The guys who left it all on the field with me. Gundy was never more than a figurehead for the media anyways, not a coach.”

Hubbard sent out a video later in the evening with he and Gundy addressing the day’s events on social media, with Hubbard apologizing utilizing his platform on Twitter to address his concerns.

Change is coming I promise you that. pic.twitter.com/wTGHtByh3N

“I’ll start off by first saying that I went about it the wrong way by tweeting,” Hubbard said. “I’m not someone that has to tweet something to make change, I should have gone to him as a man, and I’m more about action.

“So that was bad on my part. But for now on, we’re going to focus on bringing change, and that’s the most important thing.”

Gundy started off the video by mentioning that he met with several players to discuss the photo of the Cowboy coach wearing the specific shirt.

“In light of today’s tweet with the T-shirt I was wearing, I met with some players and realize it’s a very sensitive issue going on today in society,” Gundy said. “So we had a great meeting and was made aware of some things that players feel like can make our organization and our culture even better than it is here at Oklahoma State.

“And I’m looking forward to making some changes, and it starts at the top with me. And we’ve got good days ahead.”

Following the release of the video, with a mix of reactions replying to his tweet, Hubbard wrapped up with a follow up message.

“No don’t get it twisted. Foots still on the gas,” the tweet read. “Results are coming. It’s not over.”

He tweeted out, “ONLY the real know, since they let my dawg wear his durag in the video, a CHANGE is DEFINITELY coming!”