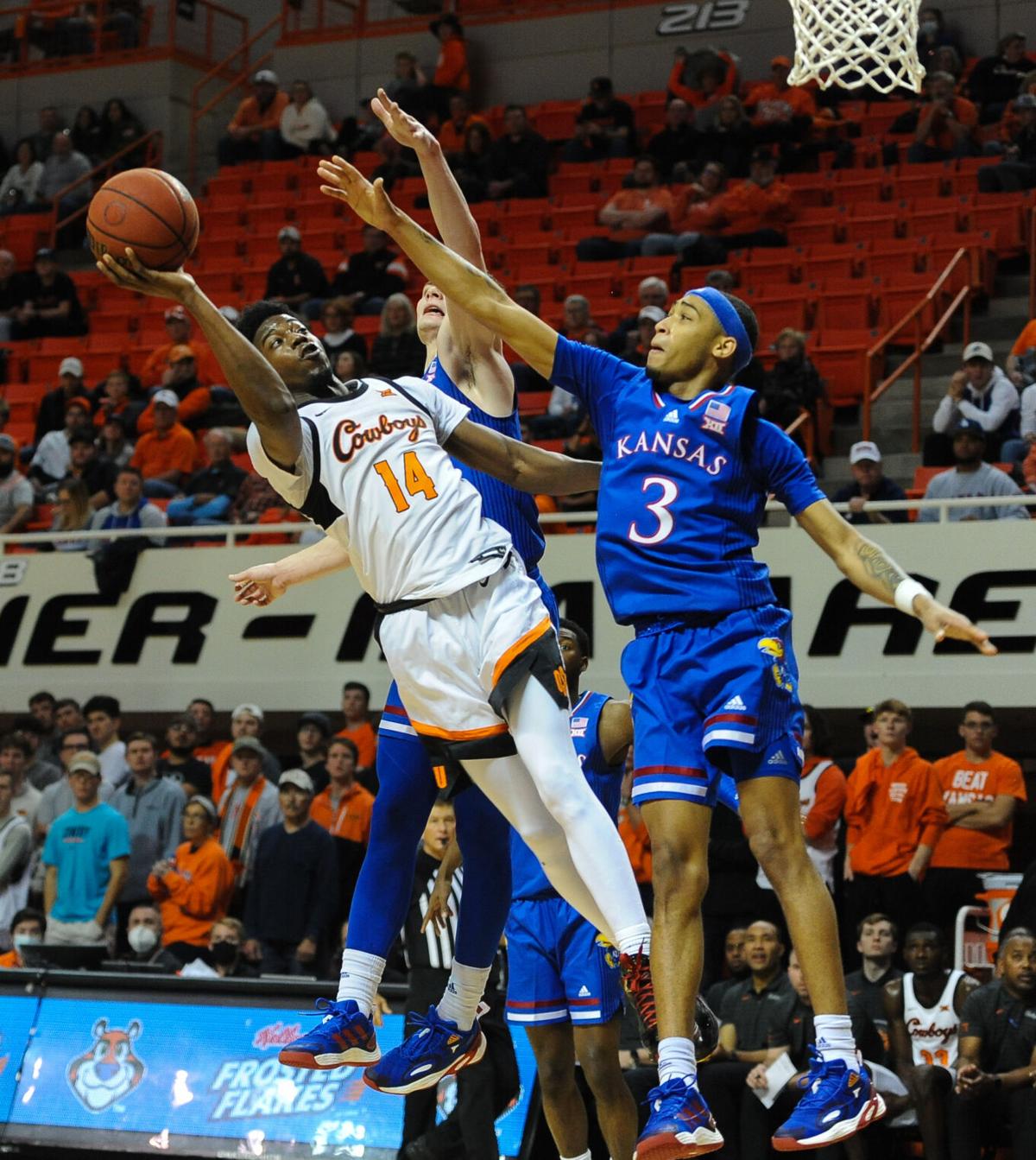 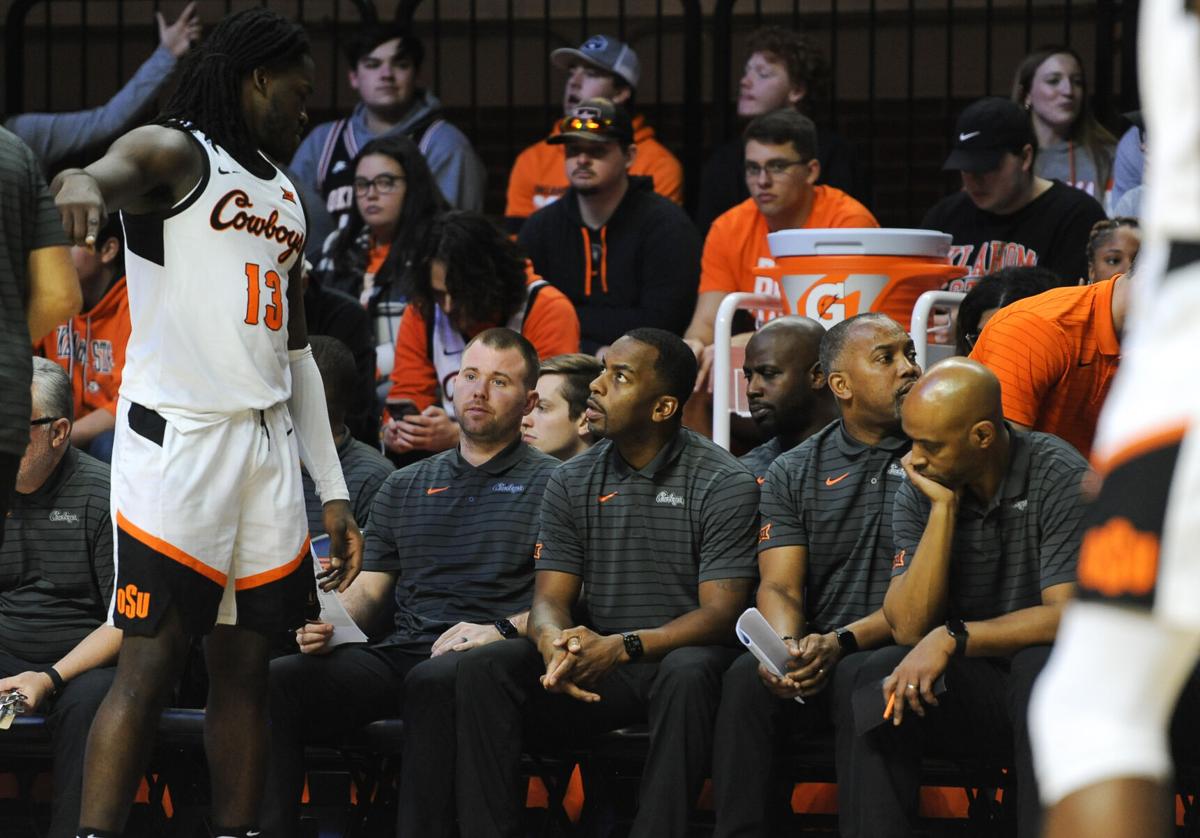 Isaac Likekele swooped toward the basket for the rebound and tossed the ball into the hoop.

In that moment, senior guard Likekele catalyzed a monumental run for the Oklahoma State men’s basketball team. The Cowboys were suddenly in sync against the most daunting foe in the Big 12 Conference, shutting down Kansas’ offense and willing their way to a halftime tie.

Then everything unraveled in the second half.

Kansas squashed OSU, 74-63, on Tuesday night in Gallagher-Iba Arena, handing the Cowboys a loss in their conference opener.

“Shot-making continues to be an Achilles' heel for us,” coach Mike Boynton said. “And we’ve got to figure out a way to do better there.”

Although Likekele briefly carried OSU’s spark into the second half, extending the run to 16-0 with a layup off a Kalib Boone assist, it eventually disappeared. The No. 6 Jayhawks figured out how to deal with OSU’s defensive power, improving their shooting percentage from 26.8 in the first half to 70.8 in the second.

Senior forward David McCormack fueled the Jayhawks with 17 points and 15 rebounds, but Likekele didn’t point to Kansas’ talent as the sole reason for the loss.

“In all honesty, it was a lack of maturity on our end,” Likekele said. “I was telling (teammates) right after the game, I said, that’s what makes the KUs, the Baylors, the Gonzagas, that’s what makes those teams great. They’re able to sustain, to play well for 40 minutes. We started off the second half pretty good.

“…But they got to a point where they knew that they needed stops in order to win the game. They buckled down; they got stops. We didn’t buckle down and get stops.”

As a senior leader, Likekele was determined to do what he could to boost his team. He finished with 16 points and 12 rebounds, both season highs, but no other Cowboy scored in double digits. OSU went 25 for 70 from the field, making only four of 17 attempts from beyond the arc.

The Jayhawks (12-1, 1-0) capitalized on the Cowboys’ offensive inconsistencies after enduring their own struggles. Kansas uncharacteristically missed 20 straight shots to end the first half as sophomore center Moussa Cisse guided OSU with relentless defense.

Cisse, who missed OSU’s matchup against Houston because of a family emergency, racked up eight rebounds and four blocks in his first game back with the Cowboys. Boynton referred to OSU’s defensive skill as “elite,” but it wasn’t enough to compensate for the missing element on offense.

“We just didn’t make enough open shots,” Boynton said. “They made tough shots. We missed open shots, and that was the difference in the game.”

The Cowboys had been navigating obstacles leading up to their first Big 12 matchup. OSU’s original conference opener against Texas Tech was postponed to Jan. 13 because of COVID-19 issues, making Kansas the first Big 12 opponent instead. Eight days before facing the Jayhawks, only four Cowboys were available for practice, Boynton said.

That could have played a factor in OSU’s ability to maintain energy, but Boynton also said he doesn’t want to make excuses. Instead, he and the Cowboys are back to work trying to figure out how to shake the shooting issues that proved costly at the end of a gutsy performance against the Jayhawks.

“You can’t ride those peaks and valleys emotionally,” Boynton said. “You’ve gotta just try to stay as much as you can in the middle of the road and do the next job the best you can, and so I think our guys are just continuing to work at it.”